Community High School’s 40th reunion celebrations this weekend brought hundreds of alumni from across the country back to Ann Arbor for a reunion picnic Saturday, a Jazz Band reunion concert Saturday night and a Comstock Reunion Concert today.
The events were organized by alumni Trevor Staples and Kelly Stupple –– who met at the school and later were married in a ceremony on the lawn  –– along with Matt Martone and several other Community graduates.

Alex Johnson, founder of the Ann Arbor Music Center, played at the Comstock Reunion concert today in his old high school band Third Rail. Johnson founded the original Comstock music festival in 1984 when he was a sophomore.

“When I started at Community my first question was: Will there be a music festival at the end of the school year?” Johnson said. “Everybody played in bands. We had a huge music scene going on.”

There wasn’t a music festival, so Johnson asked for permission to make one. He got an OK from the dean (Community has a “dean” instead of a “principal”) and $500. He organized seven bands to play, including his own.

“In 1984 you didn’t have the Internet to put your videos on or cheap, high quality video cameras to make videos with,” Johnson said. “When we started Comstock, even though there was a small crowd, we still felt like we had created something huge and permanent.”

Comstock continued until 2007, and was started up again this year by Community student Erez Levin, who studies music with Johnson at the music center.

Community is known for doing things differently. Its reunions, now held every ten years, are all-class reunions that any graduate can attend. 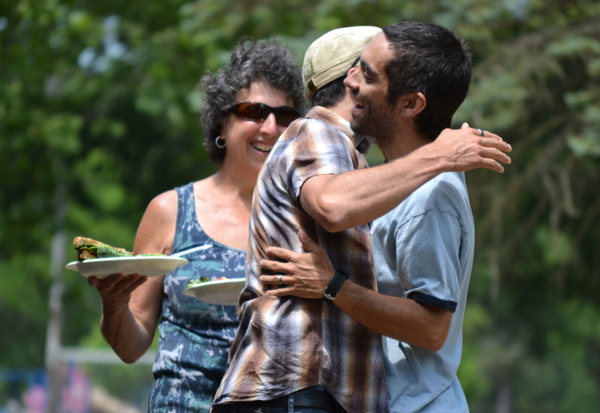 Linda Diane Feldt and Sonia Yaco graduated in the 70s, when the school had a small graduating class and a reputation for being rebellious. At Saturday’s picnic, Feldt and Yaco recalled their activist beginnings at Community–– Feldt pushed for free speech rights in the student paper and Yaco ran for a seat on the school board.

Chris Lahey, who graduated in ’95, sums up what many alumni say about the school: the place is diverse. “There were the hippies, the people in the jazz band, jocks, just every possible group had representation,” he said. “It was a little of everything, which is good, because you got to mix it up. I got to know people from lots of types of groups.” Lahey, now a computer programmer, came from Boston for the reunion.

For many alumni, going to Community turns out to be a family affair.

Leslie Wolfe and her daughter Indigo both attended the school. When Wolfe was a student, the school was so small it was at risk of being shut down. By the time Indigo attended Community, so many students applied that the district implemented a lottery system.

“I liked it there, and I thought it would be a good fit for her,” Wolfe said about her daughter. “I think it’s a great school and I’m glad it still exists. It’s a really important place for kids.”

Johnson, whose son just finished his freshman year, agrees. “It’s been good for him. It’s a great thing for people who march to their own drum.”

The Comstock music festival continues today at Wheeler Park until 8. A lineup of performances can be found at the Comstock event page on Facebook.

The annual Spring Seedling Planting on April 13 involved more then 400 students and a dozen volunteers and kicked off the growing season at the Tappan Agrarian Garden. […]

Board of Education announces two finalists in superintendent search

After two days of interviews, the Ann Arbor Public Schools Board of Education announced two finalists in the search for the next AAPS Superintendent. […]

The Ann Arbor Public Schools was recognized in a Forbes.com report this week that named the city as No. 1 in a ranking of “Top College Sports Towns.” […]