Of the many highlights of Marci Harris’ 22 years with Ann Arbor Public Schools, nothing beats the annual five-day trip to Montreal & Quebec City she started for her eighth grade French class 20 years ago.

This year, 55 students will take off for the memorable adventure that begins Friday morning with a 12-hour train ride to Montreal followed the next day by a bus trip to Quebec City’s Winter Carnival.

“When students come back to visit me over the last 20 years, they say, `When can we go back?’” says Harris, who is also the district’s world language department chair.

Quebec’s Winter Carnival is one of the largest carnivals in the world, and includes a full suite of winter activities, including passes to all the carnival’s special events, including parades, snow sculpture contests, dogsledding; and a trip to the Ice Hotel.

Eighth grader Sean Knorr, who has studied French since sixth grade, is looking forward to putting into practice what he’s learned.

“I’m looking forward to eating French stuff and getting to speak French to other people and not just people in our class,” he says. “I’m excited to go on the train because it looks like it’ll be fun.”

In fact, the train trip each way is the favorite part of the adventure for many of the kids, Harris says, noting that most have never been on a train.

Also having a great time are the five chaperones, most of whom make the trip every year, making it feel like a family, Harris says.

This will be the 18th year PE/health teacher Jon Strite has chaperoned the group.

“This is a fun time to be around the kids, with less school pressure,” says Strite, who particularly enjoys the time sledding. “Kids just get to be kids, and we can have fun.”

“He’s that crazy guy who actually goes swimming every year in Quebec City in the outdoor pool,” adds Harris. “The kids love when Mr. Strite goes out there.”

In 1998, the trip was held in the spring. The tour guides that first year, however, strongly recommended taking the kids in January for the Winter Carnival because the Quebec City people “celebrate winter like no one else.”

So in 1999, the trip was moved to January, with positive reviews.

“The best part is the moment we get into the city of Quebec, French is everywhere. It’s French first, English second,” she says.

In 1998, the trip cost $420. Now it’s $995, which includes everything. The students hold a fundraiser. Four students this year are receiving scholarships from the Slauson PTSO. The Buhr Foundation has helped in the past.

A bulletin board in Harris’s classroom is filled with pictures of the trip over the years.

One year, the kids took a ferry ride on the St. Lawrence River, and the ferry got stuck in the ice for six hours.

“You’d think that would be horrible, but the kids had so much fun!” she says.

Another year, 11 students missed the train in Windsor after their drivers took a wrong turn. So the parents kept driving and eventually met up with the train when it stopped in London.

Traveling to Montreal (the second largest French-speaking city in the world) and Quebec make sense in middle school because most of the students may go on to visit Paris as Pioneer High School students, Harris says. 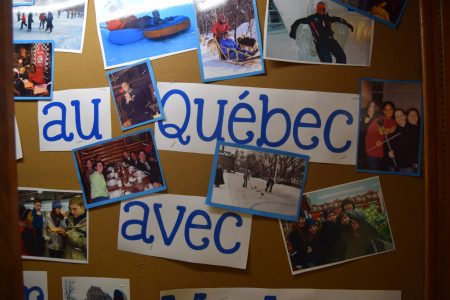 The only year Harris didn’t travel with the group was 2003 when she was pregnant with twins and under doctor’s orders to stay home. She’s excited that those twins, John and Will, will be on the trip this year.  They’ll be able to share stories with their older brother, Matt, who took the trip three years ago and is now a junior at Pioneer, still studying French and hoping to go to Paris next year.

Harris was a sophomore in high school when she first went to Paris and fell in love with all things French. She loves seeing the same look on her students’ faces when they explore the French Canadian culture and put into practice what they’ve learned.

“This trip really is,” she says, “the best thing I do here.”