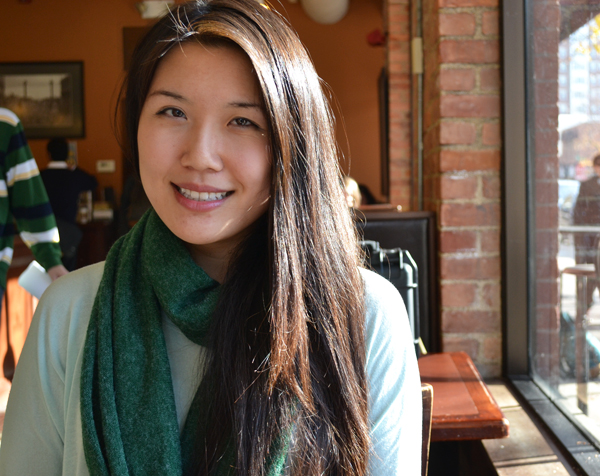 A year ago, Tao Li was in Battambang, Cambodia, one of the country’s most impoverished areas, teaching 50 children in a small concrete classroom with one window and no electricity.

She returned to Ann Arbor in May, but the AAPS graduate won’t forget about her students, whom she still calls “her kids.” They’re the subject –– and artists –– of a photo exhibition that opens this coming Monday, Dec. 3 in the gallery of the University of Michigan International Institute.

Li had just graduated from U-M with degrees in political science and psychology. She deferred her acceptance to U-M’s law school for a year so she could experience grassroots work.

In Cambodia, Li taught English, literacy and math to her students, who ranged from age 8 to 16. The education she provided was free. “The students who were selected were the most needy from that village, and so we offered them basic education training in math and English,” she said.

Another of her duties was to distribute food to the community. She says many of her students were directly or indirectly affected by HIV/AIDS.

The 23-year-old was the only volunteer from the Face to Face AIDS in Battambang, and she slowly gained acceptance from the community. She also started thinking about developing an art program for her students.

Li banded together with Kevin Shay, a photographer from the United Kingdom who was in Cambodia with his wife, a volunteer nurse at a local hospital. “We decided we were going to start a photography program for these kids who have never seen a camera,” Li said. They taught the students a few basic techniques and showed them how to use the professional equipment, which Shay allowed them to borrow.

“It was amazing seeing not only the improvements that they made in an artistic way but in their academic fields. And also the way the community kind of came together through art,” Li said.

The photos show not an outsider’s glimpse of Cambodia, but the children’s view of each other and the world around them. “I think that offers a more genuine perspective to us,” Li said. “Much more than if I were to go and start taking snapshots of these kids.”

In order to organize the exhibition, Li asked for a grant from U-M when she returned home. She was given the grant almost immediately. The small sum pays for printing, framing and advertising costs, but her friends chipped in so much that she’ll likely have some money left over –– money which she will send directly to her kids in Cambodia.

The photos at the exhibition will be available to patrons for a donation, which can be submitted separately, Li said. She will have information available for those who are interested in having a print of their own.

“I think this exhibition is a way for (the students) to actually be heard for once. These are things that no one ever knows about,” Li said. “Yes they’re poor, and things are hard for them, but they find a lot of joy in their community. I think this is a great way for us to send that message out.”

As a teacher, Li worked to help her students foster what she calls a “sustainable love of learning.” She wanted students to be curious and intellectually hungry, which was a gift given to her when she first arrived at Clague Middle School.

Li was just ten and had immigrated to Ann Arbor from China. She says that Mary Wible, her ESL teacher, “really made a difference in my life. She not only taught me to speak English, but instilled in me a love of knowledge and the drive to pursue it no matter the circumstance. We are still in touch and she has been very supportive of this whole experience.”

Aside from organizing the photo exhibition, Li is working with the Peace Corps and Face to Face AIDS to develop a library for the school in Battambang. She is also a volunteer at U-M’s Human Trafficking Clinic. And she plans to spend her spring break in Belize, doing pro bono work to fight human trafficking.

Wait a minute: isn’t she also a first-year law student at one of the top programs in the country? She grins.

“First-year law is definitely notorious for being challenging,” she said. “I’ve never had to work so hard before. But I think that I went into it knowing I want to do international human rights. It’s part of the reason I went to Cambodia. I wanted to get a feel for what grassroots work meant.

“Now I’m back here and I think my goal has been solidified all the more. I know who I’m working for. I have a reason to work even harder.”

So what are her goals? “It’s kind of too idealistic,” she said.

“I think that, as members of our small community and also of our global community, we have a responsibility to help others who are not in a place to help themselves. And I don’t mean that in a sense of just handing out free money. But to give them some skills, opportunities, as much help as we can.

“Even though we don’t see a lot of changes made immediately, I think in the long term if we just try a little bit, we’ll be able to create a better environment for everyone.

“People say that’s idealistic. but someone’s gotta do it, right?”

The exhibition, titled “Through Its Children’s Eyes: A look into Battambang, Cambodia,” opens Dec. 3 from 5-7 p.m. at the gallery of the U-M International Institute, 1080 S. University Ave. The photos will be displayed until Dec. 21.

Editor’s note: The AAPS News is featuring exceptional AAPS graduates. If you know of an AAPS graduate who should be featured, please contact AAPS News Editor Tara Cavanaugh at cavanaugh@aaps.k12.mi.us.

WITH VIDEO: Teacher Josh Tumolo gets donated goodies and others get to enjoy the music of harpist Michael O’Shiver in an all-school assembly. […]

By Tara Cavanaugh Due to a federal law, school districts must identify and assist students from homeless families. This law is called the McKinney-Vento Act, and part of its goal is to ensure homeless children […]

A series of briefs from around the district, including: WAY Washtenaw meeting June 14, Kiwanians give scholarships, One Million Reasons foundation fundraiser under way, Carpenter Girl Scouts donate to C.S. Mott Children’s Hospital and more. […]