Just back from a spring break trip to China, Holden Mass, a ninth grader at Pioneer High School, commented, “I was shocked by how many people there were;  I knew there were a lot, but…”

Holden and ten other Ann Arbor students traveled to China over this year’s spring break with their Mandarin teacher, Fan Wu.  Ranging from fourth to tenth grade and representing Huron High School, Community High School, and Summers-Knoll School as well as Pioneer, the group  visited with their counterparts from the Hangzhou Foreign Language School and the Beijing International School. The students paid for their own trip.

“The world is a village, and language is a bridge,” explained Fan Wu.  She began planning this trip over a year ago, organizing travel arrangements, making contact with schools in China, and, especially, helping her students become more fluent in Mandarin.  Her goal was to help students add to their learning with real-world experience, understand diversity, and develop a broader knowledge about China by learning about its history, religions, culture, and education. 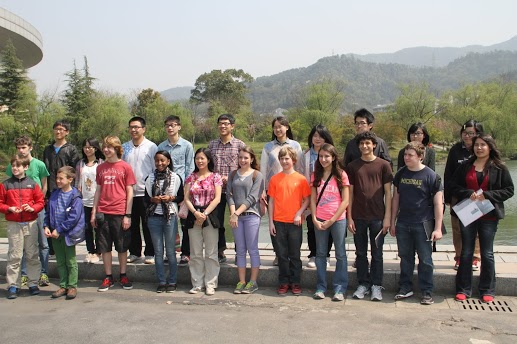 Seeing the Terra Cotta Warriors from the Qin Dynasty in 200 BC was “cool and fun,” said David Giardino, a fourth grader at Summers-Knoll School.   “The historical artifacts were powerful because of their significance in Chinese history,” said Eitan Halpern, a sophomore at Huron.  “I really liked the Great Wall because it goes on and on,” said Megan Battersby, a sophomore at Pioneer.

“I didn’t know here were so many Muslim people in China,” commented Denali Gere,  a seventh grader at Summers-Knoll, after visiting a mosque in Xi’an.  The group also visited pagodas and temples, and learned how Buddhism came to China from India.

Attending an acrobatics show in Shanghai and a Kong Fu production in Beijing, and taking a calligraphy lesson, and visiting an art gallery helped the students learn more about Chinese culture.   “The breakfasts, lunches, and dinners were really nice” said Grayson Schultz, a fourth grader at Summers-Knoll,  who encountered new foods like Peking Duck, jelly fish, and dumplings.  “I liked bargaining in the markets,” said Taylor Baughman, an eighth grader at Summers-Knoll.

Visits to the schools were a highlight because Ann Arbor students were paired with Chinese students to tour the campus, visit classes, and exchange email addresses so they can stay in touch.   “I liked that everyone was really nice there; it seems like being kind is very important in China,” said Micaela Stevenson, a sophomore at  Huron.   “They took pictures of us,” said Evan Marx, a seventh grader at Summers-Knoll.  “I was really surprised that my partner and I could talk about the economy—how the US thinks of China as a place to get things more cheaply, and how she sees China as a fast-growing country that needs more jobs for its people,” said Ariana Gould-Tasoojy, a ninth grader at  Community.

These students achieved Fan Wu’s goal of fostering international understanding through language. Owen Curnow, a ninth grader at Pioneer, summed up the trip this way:  “The people were very similar to those in the US, but at the same time they were very different.  Their culture isn’t like ours, but they are still people like us in the US.  It was an amazing and beautiful experience for me.”

Scarlett Middle School eighth-graders got a taste of multiple career choices during the school’s annual Portfolio Day, which teams students up with local professionals who share their expertise about the working world. Also this month, the A2Y Chamber honored the program with its Exemplary Educational Endeavors award. […]

Members of the Angell Elementary Ecology Club have the right idea: They’re finding to encourage sustainability, recycling and using fewer resources and spreading the word throughout their elementary school community. And a Burns Park teacher takes her green passion and translates it into a lesson for students. […]

Ann Arbor’s top administrator announced on Aug. 13 that he will leave this fall to be closer to family in North Carolina. The board will formulate a transition plan in the coming weeks. […]