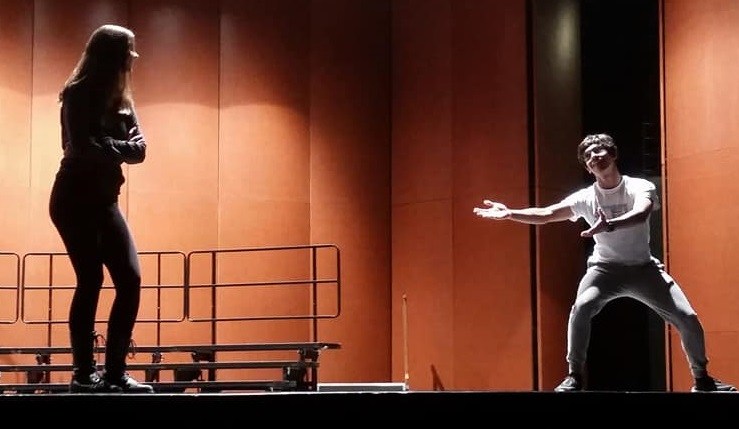 Set in the 1950s, The Pajama Game is a musical labor war for wages and love when the show’s two opposing characters find romance. And the Huron Players along with the Huron High School Music Department, will bring it to the community in February with an enthusiastic cast of budding thespians and talented musicians.

Junior Arun Bhattacharya and Claire Brinley, a seasoned Huron Players senior, are among them.

“I truly think that musicals are fun to watch live, especially one created by a student-produced group,” said Bhattacharya, who has acted in six other Huron Players productions. “This just means that students, with homework and stuff, are invested enough in order to put on such a large play.  I think that amount of effort alone says something about the quality of the production.”

He’ll bring to life the role of Sid Sorkin, shop superintendent at the Sleep-Tite Pajama Factory and Sid is a character he identifies with – in some ways.

“He [Sid] works hard for what he wants and has a go-getter attitude. We both have goals that we feel the need to achieve.  I am glad to say that my methods of achieving my goals are very unlike the way that Sid goes about doing stuff.”

Bhattacharya considers having a director with a sense of humor a big part in his enjoyment of this production.

“He is a very focused guy and gives us freedom to explore our characters,” he said, of Jeffrey Stringer, the adult sponsor and producer who directs the student-led show. “He’s also just a nice guy in general, so that really helps.”

“To me, and to the rest of the students he works with, Jeff is always open to suggestions from the cast, and frequently lets us add bits that end up becoming our favorite parts of the show. He’s always there to encourage our creativity and allows us to make our performances our own,” Brinley said.

“I have never felt that I wasn’t listened to, or that my opinions were disregarded. He [Springer] has always treated me and the rest of my peers with respect and with the intention to get to know us as individuals as well as actors.

“I know that this type of caring, flexible director isn’t easy to find, and Huron Players is lucky to have him.”

Brinley described her experience in the The Pajama Game, her 14th Huron Players production.

“I play feisty union member Babe Williams, who is head of Sleep-Tite Pajama Factory’s grievance committee,” she said. “I relate to Babe’s passion. She is vocal and confident, albeit a bit headstrong sometimes, and she’s not afraid to take charge of her life. While she tries to uphold a reputation as a professional woman, she still knows how to have a little fun.”

As Brinley’s high school acting career nears its end, she expresses her passion about The Pajama Game, considering it a production no one should miss.

“The Pajama Game is special because it’s crafted almost entirely by the high schoolers themselves. If you see the show, you will see actors on stage in colorful costumes designed by students, dancing the choreography taught by students to music played by students,” Brinley said.

“It wholesomely displays the enormity of talent at Huron. If you happen to be in the Ann Arbor area the second weekend of February, you can’t miss it.”

Stringer is a 1991 Huron High School graduate and a proud former member of the Huron Players who is excited to bring this adaptation to the community.

“For example, you know it’s a ‘traditional’ musical when the two leads are supposed to fall in love instantly because after literally meeting twice,” he said. “To make that feel real is a huge challenge, but this is just one of many examples in which the actors pull it off.”

There have been obstacles, including the a present-day context of a show taking place in a 60-year-old era with elements and conventions that were quite traditional in the musicals of the period.

“The manly hero, the machismo and chauvinism of the male characters, the token guy who hits on everyone, the female chorus being kind of ditzy and not given a lot of depth,” he said. “Our big challenge was, to not only make the characters real people, but to take these situations between characters which could be viewed through a modern lens as chauvinistic and mildly harassing and, purely through the wonderfulness of the actors, make them less threatening and more playful in an honest, human way.”

The actors have pulled this kind of thing off without having to change a word of dialogue.

“You will see one of the area’s finest groups of young actors, backed by some typically-superb student musicians, breathing new life, originality and true humanity to an old favorite, he said. “Even if you’ve seen The Pajama Game before, you’ve not seen it done like this. “The Pajama Game is a lot of fun.”

The Huron Players and the Huron Music Dept. presents “The Pajama Game”

ADMISSION: $15 general admission, $13 students/staff/seniors Tickets can be pre-ordered at www.showtix4u.com.