Skyline ELA teacher Jeff Austin says he’s not an emotional person but admits he was deeply touched to be named a finalist for the Ann Arbor/Ypsilanti Regional Chamber’s 2017 E3 Teacher of the Year.

Austin, who is also the founder and director of the school’s Writing Center, happily accepted the award at a surprise party last week, then listened as student after student thanked him for the many ways he has helped and inspired them.

“Hearing their words was a career highlight for me,” Austin said later.  “I’m also exceptionally fortunate to be surrounded by great colleagues and administrators who believe in me enough to continually support my programs.”

Austin teaches English, humanities and writing at Skyline, where he’s been for the last six of his 11-year career. 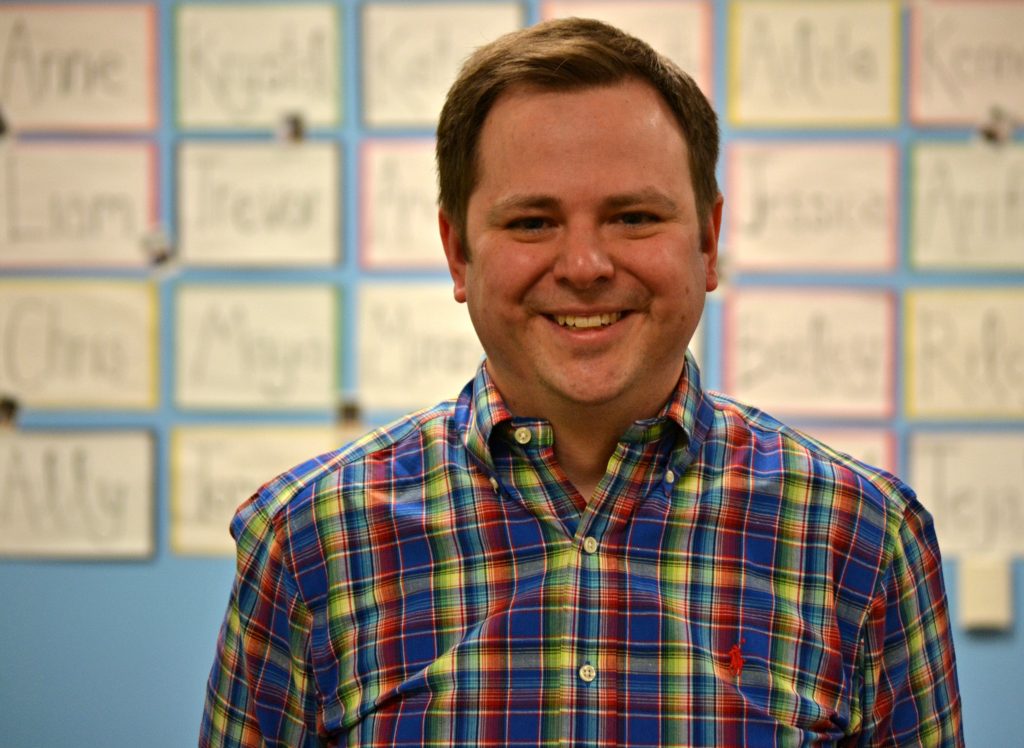 He began the Writing Center program in the 2012-2013 school year to help students become better writers through the assistance of their peers. Students train to be writing tutors, and then spend a period each day consulting with and tutoring students who come for advice. Tutors also sometimes go to classes where teachers have requested help with a special project.

The center is a valuable resource partly because it is peer-led, noted Skyline Assistant Principal Casey Elmore, who said there has been a marked improvement in writing scores since it was initiated.

Principal Cory McElmeel said Austin started the Writing Center on his own, in addition to his regular full workload, and has built it to one that is now studied by districts across the country.

“Jeff Austin has always been a teacher to go above and beyond, and to make strong connections with students,” said McElmeel, just prior to the surprise party/announcement. “We often hear that students coming back from college saying that his class is the one that prepared them most for life and the college world. Jeff’s an amazing staff member and we love to have him here.”

Austin’s student teacher this year, Rachael Kermath, wrote a letter to the selection committee nominating Austin for the honor. 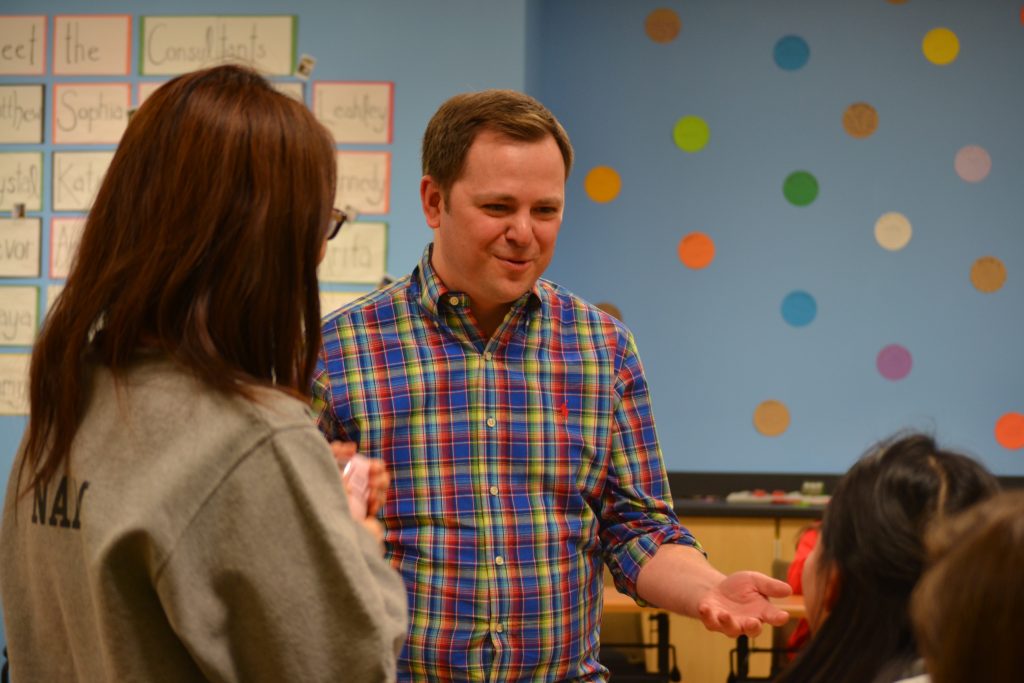 “When he’s in the classroom, students adore his humor and teaching style as he works with them to create new understandings of difficult texts, write arguments and fiction to express new thoughts, and discuss ideas in a productive and meaningful manner,” she wrote. “However, this does not happen overnight, and the amount of work Mr. Austin dedicated to teaching his students is inspiring to me as a beginning teacher.”

At the beginning of each trimester, Austin works hard to get to know his students, talking to them outside of class, getting to know their “real lives,” and asked them to share their strengths in English with him, Kermath noted.  She said each day, Austin checks in with Writing Center tutors, preparing for one-on-one and class-wide tutoring sessions, examining data gathered from students who visit the center, and prompting his tutors to reflect on their tutoring techniques.

One of his current students, Christopher Morgan-Martin, noted that Austin is the kindest and hardest working person he’s ever known. 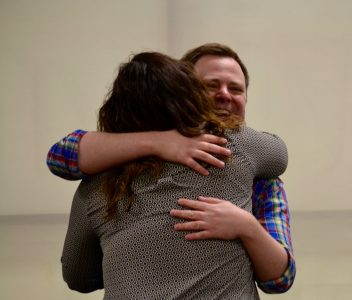 “As a teacher he is incredibly organized and engages in conversations with his students about the material,” he wrote. “As a writing center director he takes time out of his life to plan events and connect with other writing centers in the state and in the country.”

“Mr. Austin is nothing less than exceptional,” wrote student Miranda Stuart. “I’ve never had a teacher more passionate, linguistically eloquent and academically motivation. He encourages all of his students to work harder in every aspect of their lives.”

Noted student Star Su: “Whether it’s writing pedagogy or examining ideology, his passion for what he teaches is absolutely infectious. His life-changing lectures that push students to stretch and grow their abilities immensely as a thinker, reader, and writer, beyond their imagination.”

Christine Modey, director of the Peer Writing Consultant Program at the University of Michigan, wrote a two-page endorsement of Austin. The two have worked closely together during a three-year partnership between the two writing centers.

“He impresses me as one of the most theoretically sophisticated secondary school teachers I have ever known, but one who wears that sophistication lightly and is able to bring it to bear in relevant and interesting ways for his students,” she wrote. “With his guidance, his students (particularly in Humanities) are able to see the world and themselves in new ways because of Jeff’s ability to make literature, and the theories we use to analyze it, matter: intellectually, emotionally, spiritually.” 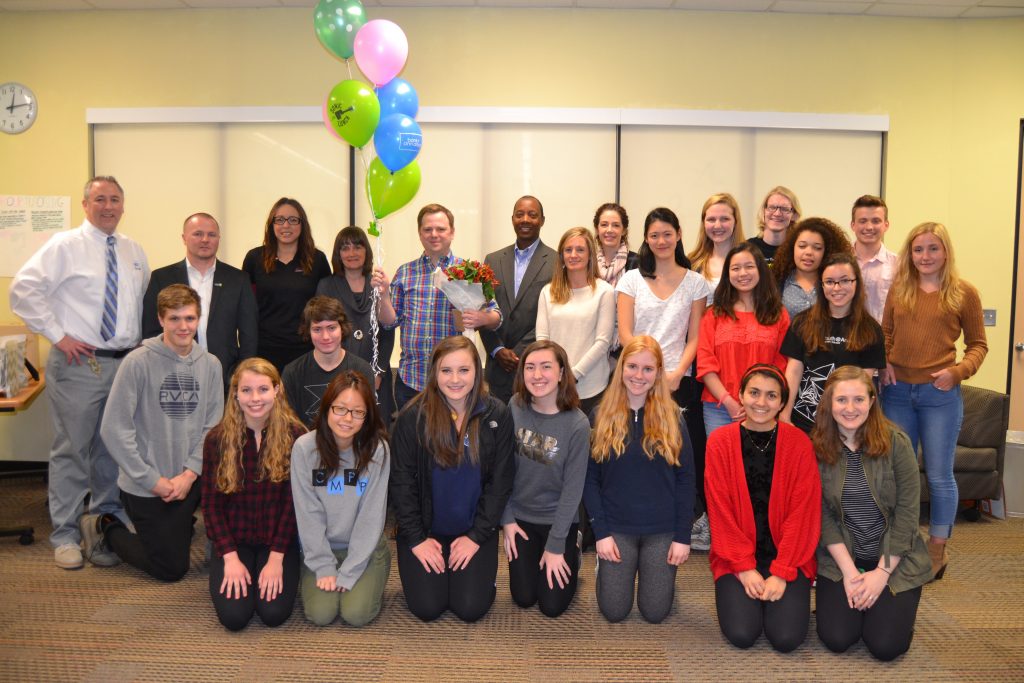 Austin said he’s thankful for those who spent their time and energy on my nomination for the award and for the surprise party.

“The most priceless part of this process was being able to share it with my students who inspire me with their dedication, imagination, and curiosity,” he said. “We wouldn’t have a Writing Center without 30 incredible tutors who give their all every day in the service of others, and Humanities wouldn’t be as successful as it has been without students who are open to challenging themselves to see our world differently.”

His writing center life began as an undergraduate at U-M when his poetry professor nominated him to be a consultant in the Sweetland Center for Writing.

Prior to teaching at AAPS, Austin taught for five years at Berkley High School in Berkley, Michigan.

He lives in Ann Arbor with his wife, Michelle.

Austin received $500 for his second runner-up award. The winner of the E3 Teacher of the Year Award was AAPS theater teacher Quinn Strassel. First runner-up was Noncy Fields of Ypsilanti Community Schools’ Holmes Elementary. The award is sponsored by LaFontaine Motors.