AAPS theater teacher Quinn Strassel is on a paternity leave following the March 30 birth of his third child. So when he stopped into Community High School Thursday afternoon, he thought he was there to talk with Dean Marci Tuzinsky about something of a sensitive nature.

Instead, dozens of cheering students and colleagues, along with wife Adrienne Pisoni and newborn Marion, were gathered in the theater as he learned he has just been named the Ann Arbor Ypsilanti Regional Chamber of Commerce’s first E3 Teacher of the Year.

“I feel like I’m surrounded by rock star teachers every day who deserve an honor like this more than I,” said Strassel.  “But I will always be thankful for everyone who helped write letters and make this happen.  I don’t know if there are words to describe what it means to me.” 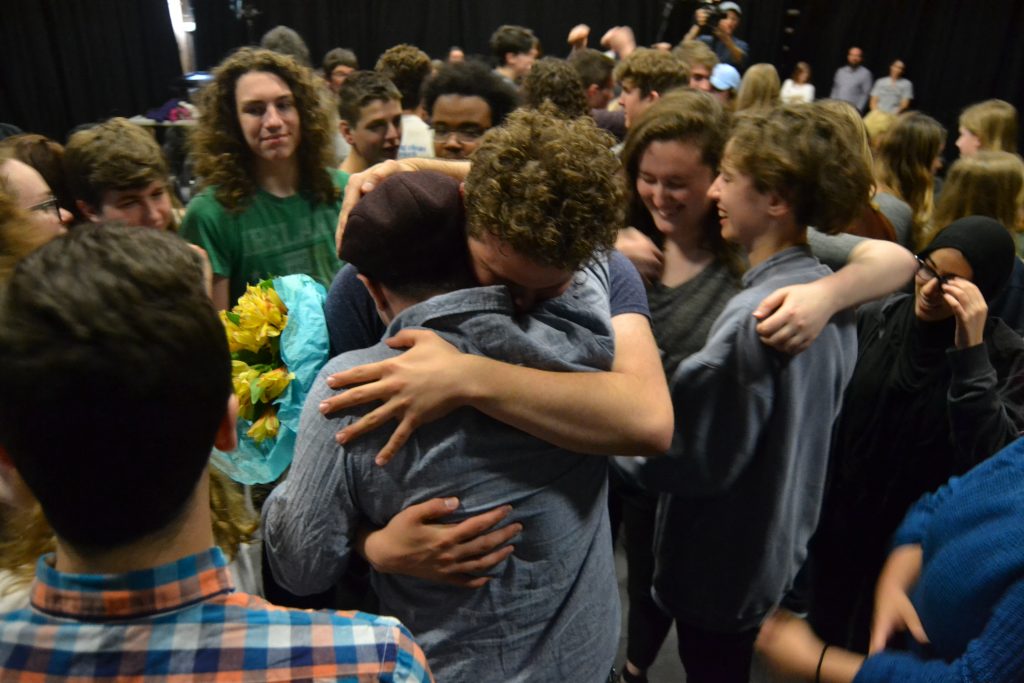 The county-wide award is sponsored by LaFontaine Automotive. As the first place winner, Strassel will receive a two-year lease of a new car—just what the family of five needs, he said.

Strassel , who was featured as an Exceptional Teacher in the AAPS District News in November of 2015, was selected from among many applicants as a teacher who is a visible and vocal representative of what is exemplary in the profession, explained Tuzinsky. 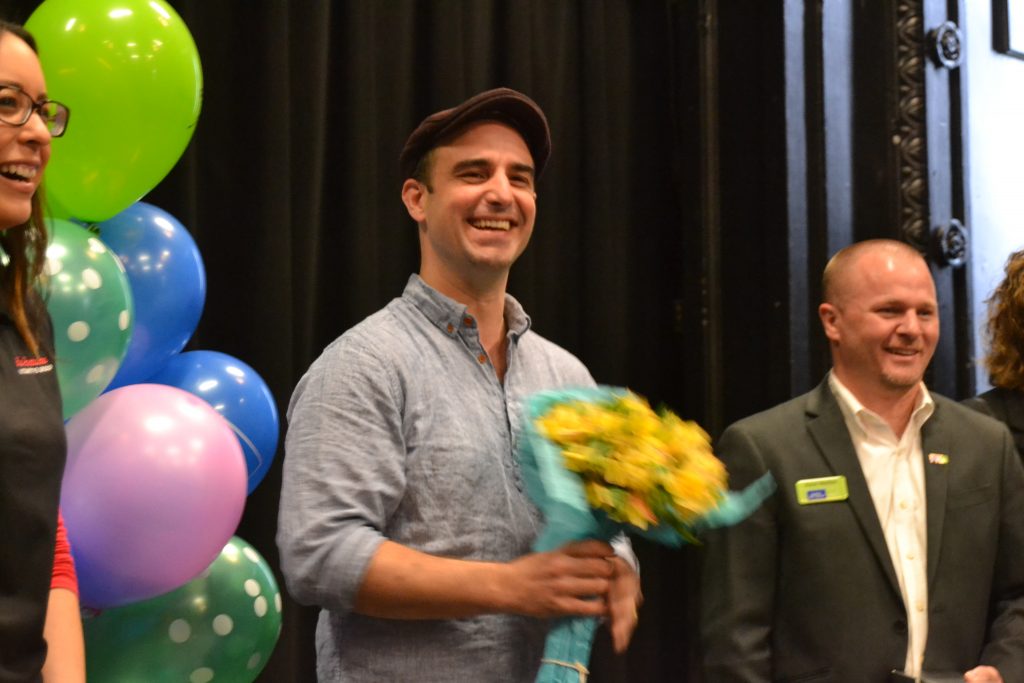 One look at the thick nominating packet sent from Community High on Strassel’s behalf, and it’s easy to see why the award committee named him the winner.

It’s packed with letters from staff, students, and parents giving detailed accounts of why they believe Strassel is so exceptional. 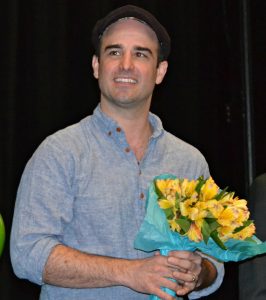 Many noted the special role Strassel played in supporting the family of Justin Tang, a CHS junior and a core member of Community Ensemble Theatre who was struck and killed by a car last fall.

In her letter to the award committee, Assistant Dean Karen Siegel noted that Strassel not only comforted students, but was invited by the family to lead Justin’s service.

“This is as true a testament to the respect and trust he engenders as any thing could ever be,” she said.

Senior Ruby Lowenstein called Strassel “the most dedicated teacher and person I have ever met.”

Noting that Strassel creates a sense of community in his classes, Ruby told how Strassel intervened when a student’s father was detained by Immigration and was in danger of being deported.

“Betoul’s father was not deported, largely because of the work that Quinn did for that family,” she wrote. “He was not expected to do so much, and he was not paid. Everything Quinn does comes straight from his heart.”

Ruby said Strassel also took students who did not have a lot of support at home on college visits and walked them through the application process, even paying the application fee for one student who could not afford it.

“He is a remarkable person who has ignited my love of theater, and has forever changed my life,” she wrote.

Siegel noted that this year’s production of “Fiddler on the Roof” may have been the finest piece of theater she’s ever experienced.

“Quinn made this happen by teaching his students how to inhabit the worlds of people very different from their own,” she said. “He did this by introducing students to a wide range of theatrical material over the years. You can see that he draws from classical plays, musical theater, experimental theater and many other dramatic genres.”

Community High School psychologist Sandra Wong wrote that Strassel goes above and beyond for his students. She said she has been in countless IEP meetings where students and parents have talked about how their child has found success, enjoyment, social acceptance and a purpose by being a part of Community Ensemble Theatre (CET).

“CET is quite the diverse group of kids that Quinn has taught to be accepting and supportive of each other,” she wrote, adding that parents have said that their children found real purpose in helping to create something successful, thus giving them joy and a boost in self-worth.

As a professor of curriculum and instruction at Eastern Michigan University, Ethan Lowenstein—who was once named Teacher of the Year in New York City schools—noted in his letter of nomination that he knows good teaching.

“And I have never met a teacher like Quinn Strassel,” he wrote. “Quinn is naturally gifted as a teacher, but it is his ability to relentlessly lead students to new heights and see the absolute best in themselves and in others that sets him apart.”

To be eligible for the award, the Teacher of the Year must serve an active role in the community, as well as in the school district.

Strassel has directed the Burns Park Players in several productions and is the founder of Michigan Teacher and Allies for Change (MTAC) a coalition of teachers, parents, students, and administrators all working to advocate for strong public schools in Michigan.  The Strassel Forum takes part in several community service projects each year.

Strassel, an Ypsilanti High School graduate, received a B.F.A in Theatre Performance from the University of Michigan (2001), a post-bachelors teacher certification from Eastern Michigan University (2002), and a master’s in broadcast journalism from Boston University (2007). He began his teaching career at a public high school in Brooklyn, N.Y. and has been teaching at Community since 2011.

This school year, he taught classes at three schools: Pathways, Claque Middle and Community High, where he teaches acting and Forum, which includes academic and personal mentoring, community service, service to the school, and student governance.

In addition to teaching classes, Strassel spends many school nights in the theater directing three productions per year: two plays and one “24 hour Theatre” production where students write, direct, act and stage a series of plays within 24 hours.

Milo Tucker-Meyer, a 2016 CHS graduate, said that Strassel made sure every student knew exactly how valuable they are to others.

“He would tell us about staying in the moment and being fully present, fully alive,” he wrote.

Second runner-up for the award is Jeff Austin, who teaches English/humanities/writing at Skyline High School, and will be profiled next week in the Ann Arbor District News during Teacher Appreciation Week.

Award recipients will be recognized at the A2Y Early Edition Breakfast on May 17 at the WCC Morris Lawrence Building.