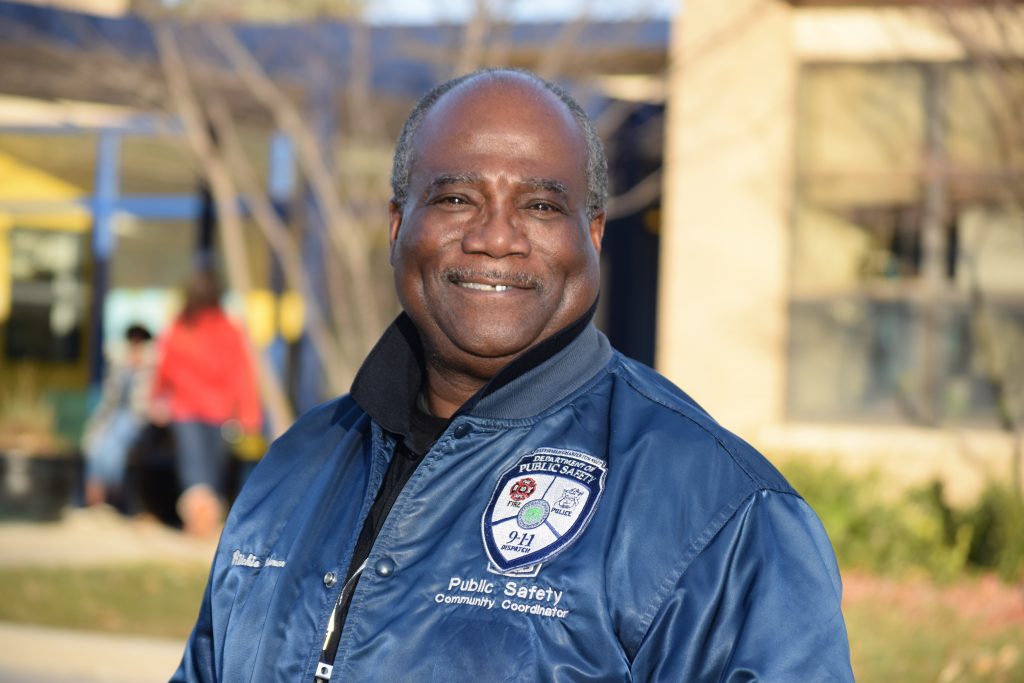 Carpenter Elementary has welcomed seven new principals over the last 27 years. Each time, Pittsfield Township’s Public Safety Community Coordinator Ritchie Coleman was one of the first to introduce himself.

“I wanted to make sure I told them, `I’ve got your back,'” says Coleman.

Helping keep Ann Arbor Public Schools safe is one of the roles Coleman will miss most when he retires at the end of next week. For 27 years, Coleman has been Pittsfield Township’s liaison to the district on safety-related committees and endeavors, including safety response plan development and scenario training.  Stranger danger, cyberbullying, pedestrian safety, ALICE training, fire prevention, and lock-down drills are among the topics he’s taken on to increase the awareness of safety procedures among district students, parents, and staff. 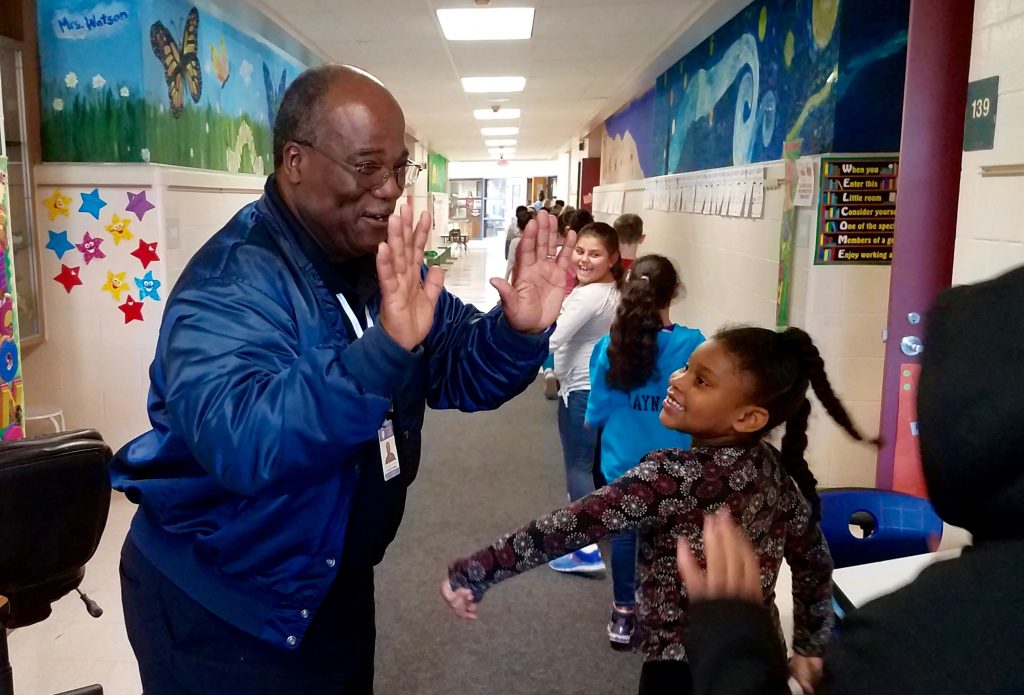 “It’s been a labor of love,”  says Coleman, a civilian who works closely with police and firefighters. 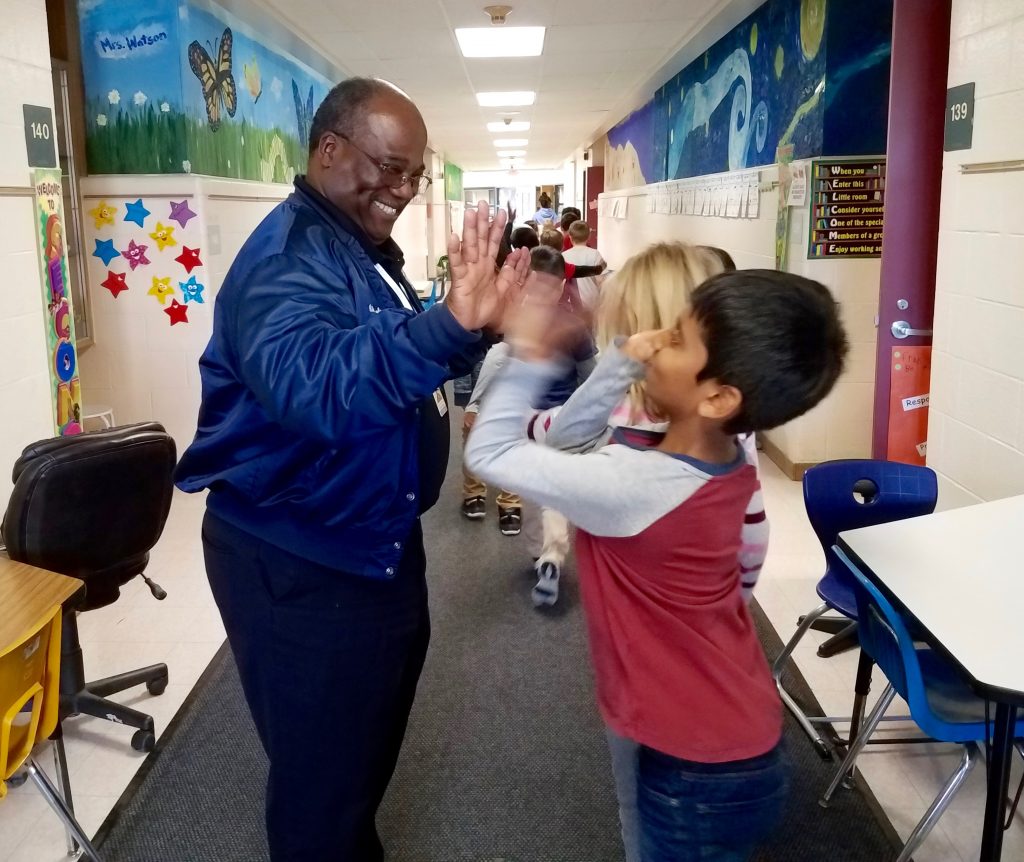 While his work has been district-wide, Coleman has been especially close to the Carpenter community, where he checks in with the crossing guards, patrols the area, networks, and shares safety tips at school assemblies.

“I don’t know what we’re going to do without him,” she said. “He makes Carpenter feel so much safer. He’s a part of our family.”

Carpenter Principal Michael Johnson says that of all the phrases he could use to describe Coleman, “servant of all” comes to mind first.

Coleman, in turn, notes that Johnson has done a “tremendous job” making the diverse Carpenter community feel welcome and included.

He is also happy that AAPS has a new administrative position to oversee student and school safety.

“With the current climate nationwide, we need to have a lead person in every school district who not only understands the dynamics of each of our buildings, but also how to protect those buildings,” he says of the role filled by Liz Margolis, with whom Coleman has served on committees over the years. “There is so much behind-the-scenes training that must be done. The one slip-up is where we could have someone get hurt or lose a child, so it’s important to have an ongoing evaluation and critiquing, and work with multiple agency responses.”

When people ask Coleman if he worries about being bored in retirement, he assures them there’s no chance. As one who writes, arranges, produces, plays drums and sings,  Coleman is eager to create more music to share on his music site.  Over on his radio station on www.Jango.com, he has  28,000 followers. And he’s part of the praise and worship team at Oakwood Church in Saline.

Coleman’s message is nothing if not consistent, and has written songs titled,  “Youth to Youth, I’m Drug Free,” “Don’t Drop out of School,” and “We are Community-Taking a Stand Against Hate.”

He sums up his music as “positive prevention entertainment with a top 40 twist.”

Coleman has been married for 34 years to his wife, Phyllis, a retired Lincoln Middle School social worker.  Their daughter, Britney and son, Alex, studied music at Ann Arbor Open and Huron High School.  Britney now lives in New York City and has performed on Broadway.

Coleman says his family has benefitted tremendously by music education at AAPS.

“Many districts have eliminated the arts because of budget cuts but the music programs here in the Ann Arbor Public Schools district are some of the finest in the world,” he says. “It is such a great opportunity for students to have that ability to get access to the bands, the choirs, the orchestras. Those skills will be with them for the rest of their lives.”

Coleman and his identical twin brother Ronnie—also a musician—grew up in Saginaw, the middle of 10 children raised by a minister and his wife.

“There were always people in the church who needed something, so we were always a part of giving back,” he says. “So giving and reaching out has been a part of our family. All 10 of us went to college, and all the things we’ve done throughout our professional careers has been to give something back.”

He’s the only one of the four sons who did not become a pastor.

“I think my father said it best one time when he had an opportunity to come and see one of my shows,” he says. “He said that what we were doing with music and that positive message was something that you couldn’t do within the church’s four walls. This was a message that was beyond that scope. He put his arms around me and said, `Don’t ever stop doing this.’”

Coleman has no intention to stop the music. But his days with Pittsfield Township are indeed coming to an end next week.  And while he’s not sure yet who’ll replace him, he says that person will continue the connection with the AAPS.

In the meantime, he hopes his work in community policing has broken down barriers.

“I’ll miss seeing the children every morning; high-fiving them as we cross them at the school crossing locations; seeing them on the playground having fun,” he says. “But also knowing this is one part of their interactions with an adult that we always want to be positive. I hope that all those in law enforcement and those who are representing public safety services are always there for our children so they have no doubt that if they need help, they can get that from someone in uniform.”