Standing tall in a banquet room at the University of Michigan earlier this month, the 60 AAPS seniors couldn’t have been more proud.

They were celebrating the end of their high school careers, a busy four years full of AP/AC classes, volunteering, athletics, arts and studying like mad. They were headed off, bright-eyed, to universities across the country, and many of them had sizable scholarships.

Many would be the first in their families to attend college. Many were classified as economically disadvantaged. But that didn’t matter. They were the first senior class to graduate from the Rising Scholars program. After four years of the program’s academic guidance and college preparation, they had become scholars, and they knew they could rise to whatever greatness they aspired.

Four years ago, though, the students couldn’t have known that this is what they were heading for. Back then, the program was just an idea spelled out in a letter sent home to a group of then-eighth-graders’ parents. The letter explained that the Rising Scholars program was new and the benefit of a partnership between the district and the U-M Center for Educational Outreach. The program was going to provide support for their children for four years during high school, it said.

The students were selected based on test scores, grades, positive behavior, attendance records, and –– most importantly –– socioeconomic risk factors. Hispanic, African-American and economically disadvantaged students were targeted the most.

But why single out kids who are already achieving?

“What we find is that those students, even if they have good grades in middle school, those grades drop in high school,” said Brandon Jackson, the Rising Scholar coordinator at Huron.

“So what we like to do, is while that kid is doing well, is expose them to these different opportunities of not just being average, but excelling.”

“We’re looking at students who we see potential to achieve,” said Dawn Richberg, the Rising Scholar coordinator at Pioneer. “We want to nurture, develop, push, challenge, and help these students become college ready.”

For four years, the Rising Scholars are pushed to take challenging AP/AC classes and earn good grades, pushed to think about their future goals and dreams, and pushed to make a plan to get there. And they’re nurtured, too: they get studying help, tutoring sessions, and they’re made to answer that question: Who am I?

“Who am I?” can be a tough question for a teenager to answer. But Rising Scholars freshmen are faced with it in their first semester in high school, in a Freshman Leadership class.

“That first semester we want to identify: Who are you? What’s your plan? What does that look like over the years?” Jackson said. 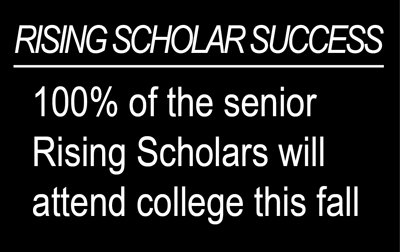 Pioneer senior Lena Mitchell said she would not have taken AP History if she weren’t encouraged by the Rising Scholar coordinators. “Nobody wants to memorize dates. I was like, Oh no. Not at all!” So what changed? “They boosted my confidence,” Lena said. She was reminded that she could go to tutoring sessions the program provides, and that other Rising Scholars would be in her class as well. “They said, ‘Lena. We got you. Now go do this.’”

Another way to support Lena was to support her mom too. “If she was slipping on any assignments, grades, had something going on socially, or had anything going on, I was going to know about it,” said Lena’s mother December Venson. “They would email me, call both of my phones. The program has really helped me.”

In addition to keeping parents updated on their students’ progress, the program educates parents about both high school and college. The coordinators help them research colleges with their student, fill out a FAFSA form and understand financial aid.

Lena knew she had a support network, a family she calls it, at home and at school.

“My momma always told me ‘You’re as smart as you want to be.’ And for the Rising Scholars coordinators to say what my mom has always said too, I thought: Wow, maybe I can do this.”

Rising Scholars learn that relationships are key to success. “You build these relationships with these people and actually hear them out, they’ll help you. A lot,” Lena said. “A lot, a lot, a LOT.”

Huron senior Malik Hall learned the importance of relationships during his time in the Rising Scholars program. Malik is heading to Eastern Michigan University this fall on a full scholarship and a living stipend; it was just one of many attractive offers he received from schools around the country. His offers totaled over $112,000.

But he wouldn’t have gotten so far without the help of many adults along the way. Huron’s college and career counselor convinced a University of Arizona representative, who was driving back to her home state, to come back to Michigan just for the chance to talk to Malik. Malik’s track coach introduced him to a group of engineering alumni from U-M who now want Malik to work with them on building a super-modified race car. And it was the coordinators in the Rising Scholar program who discovered that Malik, who helped students troubleshoot their computer issues (even taking computers apart), didn’t have a computer of his own. So they arranged a donation for him.

“Almost every single success I had in high school has derived from building relationships,” Malik said during his keynote address at the Rising Scholars Senior Recognition Ceremony at U-M earlier this month. 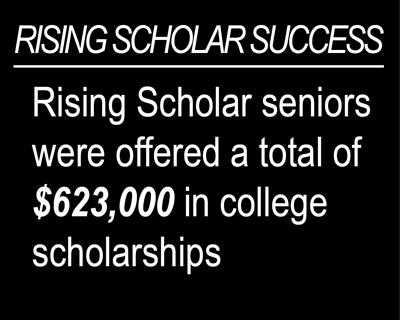 Malik was talking about symbiotic relationships. There’s no better example than within the Rising Scholars themselves.

The seniors make sure to mentor the younger scholars –– even if that means giving them a push.

“I see that when I was a freshman and I was young I needed a lot more guidance,” said Pioneer Rising Scholar Jaqueleane Jones-Washington. “That’s why I try and help other freshmen now.”

How does she help them? “I just try and make sure they keep up with grades and stuff,” she said. And she watches them: “They like to play around in class. They think coming to school is basically about being around everybody else, and being with friends, and looking good and all that, when really, you’re coming to school to get an education and all that other stuff is secondary.

“So I try to make that known. They get annoyed by it. But in the end I tell them, ‘You’re going to thank me. If I wasn’t this hard on you who else would be?’”

Some of the younger students admit that they look up to the seniors. “They’re all so inspiring. Like Bianca Williams. She helps me study. She’s great. And all the rest of the scholars. I want to be like them. I want to be a 12th grade scholar that everyone looks up to,” said Huron scholar Riahanah Ali.

“Sometimes they just help each other and we see that,” said Denise Eaddy-Richardson, a counselor at Huron who works with Jackson on the program. “And there are times when one needs a lift, and another will come and tell us.”

Eaddy-Richardson works to make the Rising Scholars schedules coordinate, so that they can help one another in class, especially in the AP and AC courses.

Doing this helps the students walk into their accelerated classes with confidence –– which is important because sometimes those classes aren’t very diverse, Jackson said.

“You realize that it’s OK to be a smart minority,” said Skyline Rising Scholar Janae Sims. “You don’t have to be dumb and in the back of the class. You can be in front, asking questions.”

Janae’s realization that it’s OK to be both smart and a minority student paid off. She earned $31,000 in scholarships to Alma College and she will be the school’s first African American female basketball player this fall.

The future of Rising Scholars

Relationships are one of the key ways that the program is successful for its students. But it turns out the program could use some relationship strengthening of its own.

One of the program’s challenges, said Assistant Superintendent for Secondary Education Robyne Thompson, is that it’s become fragmented between the buildings.

“We’re trying to make it a district program, not a building program,” Thompson said.

Thompson has been meeting monthly with the coordinators. “I feel like we’ve come a long way in revamping the program, while working with the U-M Center for Educational Outreach as a partner.”

The overnight, as well as a summer camp every year for all of the Rising Scholar students, are some things that Thompson says are successful in the program.

“It has the potential to be a phenomenal program,” she said. “It has been a very good program with lots of potential, but now we’re moving forward in terms of having everybody on the same page.”

A bittersweet farewell to the first senior class

Jackson, who has been with the program since its inception, is proud of the first graduating class of seniors. But he’s also a little sad to see them leave.

“Those kids believed in something that was not there, that was abstract, just a vision,” he said. “Those kids are pioneers in taking these classes and taking on this role.”

Although it can be easy to blame poverty and racial identity for causing kids to not succeed, he added, the program helps the students recognize what troubles they may face –– and rise above them.

For Richberg, the program’s goal is simple. “We have under-represented and under-served students. We don’t see them as much on college campuses. And if we say we want to provide equal opportunity for all students, well that means we’re going to have to support students in the way that they need to be supported.”

The Rising Scholars program provides students many ways to be supported. “And  a big piece of it is getting them to recognize who they are, that they are people with multiple gifts and responsibilities, not only to themselves but to society that is much greater than they are,” said Eaddy-Richardson. “They learn that they are to have a positive impact.”

Saturday School is a student-led project designed to raise academic achievement for all students at Huron High School. […]

By Tara Cavanaugh Each year the Ann Arbor / Ypsilanti Regional Chamber of Commerce gives out E3 Awards that recognize educational programs or educators for their “exemplary education endeavors.” The AAPS Health Science Program was […]