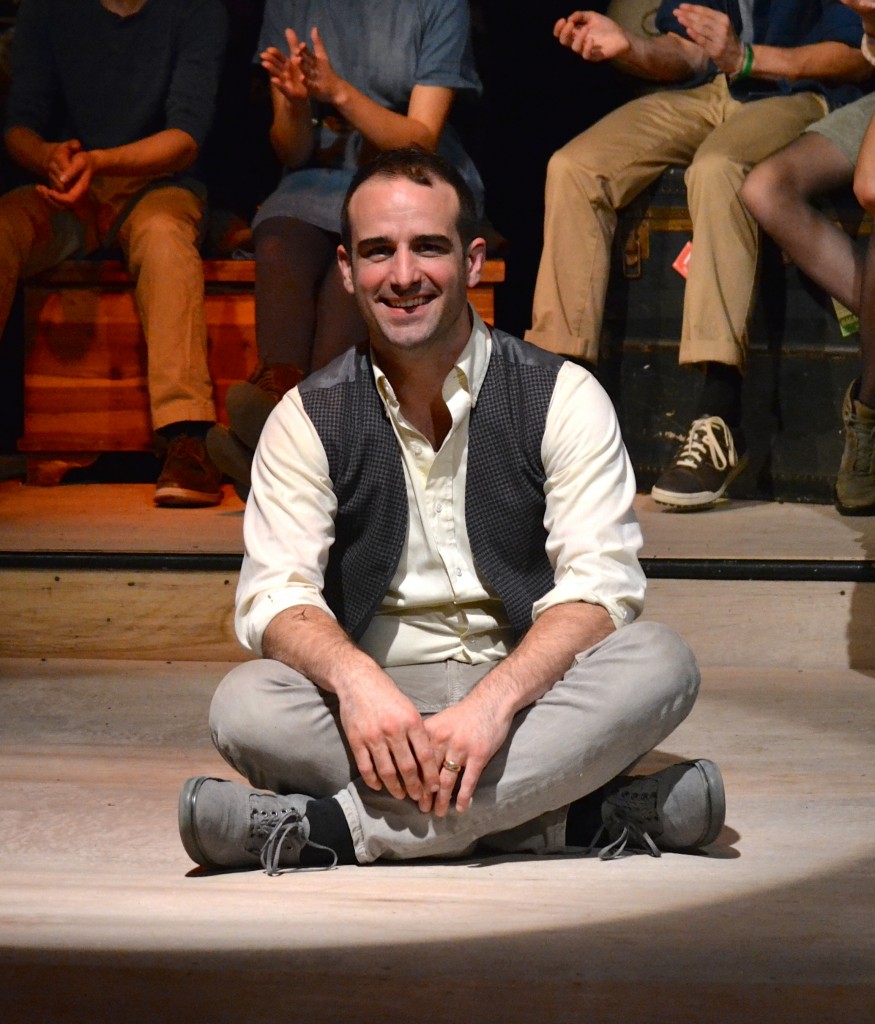 Quinn Strassel received a B.F.A in Theatre Performance from the University of Michigan (2001), a post-bachelors teacher certification from Eastern Michigan University (2002), and a master’s in broadcast journalism from Boston University (2007). He began his teaching career at a public high school in Brooklyn, N.Y., where he directed four plays, including West Side Story, A Midsummer Night’s Dream, and Oedipus REmiX (a hip-hop adaptation of Oedipus Rex).

Strassel left teaching to pursue a master’s in journalism and worked for two years as an on-camera personality for a Boston-based music website. But he soon missed teaching and began applying to teaching jobs across the country in 2009. That year, he was offered a job at Huron High School and moved back to Michigan.

In his spare time, Strassel likes to play guitar and write songs. He also acts and directs professionally and will be directing this year’s production of “My Fair Lady” for the Burns Park Players.

He and his wife, Adrienne Pisoni, a therapist in downtown Ann Arbor, have two children, Sebastian, 4, and Luisa, 2.

Are some people surprised to hear that acting classes are offered at AAPS? Acting classes used to be more prevalent when speech was a required course in Michigan schools. There used to be a full-time acting/speech teacher in most Michigan high schools as recently as a decade ago. So, it’s true that acting classes are becoming rare. But I’m working with the remaining acting teachers in the district to rebuild the demand for acting classes. It’s been incredibly rewarding to travel to Clague, Pathways, and Community and see how well kids respond to the curriculum.

What do your students get from acting class, and does the class attract students beyond those with a flair for the dramatic? Acting classes expose kids to the arts, give them a chance to play, and help them learn to present themselves in public. It’s funny because I think the kids who benefit from my classes the most aren’t the “theatre kids.” I love it when a painfully shy kid works up the courage to perform a monologue in front of my class. That’s something she’ll remember for the rest of her life.

What’s your favorite of your multiple roles at AAPS? Teaching acting? Teaching forum at Community High? Or serving as theatre director of the Community Ensemble Theatre? It’s impossible to pick a favorite—all three of my job responsibilities add up to the perfect job for me. Forum gives me a chance to get to know kids at the deepest level for four years. Teaching acting gives me the chance to travel across the city and teach kids who might not otherwise be exposed to theater. Directing the Community Ensemble Theatre provides the ultimate artistic satisfaction—I can take chances on new works by up-and-coming playwrights, off-Broadway hits, and even Shakespeare—and the kids and parents respond so well. We’ve got a ton of kids involved and they’ve really bought into the ensemble culture. It’s not about being stars. It’s really about working together and supporting each other the whole way. It’s been a special thing to be a part of it. 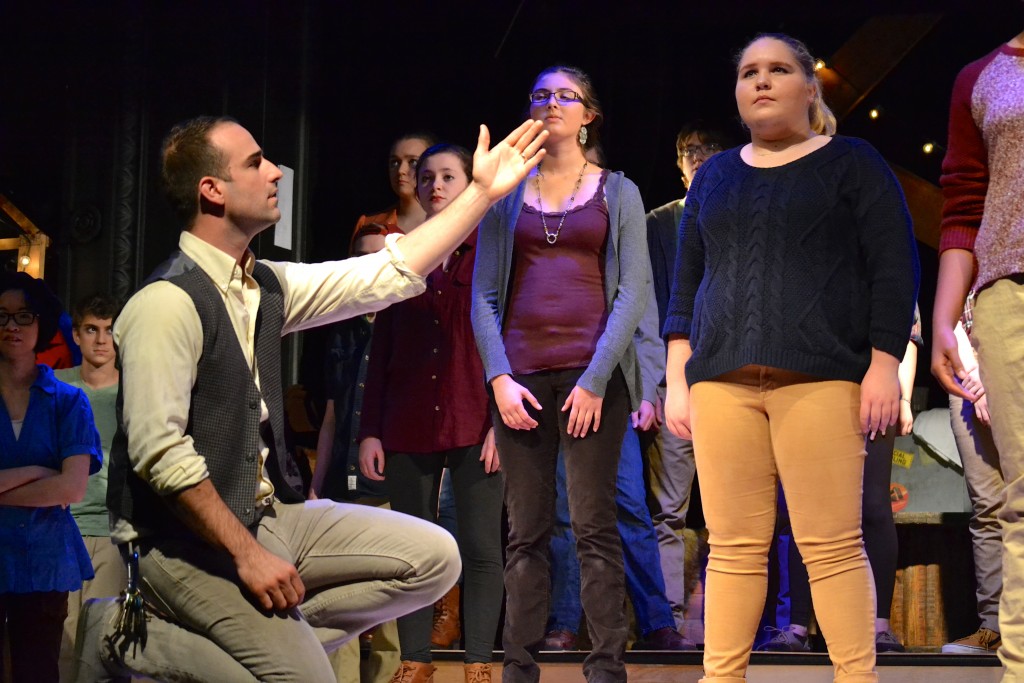 When did you get the acting bug? When I was 11 years-old, I was cast as Dill in the Ann Arbor Civic Theatre’s production of “To Kill a Mockingbird” at the Lydia Mendelssohn theatre. Our director was an amazing woman named Elise Bryant—a brilliant artist, civil rights leader, and labor activist. She created such a rich artistic environment and helped our cast bond in a deep, meaningful way. I think I’ve spent the rest of my life trying to recreate that experience for a new generation of kids.

If you weren’t a teacher, what would you be doing? It’s hard to imagine myself doing something other than teaching. I thrive on connecting with other people and I’ve learned that I need my work to be meaningful. Maybe I could see myself being a social worker like my wife.

What makes you well suited for the job? I’m not afraid to make a fool of myself. Last year, I took a bet with my students that they couldn’t raise $1,200 for Food Gatherers. When they did, I had to grow a beard and then shave everything but a ring of hair around my head. It was literally the worst haircut in the history of mankind, but the kids were motivated and they really got into it. I do small versions of that on a daily basis.

What do you now know about teaching that you didn’t know right out of college? Coming out of college, I really didn’t understand or fully appreciate the role kids’ families play in their education. In Brooklyn, I encountered so many different students with different family backgrounds and if I didn’t understand where they were coming from, I had no shot at reaching them. And now that I’m a dad, my appreciation for the family is that much stronger. As cheesy as it sounds, I look at every one of my students now and know that they’re somebody’s baby. I’ve got to do whatever I can for that kid. 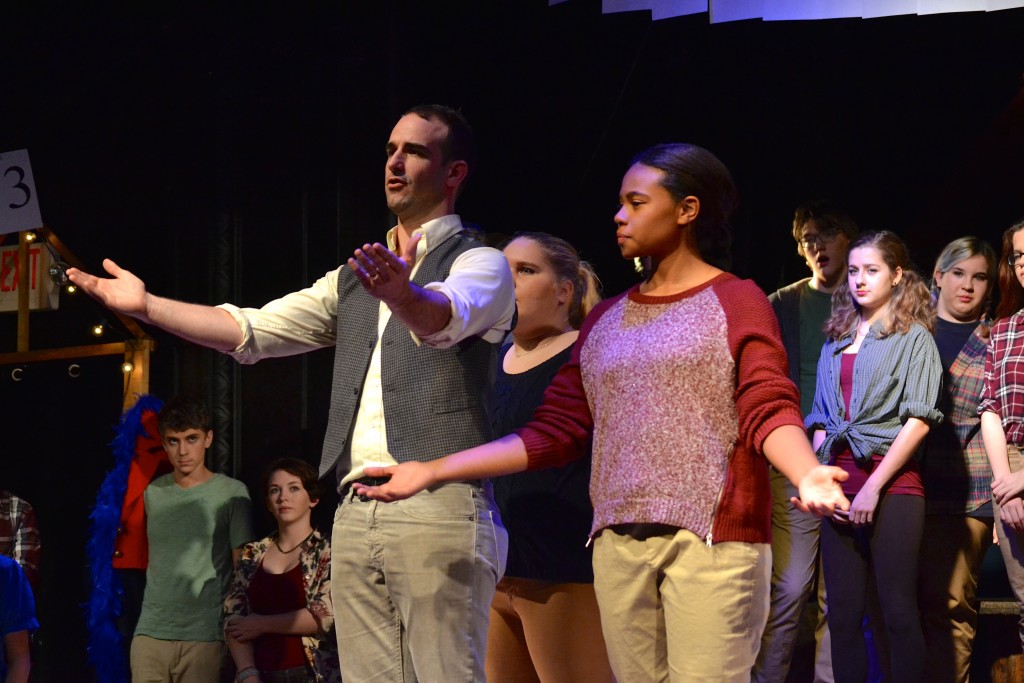 When did you realize you wanted to teach? When I first started teaching in Brooklyn, I thought it was a temporary situation—just a way to pay the bill until I could start acting. It wasn’t until I left teaching and pursued my career as a journalist and performer that I realized I had made a mistake. I was having a lot of fun in my on-camera job but I didn’t feel nearly as fulfilled as I had when I was teaching. I remember waking up and telling my wife, “I need to go back to teaching.” That was the first time I saw teaching as a career.

What has been the most surprising part about being a teacher? I am constantly surprised and amazed by how much kids grow from their ninth to twelfth grade year of high school. A couple years ago, one of my students was accepted to the same theatre program I attended at the University of Michigan. He had played several leads for me in his junior and senior years but I never would have predicted that when I met him as a freshman. Every year, I’m blown away by how mature and brilliant these kids get in those four brief years.

AAPS is emphasizing the value of caring this year. Have you seen an example of this recently?  There is a para-professional at Clague Middle School named Matt Curry who is an unbelievably caring person. He’s started stopping by my acting class this past semester to check in on a few of my students who were struggling. He plays some of our theatre games with us and he’s also willing to take kids aside when they get angry with each other or frustrated. He is a true gentleman and he has this kind way of talking to a kid where he can call them on disruptive behavior and still communicate that he cares about them. And he really does. We talk for five or ten minutes after class all the time about what we can do to make a better experience for each kid. 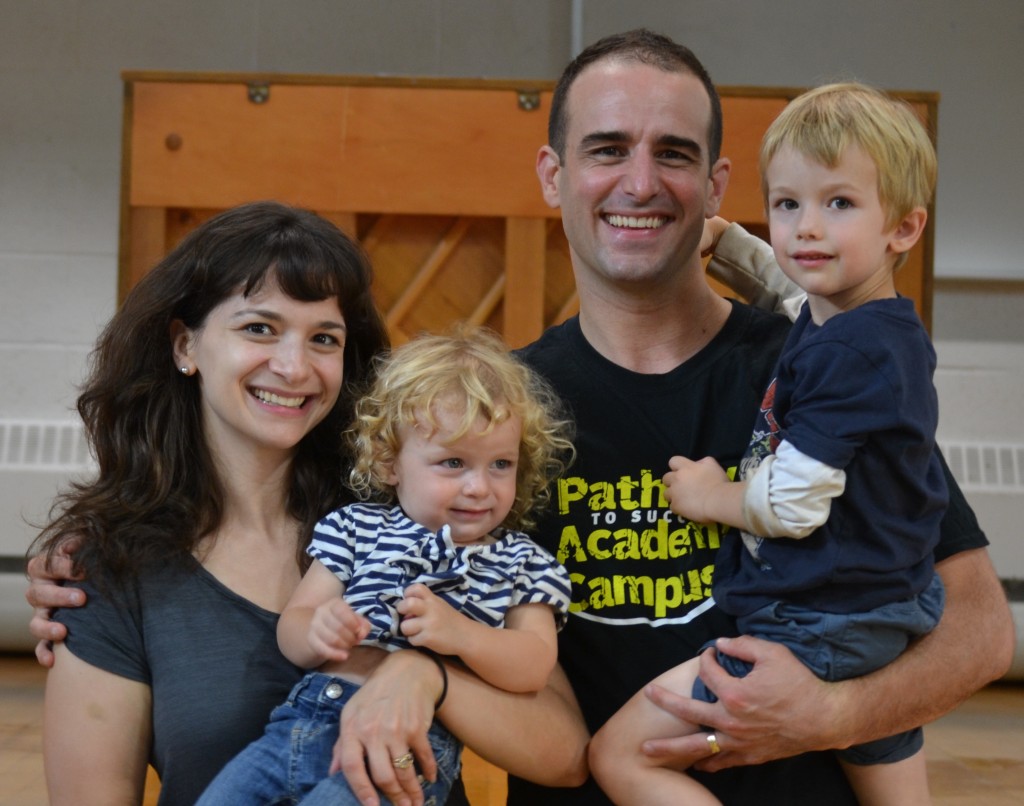 You married your Ypsilanti High School sweetheart, who was also a talented performer in school.  Do you continue to act together? It’s amazing that we haven’t crossed paths artistically since high school. We used to do shows then but she was more focused on musical theatre in college and I did more traditional, straight plays. Since then, we’ve taken turns performing, especially now with kids. We’ve both acted professionally in the area but never at the same time. Someone needs to put them to bed!

Besides your phone and computer, what gadget do you find indispensible? I’m not much of a gadget guy, though I’d be lost without my phone. Is a guitar a gadget?

What’s your best timesaving tip? Travelling between schools has forced me to be efficient with my time during the work day. I try not to pack lunches that need to be heated up. I certainly don’t recommend eating while driving but I’d be lying if I said I don’t do it occasionally!

What are your top 3 tips for new teachers?

What was the most rewarding experience of the past school year? At the end of last school year, the students in my theatre group (Community Ensemble Theatre) held elections for this year’s student board. Dozens of students ran for the six board positions and each wrote a speech about how much the group meant to them and how much they wanted to give back to future students. Each speech spoke of a culture of kindness, acceptance, and accomplishment. I was overwhelmed, almost moved to tears. It was one of those moments where I could honestly say there was nowhere else I’d rather have been. I’m so lucky to work with these kids.

What doesn’t the general public understand about a day in the life of an AAPS teacher? I think our community generally loves and supports teachers but I don’t know if anyone fully appreciates how inspiring it is to work alongside the teachers in the Ann Arbor Public Schools on a daily basis. Traveling to three schools, I find myself surrounded by hardworking, caring, brilliant professionals. Every once in awhile I read a news story about a problematic individual teacher and it’s disappointing because 99.9 percent of the Ann Arbor teaching force is just so extraordinary. It’s nice of you to do this story about me, but I can tell you that I am surrounded by extraordinary professionals every day. I’m just trying to keep up with them!