As students and their families wind down from the rigors of a school year and look ahead to summer, the Ann Arbor Public Schools is gearing up for a summer loaded with projects.

The work is funded either through the 2004 bond or the district’s 2010 sinking fund. This is voter-approved capital improvement money that can be used only for specifically earmarked projects and not school operations. 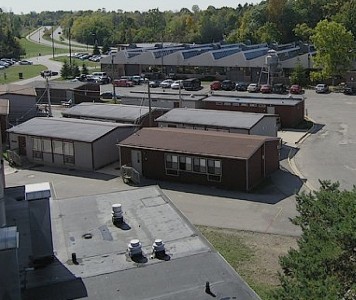 Most of the projects can be done only when school is in recess.

The largest of these is a $1.7 million project at Pioneer High School, where a city of portable classrooms will make way for a student courtyard green space, the cafeteria will be expanded and a large domed skylight added, the entry/office and corridors renovated and changes are planned to the culinary arts and business lab areas as well as roof and boiler repairs. 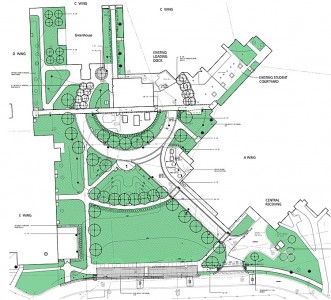 “It’s going to be quite dramatic,” said Randy Trent, executive director for physical properties. “It’s going to have a very different feel.”

The Pioneer project is the finalé in the district’s Capital Improvement Project, funded by a 2004 bond issue, which allowed the district to complete a large variety of work including construction of Skyline High School. The construction manager for the project is Lansing-based Granger Construction with bids awarded to nine contractors for the summer work.

The most substantial change at Pioneer will be removal of 15 portable classrooms on the south end of the building that have been in place for decades. In their place will be a large expanse of green space with lawn and trees, where students can study, play and spend time out-of-doors.

“We looked at how we could bring spaces and give more opportunities for students,” Trent explained. “They’ll use it. They’ll love it. It won’t be this portable village anymore.”

Preliminary work is set to begin today (June 21) with major demolition taking place the coming few weeks. Interior construction is scheduled for completion in mid-to-late August and student courtyard construction will be done by the end of October to allow the fall season for sodding. The courtyard will also include plenty of trees as part of the green space plan.

The change will also limit vehicle access to the south area, which is a safety improvement at Pioneer, Trent said. “All car entry (to the area) will be controlled now.” Also, Chartwells (the district’s food service provider) will work out of Skyline High School during the summer months.

The portables will be removed and some of the furniture will be reused and a movie company will pay the district to make use of old chalkboards and whiteboards as well as old desks, Trent said. He noted that a portable classroom unit will be used south of the Community Education & Recreation Department for another school year while the school continues its transition downward in size as Skyline High School gears up for a full four grades.

Other summer construction projects involve paving, roofing, required Amerians With Disabilities Act changes and work to improve energy consumption in the district. All work is being paid for out of the 2010 district sinking fund.
These projects include:

Trent noted that the current economy has allowed the district to get good pricing on projects when bidding. “We’re able to get a lot more for the money,” he said, thus allowing the district to do more with the projects. “Residents supported us in tough times and they’re getting the benefit for it now.”

In addition to hardscape projects, the district is also using to make the best use of district dollars by putting maintenance staff into teams this summer to clean school buildings. “This lets us be more efficient and schedule around construction,” he added.

The Ann Arbor Public Schools Rec & Ed offers tuition preschools at Allen and Thurston Elementary. Students who are age four by 12/1/2013 are welcome.

The Ann Arbor school board has approved participation in a countywide International Baccalaureate school and students heading for Japan raise money for their trip. […]