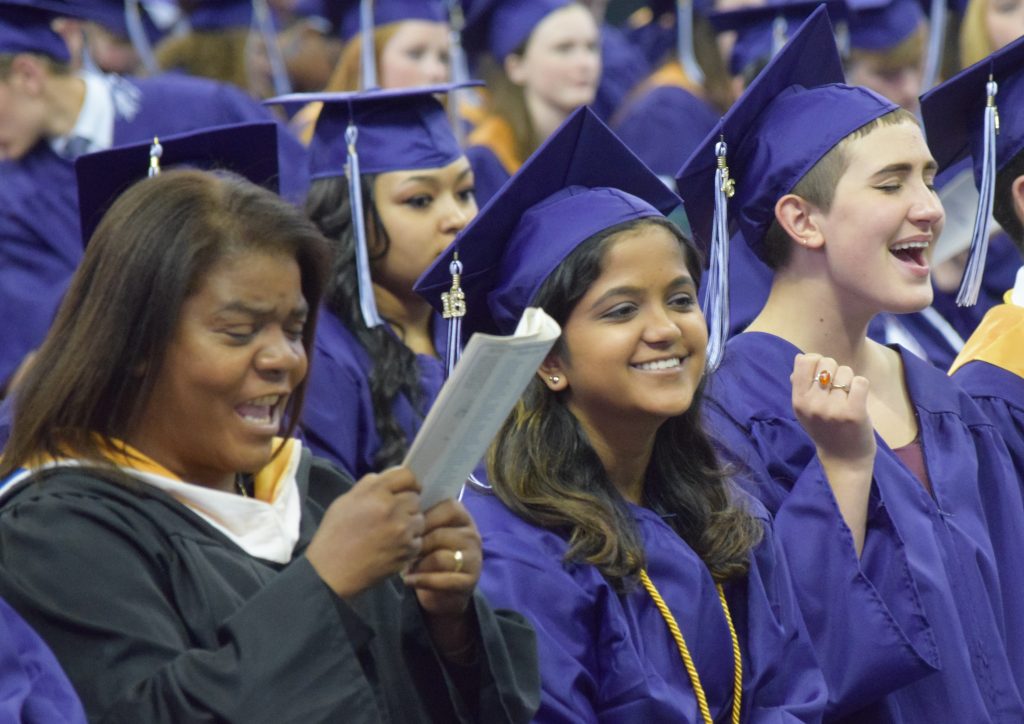 Pioneer High Schools graduates were told to take risks, prepare to face adversity, and not give up if they still haven’t found themselves yet at the school’s 2016 Commencement Ceremony. 407 seniors received their diplomas and graduated from Pioneer High School, Thursday evening.

Student speaker Basil Baccouche urged his classmates to take risks, step outside their comfort zone, and even scare themselves a bit. He said it takes some risks to succeed and he has big plans for his classmates and the world in the years to come, “I hope that the millions of refugees across the world who are separated from their families, who don’t have enough to eat, who don’t have a roof over their heads have found some form of relief through the kindness of others,” Baccouche said. “I hope that we as humans are taking much more serious steps towards improving and preserving our ecosystem. I hope we have found ways to balance out economic inequality, ways to eliminate institutionalized racism, and of course I hope you’ve found your own way to be happy, doing what you love, with people you love.”

Baccouche added the class of 2016 have already accomplished a lot by earning a diploma from one of the most academically challenging high schools in Michigan. He said it took a lot of work to graduate, but students didn’t put as much time into this accomplishment as others in the Pioneer family. ”For every hour we put in, we have a teacher, or counselor, or a coach, or administrator who put in ten, and I would be remiss if I didn’t offer you all my sincerest thanks on behalf of the graduating class of 2016. You all have had a very positive impact on our lives.”

One of the teachers that helped make a difference for Pioneer’s class of 2016 was Tyler Vess. He was selected to give the keynote address and congratulated the graduates on their many awards, trophies, and acceptance letters from top universities, but Vess also cautioned the graduates that they will still face adversity, “Please don’t take your achievements for granted and don’t assume nothing can go wrong, some struggle on their own,” he said. “You may move away from those that support you and you might be lonely at first, that’s ok.”

Vess also asked the graduates to be empathetic to classmates who struggled more to reach graduation. He encouraged these talented students who have not yet realized their potential by highlighting early challenges overcome by successful people like Oprah Winfrey, Charles Darwin, Walt Disney, and Stephen Speilberg. He also mentioned a more personal struggle. “Then there is the 17-year-old with the 1.9 GPA who was told by his manager that he just wasn’t McDonalds material and was fired. Now he’s giving a commencement speech,” Vess said.

He added, “We’re fortunate to live somewhere where we get second chances if we dream big and work hard or moderate success if we just show up and dream medium. The choice is yours.”

Commencement also served as a chance to celebrate the accomplishments of the class of 2016. More than 200 members of the class earned 3.5 or high grade point averages this year. Six seniors received special awards or scholarships based on leadership, citizenship, and academics. Basil Baccouche won the Horatio N. Chute Award, Avishag Eliav claimed the Alice Porter Award, John Fisher and Charity Foster were presented the Dr. Martin Luther King, Jr. Memorial Award, Emily Gunderson earned the Mary Ellen Lewis Humanitarian Service Award, and Zahra Sule received the Emerson Powrie Memorial Scholarship. The entire class will also be remembered thanks to the gift of a pair of benches for the Pioneer grounds and funds for the incoming-freshmen transition program.