When Stephen Easter died of hypothermia following a canoeing accident on a father-son campout two summers ago, his family and friends were consumed by grief.

But last week, the Bach Elementary community gathered on a warm autumn evening to celebrate a new amphitheater built into the hilly playground that will for years to come pay tribute to the hazel-eyed boy who loved to perform.

“Magical” was a word heard more than once to describe the upbeat evening, where student drummers lined the walk greeting guests, who later grabbed percussion instruments themselves to celebrate the arts in this new outdoor venue specially designed to honor Stephen.

“Stephen loved Bach School,” said his maternal grandmother, Janine Easter, who lives in Ann Arbor with her husband, Stephen, a retired University of Michigan biology professor. “I remember how proud and happy he was when I accompanied him to the school bus on those special days I spent with him.”

Stephen William Osler Easter died in the summer of 2013, when he and his father were returning from a canoe trip to North Manitou Island. They were about a mile from shore when a wave threw them into the 55-degree water.

The idea of the theater began in the spring of 2014 when the PTO wanted to do something to memorialize Stephen. Fundraisers followed, along with a $10,000 donation from the Buhr Foundation.

The final goal of $57,000 has nearly been reached, and the Buhr Foundation agreed to match any donation up to $4,000 at the ribbon cutting, which was attended by more than 200 people of all ages who gathered in Stephen’s Theater on its opening night.

Several people noted how much Stephen loved to perform, and would do so spontaneously, grabbing a toy to use as a microphone, or an old badminton racquet as a guitar.

His grandmother said Stephen would visit her about three times a week, where he held finger puppet shows, built elaborate structures of magnetic modules, and had fun pounding on an electric keyboard.

Stephen’s teacher, Jamar Humphrey, recalled the day during snack time when Stephen spontaneously broke out into song and drumming. Children at the next table joined in, and the next, and the next.

“So he pretty much orchestrated a choir at that point,” Humphrey said, to laughter.

Stephen’s parents, Will Osler and Kim Easter, were profuse in their thanks to everyone for their various contributions to the project.

Kim Easter asked the children who contributed in any way to creating the theater named for her son to raise a hand, then applauded when so many hands went up.

“It was a group effort to make this come true,” she said.

Thanking the “amazing” community of Bach and greater Ann Arbor, Will Osler said the project gave his family something to look forward to, and added something very positive to their lives.

“If you’ve lost someone, you realize that sometimes you feel their presence, and it can be in a random moment or memory,” he said.

“In the last two painful years since Stephen died, it took a while, but finally I took a page out of Stephen’s book, and tried some creative expression through music,” he said, noting the healing power of self-expression.

He said Stephen would often perform his own special brand of street theater, and he loved the outdoors.

“So he would run right down and check out that stage,” said Osler.

A dream becomes a reality

Colleen Monahan Smith told the crowd that her son, Patrick ate lunch with Stephen every day through all of first and second grade.

“When Stephen died, I had no words for Patrick and there was nothing I could really say,” she said. “But I knew that we should do something to honor who Stephen was, and to find a way to always remember him.”

She said many ideas were discussed, but when someone mentioned an amphitheater on the big playground, everyone knew it was perfect.

“This is what happens when you dream big,” she said.

She gave special thanks to Marty Grimes and the Buhr Foundation; Dan Morris; the crew from Michigan Hardscape; members of the AAPS School Board and administration; and the Stephen’s Theater Project Committee members and the fifth graders who kept the project moving forward.

“The whole process has been very heart-warming,” he said, as guests arrived for the evening. “To think that a little boy like that should inspire this kind of activity! Bach is such a warm community.”
He explained that parent and landscape architect Shannan Gibb-Randall designed the amphitheater with five rows of stone seating in honor of Stephen’s birthday of May 5, 2005, and performance spaces are in the shape of an “S” for Stephen. 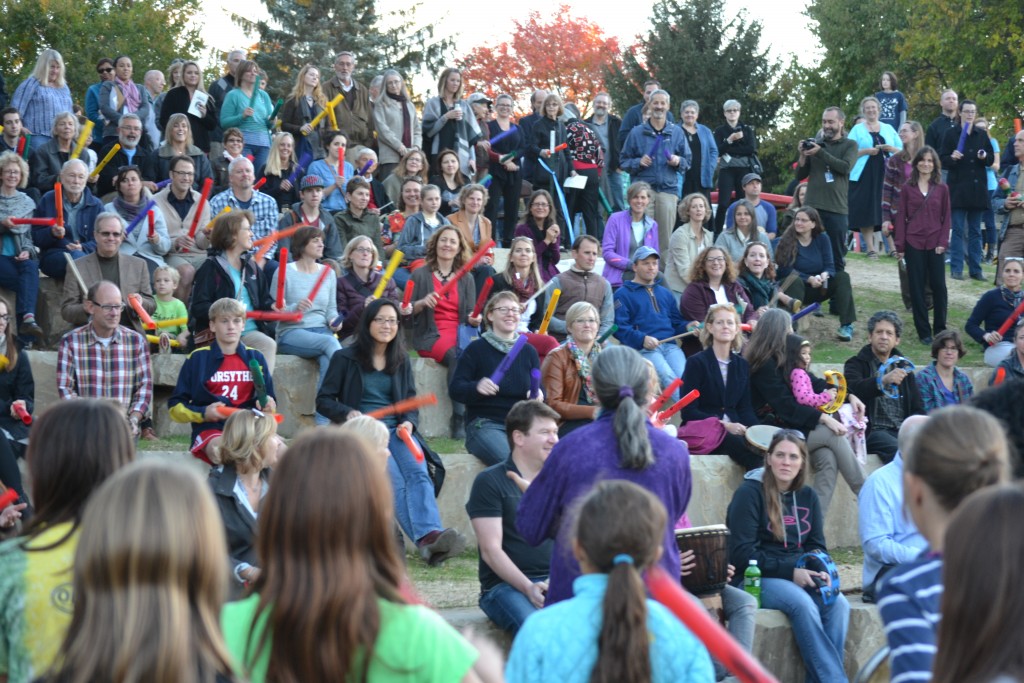 Stephen’s classmates raised more than $4,000 for the project in a variety of ways, including lemonade stands at U-M football games, donations, and handmade jewelry sales.

Easter said he’s happy to know that the school playground is used as a neighborhood park when school is not in session.

“I’m delighted that something like this is here for them,” he said. “It’s low maintenance, and built at no cost to the taxpayers of Ann Arbor Public Schools.”

He said he and little Stephen were very close.

“We were blessed to live in the same town as our grandchildren,” said Easter.

When asked how he was able to endure the loss, he said: “You grit your teeth and get through it.”

Janine Easter said she is overwhelmed with gratitude for the community effort.

“The future was robbed for us and our hearts are broken, but we’ve learned to go through it,” she said. “You never get over it. But things like this are an amazing help.”

Later, to the crowd, she said that the theater will benefit the entire Bach community, and pointed out that the top stage is handicap accessible.

She reminded the crowd that the theater will serve many uses: an outdoor classroom, a site for concerts, theater, poetry readings, or speeches; a place to sit, converse, draw, meditate, or watch a soccer game; a place for leaping or sleeping. “Above all, this is to benefit the children,” she said. “It is your day, your theater. Use it. Enjoy it.”