“Action!”
That was the word of the day at Logan Elementary, where a professional film crew was on hand to produce promotional videos of the students’ upcoming performance of an anti-bullying play.
All 104 fourth and fifth graders at the school have played a part in the one-hour production of “Perfectly Different” to be performed May 14 in the Huron High School auditorium.
This school year, as a result of last year’s Listen and Learn Tour by Superintendent Jeanice Swift, Logan has added performing arts for fourth and fifth graders, with a focus on writing as the core content area.
Writing is not only a focus of the classroom curriculum, but also in the special area classes of art, physical education, music, and computers.
All fourth and fifth grade students read the book “Wonder” by R.J. Palacio, and wrote a script loosely based on it.

The play was scripted by Lana Faith Jaworski, a para-pro at Logan, and co-written by Logan fourth and fifth graders.

Principal Terra Webster said the students are excited to see the words they put on paper come to life.
“They see the power behind their words, and the effort behind their work is not just, `I’m writing this for a check plus, or a star or a letter grade, but I invested my time in writing a script about bullying, and now that is coming to life,’” she said.

The writing took place in their classrooms and special area classes, and the rehearsals and set designs will be worked on before and after school.

Lester Lewis, CEO of Paradigm 2000 Inc. in Detroit, said he realized the school could afford to pay very little for his company’s video production services that day, but he didn’t care.
He did it because he believes in the message.
“It’s important, and so are these kids,” he said. “They’re our future.”
In the video here, third grade teacher Tierra Jackson pretends to catch her students talking about a new boy in school who is physically deformed. Later in the performance, the children learn to see him as “perfectly different.” 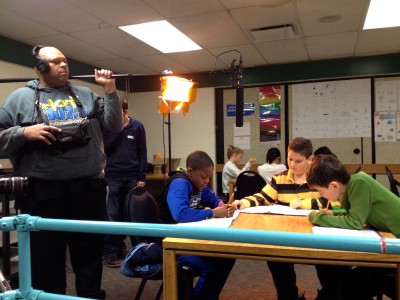 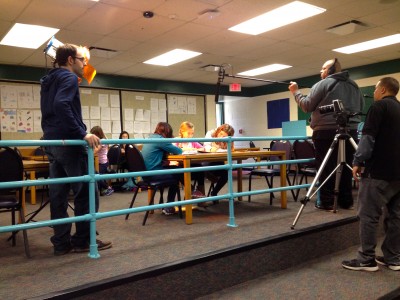