“It’s like a community-gets-together-and-makes-it-happen “Mr. Smith goes to Washington,”” says Baker, a mother of five who is in her third year as president. “It’s just so exciting that we made it happen.”

Though the trail has been in use since it was completed in June, the official ribbon-cutting will be Friday, Sept. 30 at 1 p.m. That will be followed at 1:30 by a 5K Run/Walk to “Block Out Cancer,” with all Clague students participating. 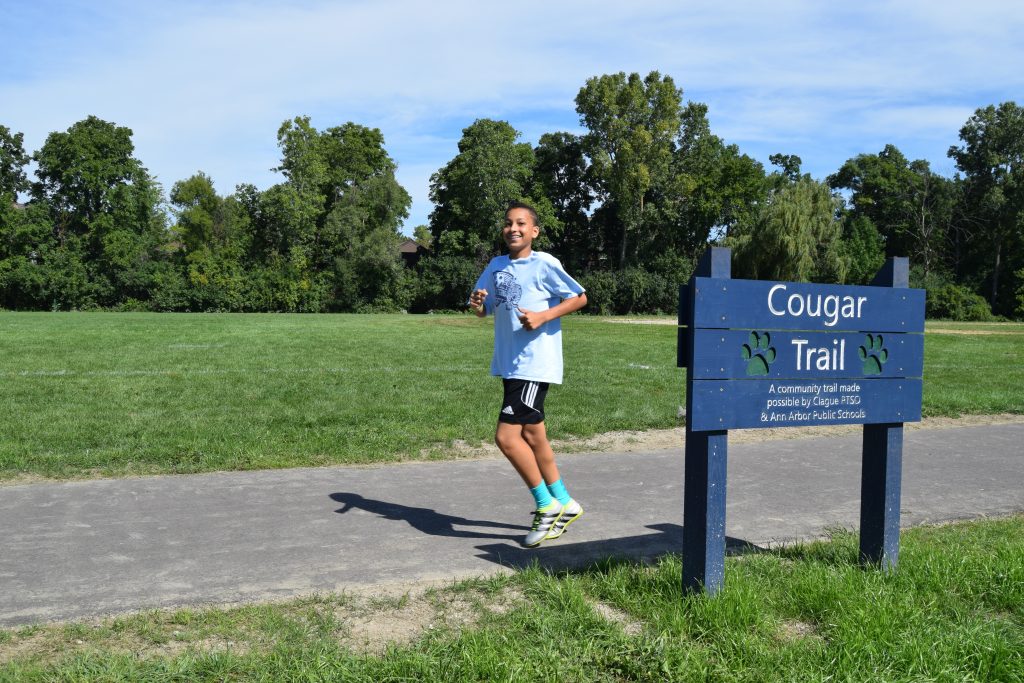 The project is the culmination of five years of cooperation between the Clague PTSO, AAPS and their contractors, local engineers and water resource experts, the Orchard Hills/Maplewood Homeowners Association, Clague neighbors, and Clague alum Drew Klinich, whose Eagle Scout Project was the Cougar Trail signage.

The idea began in 2011 when former PTSO President Jennifer Barber wanted to spend accumulated PTSO funds on something to benefit Clague and the neighborhood surrounding it.

By popular vote, the trail became the project  most people wanted to pursue.

“With the completion of the Cougar Trail, we have created a space for all of the current, former and new families to walk, run or jog,” he said.

Carter said that when he drives into the Clague parking lot on any day of the week, he sees people of all ages active on the trail.

“The northeast side of Ann Arbor is growing, Clague Middle School is thriving, and completion of the project is just one more indicator as to why Clague is a special place in our community,” he said. “The Cougar Trail represents the possibilities when we stay focused and persevere.  There is a genuine partnership between, parents, staff and students for without this none of this is possible.”

Baker said the five years between inception and completion of the trail included roadblocks involving water, engineering, and funding issues, all of which were eventually settled.

Cross country season recently started at Clague, and those runners have been using the trail for practice.

Kamie, a 12-year-old Clague student, said that she and her uncle sometimes run the trail after school. And Emma, a 12-year-old member of the girls’ cross country team, said running the trail is fun during practice.

“We know exactly how long it is, and I can send kids on one loop or two loops,” she said. “Yesterday we used the loop for warm-up and then used it at the end of our longer run. It’s wide enough for a group of 100 when they spread out—and we don’t get hit by field hockey balls and soccer balls.”

“There was a lot of support in the Clague community and from people who live nearby,” she said. “So we’re excited that it’s finally finished and that we can all use it.”