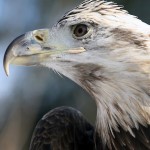 Bald Eagle facts
Number of feathers: 7,000.
Years to maturity: 5
Color: Feathers stay brown until maturity to alert others in the wild that bird is still developing.
Favorite meal: rodents, carrion. They capture prey with their feet.
Wing span: 6 feet.
Nests: About the size of a Volkswagen Beetle turned upside down.
Legal: The North American bald eagle is a federally protected species. No one is allowed to own or possess any part of these birds.
Fun fact: Called “slicing,” eagle pellets are expelled from the nest so that they don’t dirty it. (Raptor Educator Leanne Chadwick said most students find this particularly amusing.)
Source: Leslie Science and Nature Center.

When the eagle was selected as the Skyline High School school mascot, little did students and staff realize they would soon have a real-life North American bald eagle as a learning friend.

Leanne Chadwick, a raptor educator at the nonprofit Leslie Science and Nature Center (lesliesnc.org), has three children in the Ann Arbor district, including a daughter at Skyline and sons at Forsythe Middle School and Wines Elementary. Chadwick spotted an opportunity for both her daughter’s school and the nature center, which devotes its mission to working in the schools and with children who visit the center on Traver Road.

“Skyline is the only school in the area to have a living raptor partnership,” said Chadwick. The eagle came to the first home football game at Skyline and also has been part of classroom activities in leadership, physics, public policy and also came to a student assembly where several hundred students viewed her. She recently was part of Curriculum Night at Skyline, where 400 people, including incoming freshmen, were able to view and experience the bird live at the school.

Chadwick said some of the eagle’s lessons can apply to students. “For her survival in the wild, she has to be the best that she can be,” she explained. “She has to eat right, sleep right. We try to use the eagle as a mascot for (student) behavior.”

The partnership is paid for through fundraising donations specific to that program, Chadwick said, adding that since bald eagles can live for 50 years in captivity “hopefully, this relationship will be there for many years.”


“My goal is so that every population in Skyline can have access to her,” she continued. “We will do everything we can not to turn people away.”

She is one of 15 birds of prey that are kept at the Leslie Center via a partnership with the River Raisin center. They will live out their lives there, as birds who are injured and cannot be released back into the wild. Or, as in this eagle’s case, birds who bonded with humans as a newborn and cannot adjust to a life in the wild.

Like all raptors at the Leslie center, the bald eagle is not named because she is wild and not a pet, said Raptor Specialist Francie Krawcke. This bald eagle was found in Wisconsin where she had been kicked out of the nest, possibly by a sibling. She had a broken leg and wing and has some tendon issues with her wings. Because she was found young, she “imprinted” herself as a human so relates well to her handlers and the students and is ideally suited to be taken into classrooms, the handlers said.

Krawcke spends much of her time taking the eagle to local schools, for which the center normally charges a $200 fee. On this day, the bird was visiting both Lakewood Elementary School and Skyline for a photo shoot. “We come to other schools, all grades, even some university classes,” Krawcke said. She noted that Chadwick is close to also being able to handle the eagle herself, so more opportunities will open for the eagle to visit schools around southeast Michigan.

Chadwick’s childhood led her to an interest in raptors. She grew up in Kansas and Missouri where her parents would take the family out to scout for bald eagles. She worked at a raptor center in Colorado before moving around the globe with her family and eventually coming to Michigan to live in Ann Arbor, where she said bald eagles can sometimes been seen around the Huron River. “I’m particularly partial to eagles,” she added.

And, since the Leslie Center’s bald eagle is only three years old now, she is growing up with the current crop of Skyline students, an added plus for the partnership. “It’s a new school. When the first class graduates (including Chadwick’s daughter),” she said. “she’ll be a mature bird, just like them.”

If you go
The Leslie Science and Nature Center is a nonprofit that sits on 50 acres of land that includes the Black Pond Woods. The Leslie property was originally owned by Eugene and Emily Leslie, who left the land in trust to the city of Ann Arbor. Several years ago, the center became its own nonprofit entity. The grounds are open from dawn to dusk daily, with some staffed hours on weekends. Admission is free. Group educational programs both on and off site are offered for a fee.
Where: 1831 Traver Road
Phone: 734-997-1553.
E-mail: info@lesliesnc.org
Web: www.lesliesnc.org

WITH VIDEO: Clague Middle School event involves 60 students in a multi-media production, Bryant Early Elementary School sings about peace and Dicken Elementary students learn about jazz music and history with an assembly by Vincent York & Jazzistry. Many other schools around the district host MLK Day activities. […]

The Skyline High School cafeteria was abuzz with student talent and creativity during the seventh annual “NAAPID at Night” event last week. […]