A team of 35 Forsythe Middle School sixth-, seventh-, and eighth-graders placed second out of 10 teams in Michigan in the Knowledge Master Open on Dec. 2.  On the national level, Forsythe scored in the top 5 percent of all teams, ranking 28th out of 577 middle school teams nationwide.

The KMO is a nationwide knowledge contest that tests students’ ability to answer questions in all the subject areas, quickly and accurately. Students compete in the KMO without leaving their own schools; teams receive curriculum-based contest questions on a CD-ROM and compete using a computer at their own schools. The KMO began in 1983 with 72 schools; it now annually attracts over 3,000 schools and 45,000 participants from the U.S. and several foreign countries.

The KMO is a Forsythe student club open to Forsythe students of all grades. Teacher Dan Ezekiel coaches it. There are three more KMO competition dates in 2010. Details: www.greatauk.com.

Kristi Bishop, a music teacher at Bach Elementary, is traveling this month with the organization People to People as a music education delegate and Citizen Ambassador. to mainland China. Her trip runs from Dec. 11-21, which she will spend with 50 other music educators from around the United States.

During her trip, she will be part of round-table discussions, panels, seminars and site visits allowing her to gain an in-depth understanding of the common interests and challenges she shares with those overseas.

She also will have a chance to experience the culture and history of China including visits to locations such as the China Conservatory, Beijing No. 35 High School and spending the afternoon with the Yanan High School Chorus. 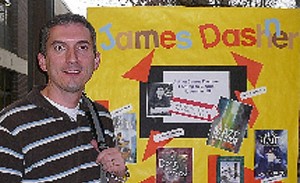 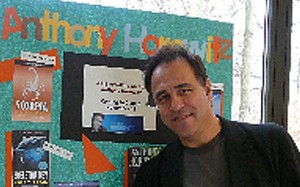 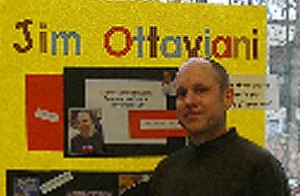 • On Nov. 18, author James Dashner treated our students to an imaginative visual presentation about writing that kept us laughing.
His latest book, “The Maze Runner,” has been selected as one of the best young adult books of 2009 by Kirkus Reviews.

• On Friday, local University of Michigan librarian and comic writer Jim Ottaviani inspired the entire eighth-grade with his presentation on scientific graphic novels and comics.
His books include “Dignifying Science” and “Two-Fisted Science.”
Students researched scientists and are now incorporating their research into a  graphic novel of their own. 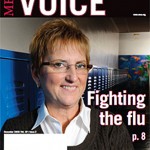 Ann Arbor Public Schools nurse Laurelle Brennan is featured both on the cover and in an article about the H1N1 flu in the December edition of the MEA Voice, the Michigan Education Association’s magazine. Link here to the magazine. Brennan is coordinating all H1N1 activities for The Ann Arbor Public Schools, monitoring attendance and coordinating the district’s efforts with the Washtenaw County Department of Public Health.

Krista McKinney-King, a counselor at Skyline High School, was honored in November for receiving her National Board Certification. She was honored during the Educator Recognition Reception in Lansing with the Michigan State Board of Education.

Clague Middle School eighth-grader León Pescador received the Middle School Student of the Year Award from the Michigan Council for the Social Studies. He received his award Nov. 2 at the Council’s annual state conference on Nov. 2. His school will receive $250 from MEEMIC Insurance, which sponsored the awards.

Nikko Ceoux was elected president and and Richard Johnson III vice president of the Roberto Clemente Student Council. The candidates campaigned as well as debated and answered questions regarding their platform at a school-wide assembly.

The staff and student body participated in a simulated voting process; voters were required to register and show proof of identity at the polls.

Logan Elementary School recently had its annual school coin drive to benefit United Way and Food Gathers. With support from Logan students, staff, families and other employees, the school presented a check for more than $1,539.97 to Superintendent Todd Roberts as proceeds from the event.

Also, Clemente students have broken the barrier in attendance records by having less than 600 absences for the trimester.
For their accomplishments, students have earned an “out” of appropriate dress attire day on Fridays for the new trimester and had a staff vs. student basketball game on Nov. 24.

The Dicken Elementary School Service Squad had a busy fall, including a great turnout for a blood drive and the start of a Thank a Soldier initiative, according to first-grade teacher Laura Carino.

Some 31 donors gave blood during an Oct. 28 American Red Cross Blood Drive and students that helped recruit one of the donors received a small prize from the Red Cross. Of the donors, the Red Cross was able to collect 20 units of blood, allowing the group to help save 60 lives.

In discussing what they were thankful for around Thanksgiving, Service Squad members decided upon a Thank a Soldier Initiative. Members organized a station at the Thanksgiving potluck allowing students to make a “thank you” card for a soldier. The cards were compiled and made ready to be mailed.

Students from Huron help at museum

In what has become an annual tradition, students who study German at Huron High School help the city of Ann Arbor decorate the city’s Kempf House Museum, according to language teacher Andrew Smith. Museum officials said they reached out to area German teachers in an effort to bring more youth to the historic site and introduce German language learners to the culture.
In the mid-1800s, Ann Arbor was shaped by the many German immigrants who energized the area, built homes and starated businesses. The Kempf House, a reminder of that era, is open to the public. It is at 312 S. Division St. Details 734-274-0528.

A total of 109 students from Bryant/Pattengill elementary schools community attended the school’s annual Math Night on Dec. 2 with their parents and siblings. Each student received a Math Game kit so they could play the games at home.

• The Dicken Elementary School Student Council, chaired by classroom teachers Jennifer Brogno and Cathy Cieglo, sponsored its annual food drive for Food Gatherers of Ann Arbor from Nov.16-23. The community donated canned foods, dried goods, diapers, formula, and other much needed items. A total of 747 pounds of food and other items were donated.
• Haisley Elementary School fifth-graders, in partnership with their PTO, organized a Fall Canned Food Drive collecting 841 pounds of food and personal hygiene items for Food Gatherers.

Athletic teams and booster groups from Pioneer and Huron high schools chose a “pink” theme for their football rivalry week this year. Sporting T-shirts with “Rivals on the Field, United for a Cure,” students raised more than $700 for breast cancer research. […]

Eight students were certified as the district’s first Teen Certified Emergency Response Team, or CERT, during a March 8 event at Huron High School. […]