If you peeked into Don Packard’s freshman English class a couple of weeks ago, you would have seen a room abuzz with students playing with Legos.

If you looked closer, you would have noticed many of them holding iPads, taking pictures, or closely studying their paperback copies of Romeo and Juliet.

The Pioneer class was tasked with a Lego-mation version of Romeo and Juliet’s drama. The project engrossed students in the traditional Shakespeare text and in non-traditional technologies.

Students used iPads, MacBooks or even their own iPods to take the photos, create an audio track, and mesh the two together. They had to rely on a deep understanding of the text – and healthy imaginations.

“It’s sort of tricky because they don’t really make Lego people with sad expressions,” said Kara Monchamp, who was tasked with reenacting the final scene. Lego Friar Lawrence, who just discovered a dead Romeo, had his hands in the air.

Students had the option of recording the script in the traditional language or in modern English. Given the severity of the final scene, Kara opted for the original verse. 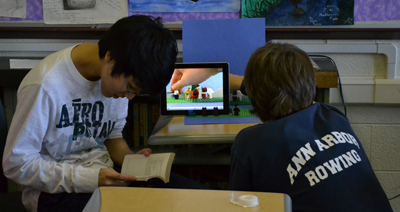 “Their responsibility is make the characters still come through as intended,” Packard said. Packard planned to have a class viewing of all the scenes in order. Each group will present their Lego-mation piece and explain their creative process.

“You see kids working in different ways,” he said. “Some are really good at the technology, and some are still learning.”

Packard brought in some Legos, and the students helped out by bringing their own from home. Backdrops were made of Lego blocks, construction paper or cardboard boxes. The MacBooks were from the school’s laptop cart, and the iPads came from a grant given to Packard by the Class of 1962.

The Lego-mation project tops off a Romeo and Juliet unit in which students read the play, watched film adaptations and had plenty of class discussion.

The students seemed pleased to have a creative outlet for their intimate understanding of the play. One pair made a despondent Lego Romeo exit the scene on a zip line. Another group worked on translating Shakespeare’s script to modern-day English. Yet another group tried to show Juliet pleading–although Legos can’t kneel– not to be forced to marry Paris.

“Learning is different now than it was 20, 30 years ago,” Packard said. “The technology now is more intuitive for (these students), so they can focus more on the interpretation.”

By Tara Cavanaugh One step into the Google office in downtown Ann Arbor, and you can tell that this isn’t your typical company. A well-stocked kitchen with on-demand chefs can whip up nearly any meal […]

By Tara Cavanaugh  The first Ann Arbor Public Schools Teacher Fair was packed Thursday night –– and it was only half as full as it could have been. More than 300 teachers filled a gym […]

Nine Ann Arbor Public Schools elementaries will have new principals due to retirements and shifts in personnel and two middle schools will get new assistant principals for the 2011-12 school year. All of the new appointments are internal in the district. […]