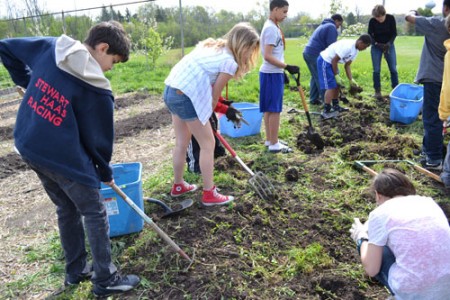 You can learn a lot by playing in the dirt.

You can learn about starting seeds, pulling weeds, the life cycle and the compost pile. Now that spring is in full swing, Tappan Middle School students are learning all that and more at the Tappan Garden.

Tappan has had a garden for ten years now, said Lynda Norton, a parent volunteer. Students tend to the garden, coming with their science classes or opting to help out during their advisory period. Earlier this year, students picked what they wanted to grow.

Last Friday, Susan Baker’s seventh grade life science class visited the garden. The students started broccoli seeds in the greenhouse, pulled weeds from a planned asparagus bed, and planted seeds that were ready to start life in the earth. 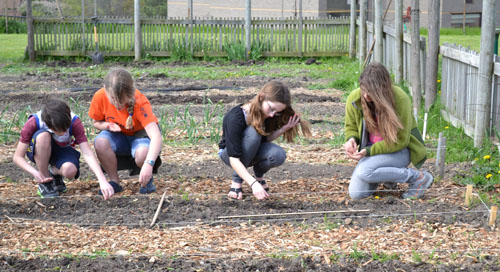 Baker says tending to the garden reinforces this year’s lessons in nutrition, ecology and the life cycle.

“A lot of the kids who might not get as engaged in the classroom get really engaged when we’re coming out here,” she said as the students focused excitedly on their tasks. “They learn about how they can grow their own foods. We talk a little bit about the economics, and why you would want to grow your own food locally. It’s more nutritious, fewer pesticides, something we can all do.”

They also learn new lessons in the garden. As a group of seventh graders hoed the dirt in the asparagus beds, parent and volunteer Kathy Sample explained–much to the students’ delight– just why the vegetable has the effect of turning urine green. She also talked about the history of the weed they were attacking. Called “Creeping Charlie,” it has bright green leaves and small purple flowers.

“It was brought over from England to make tea. It’s everywhere now,” Sample said as a boy nearly fell over while attempting to work a shovel into the ground. “When it’s got the purple flowers, it’s most vulnerable–that’s when we like to get rid of it. That’s the beginning of the season.”

As of the end of Friday, 1,680 seedlings had been planted, Norton said.

This summer the parents will ask families to adopt the garden for a week at a time. “They would water and weed,” Norton said. “If there’s produce ready, they could take that home as well.” Excess produce is donated to Back Door Food Pantry.

Agrarian Adventure provided most of the funding to build the garden, Norton said. The Tappan PTSO provides money for the operational costs, such as seeds and compost.

Tappan isn’t the only Ann Arbor Public Schools building with a garden of its own, she added. Northside, Burns Park, King, Lawton and Bryant elementary schools have their own too. Pittsfield and Haisley elementary schools will start new gardens this spring.

Check out the slideshow below for more photos from the Tappan Garden.

Burns Park Elementary recognized as a hub for the arts

The University Musical Society is singing the praises of Burns Park Elementary School, which was recently selected as the UMS School of the Year for its rich history in fine arts and music. […]

It’s that time of the year again: time for Orchestra Night, which showcases the talent of more than 800 students in the middle school and high school orchestras at the University of Michigan Hill Auditorium.