Before Michigan Supreme Court Justice Richard Bernstein spoke at Monday’s Assistive Technology Fall Expo, he said that more than anything, he wanted to make a connection.

And he hoped the questions posed by five AAPS student panelists would be as personal as possible.

“Especially with students with disabilities,” said Bernstein, who has been blind since birth, “the more personal we make it, the stronger our connectivity is going to be.”

It was soon obvious that he connected with all of the students, and especially Huron High School sophomore Austin Shepherd, who is severely visually impaired, interested in becoming a lawyer (among other things), and exceptionally articulate.

Like Bernstein, Austin enjoys volunteering his time, and advocates for people with disabilities.

Another thing the two have in common: They’re not going to let anything stop them.

Bernstein, who is the country’s first blind Supreme Court justice, said that when all is said and done, life experience is what matters.

“Our district is very accommodating”

Throughout Bernstein’s casual conversation with students before the panel, and then during the hour the six were on the stage before an audience, Austin could be seen smiling and nodding in agreement.

Austin, 15, who plays the vibraphone in the Community High School Jazz Band, has attended AAPS since preschool, and attended Angell Elementary and Tappan Middle School, where he played the lead role in the Tappan Players’ production of “Oliver.”

“In my every day life, I don’t think about it as much,” Austin says of his disability.

At Huron, a case manager makes sure Austin’s IEP is met, and a paraprofessional helps him out when he needs it.

While Justice Bernstein has been totally blind since birth, Austin sees peripherally rather than in a straight line, in what some call “doughnut vision.” He uses a white cane, but usually only in unfamiliar places.

Austin can read both Braille and print, as long as the type is at least 28 points.

Austin does most of his written work on his laptop, which has magnification software. He often receives instruction from a vision teacher and an orientation and mobility specialist.

“Over the years, as long as I’ve had an IEP, we’ve been working really hard to make sure that I do get the services we need, and I think we’ve been very successful with that, and I think that’s going to continue into college,” says Austin. “Ann Arbor’s a great place to get an education. Despite the fact that I do have a disability, our district is very accommodating.”

Justice Bernstein: “It gets better”

Bernstein said he credits a high school guidance counselor for encouraging him to go on to the University of Michigan, and says he felt lonely and awkward and out-of-place in middle and high school.

“I really wish someone had told me what I’ll tell you: Life gets so much better once you graduate,” Bernstein told the crowd. “Nobody shared that with me. And I thought that the way I was in high school was the way I was going to be for my entire life. I thought wherever I fit in on the social hierarchy was where I was going to land in the future.

He said he wasted far too much time worrying about fitting in, but had instead said to himself: “I’m going to be who I am. I’m going to roll through this.”

Bernstein said he didn’t get a single call-back from any of the 65 law firms he interviewed with at the end of law school, which points to the continuing struggle those with disabilities face despite so much progress in other areas.

Employers should realize that employees with challenges are often among the most loyal, passionate, energetic and focused workers if they are given a chance, he said.

“We don’t take anything for granted,” said Bernstein. 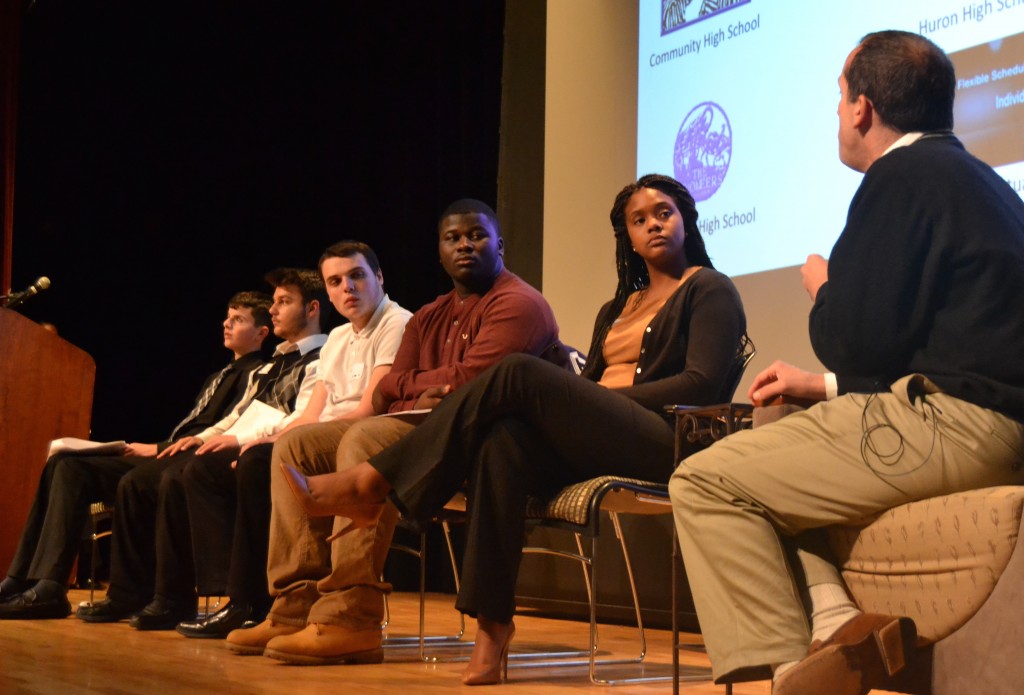 Bernstein reminded parents of children with disabilities that they should consider themselves amateur athletes training for a marathon, and take it one day at a time.

He urged them to celebrate the snalll victories and achievements.

At the close of the event, Austin said he was impressed by Bernstein’s message.

“And I’ve talked to other panelists, too, and everybody’s been saying the same thing,” he said. “This gentleman right here empowers people; that’s what he’s good at. And I just wish more people would realize how good it feels to listen to someone who’s so empowering and inspiring. I felt empowered, and I think we’re all moved.”

Austin said he loved what he said about winning the small victories, and called Bernstein “a gentleman with a really good heart.”

Austin says his educational experience at AAPS has been positive.

“I feel pretty safe at school, and with the other kids,” he says.

Still, he says it’s hard to watch his friends learning how to drive, and knowing that’s something he won’t be able to do.

Austin knows he has lots of time to decide on what to do for a living, and sports journalist and lawyer are two considerations.

“There are things I do to adapt to life with a disability,” says Austin. “There are some things that are very hard for me to do. But it doesn’t keep me from doing the things I want to do in life; make my dreams come true.”

As she did last May at the spring expo, AAPS school psychologist Jennifer Joseph took her four-year-old daughter, Khara, to meet Bernstein. Khara, an AAPS preschooler, is also blind. 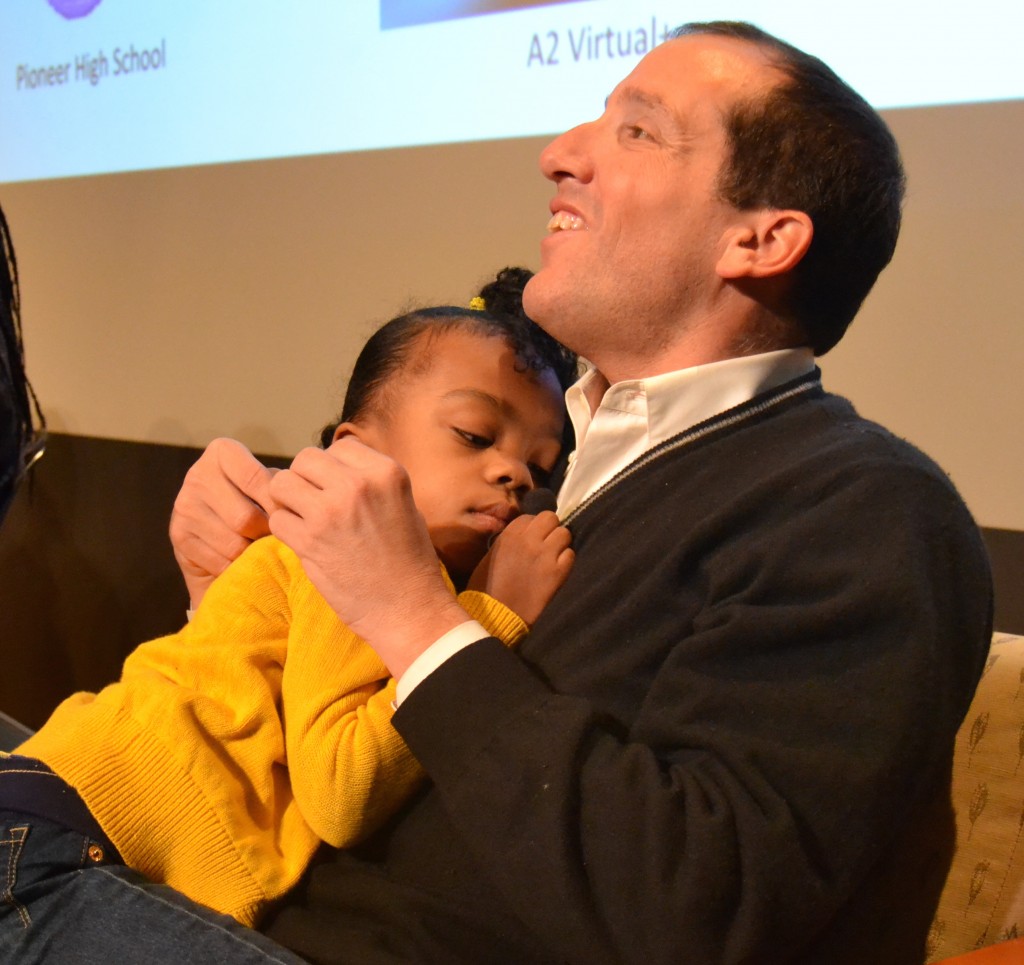 This time, Khara chatted a bit with Bernstein before deciding she’d prefer to simply curl up in the justice’s lap.

“She is just so amazing!” Bernstein said

with a big smile, as Khara snuggled close.

Later, Joseph would use the same word to describe Bernstein, and his encouraging words to the students, and their families.

She said she especially liked one thing he said: “We don’t suffer,” she said, quoting Bernstein. “We struggle.”