It wasn’t even close.

When it was time to pick the king of the Pioneer High School Homecoming Dance 2016, the students overwhelmingly chose Donald Armstrong.

The fact that he has Down Syndrome? Yeah. So?

“Students can be so awesome,” said PHS Assistant Principal Jason Skiba. “This is authentic. It isn’t fake. Students campaigned for Donald all over the school. They were super excited.”

In a Peer-to-peer Connection class, general education students are placed in self-contained classrooms every hour of the day, which means they mentor, model and get to know the students with special challenges. 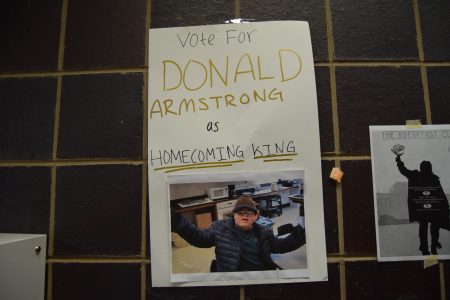 Several of the mentors began a campaign for Donald, which quickly took off.

When Donald was announced king at a pep assembly this morning, there was an eruption of cheers in the gym as students ran up to congratulate him. Donald’s mother and grandmother were also in the crowd for the memorable moment.

“It really was an awesome thing to watch,” said Skiba.

The fact that students were not voting for the 19-year-old senior out of pity is what makes it so authentic, Skiba said.

“It’s not like a bad sitcom or an after-school special,” he said. “Donald’s a pretty awesome kid with a great heart. And because of that —not in spite of that—that’s the reason students, especially some of the peers, really campaigned and promoted him.”

Donald’s vocabulary is limited, but you can tell he’s having a very good day as he walks down the hall wearing his crown and accepting high fives: