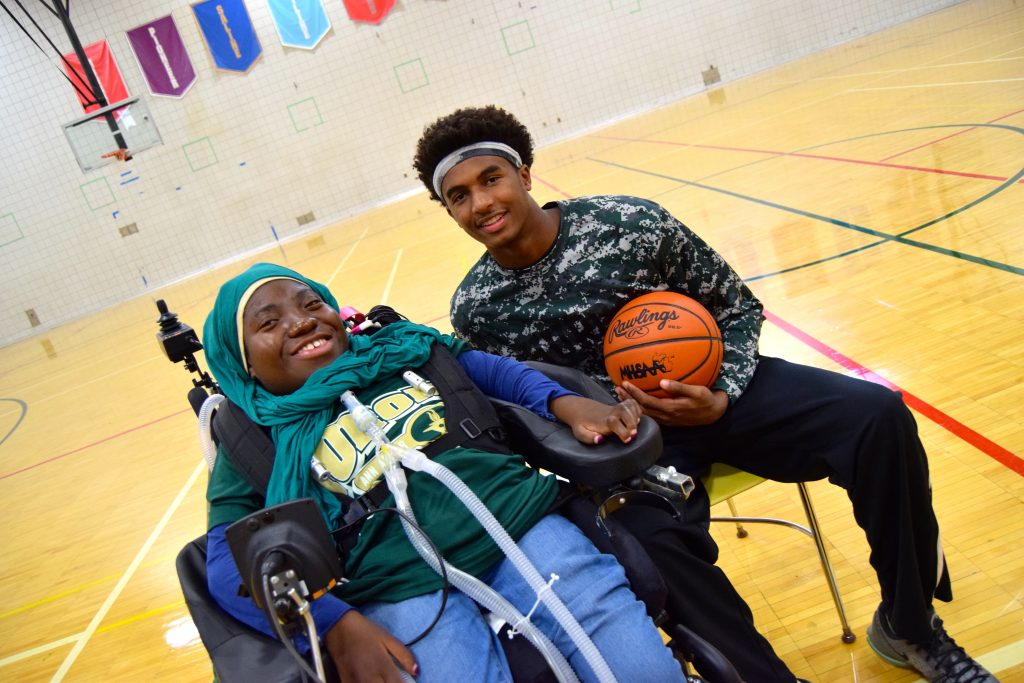 The date to the dance started last spring when Huron High School basketball player Lawrence Rowley took part in Project Unify, a partnership program between general education students and those with disabilities.

Lawrence was helping out in the gym which was set up with stations simulating various disabilities, when a pretty girl in a wheelchair approached him.

“Anna introduced herself to me, “ Lawrence recalls, “we talked a little bit about the station and how school’s going and things like that. And then she asked if I had a homecoming date for next year. When I said, ‘No,’ she asked if I’d like to take her and I said, ‘I’d love to.’”

“I didn’t have anybody to go to the homecoming with,” recalls Anna Parnell, “so I thought, maybe I’ll just ask him. He said yes! He’s very nice and he’s very cool.”

Since then, Anna has had her heart set on attending the dance Oct. 15. There was, however, one possible glitch: Lawrence didn’t have a girlfriend at the time he accepted. Now he does. Thankfully, his girlfriend encouraged him to keep his commitment, especially since they were able to attend the homecoming dance at her school.

And so Lawrence and Anna are each looking forward to Huron’s homecoming dance Saturday night.

Anna, also a senior, has been unable to use her legs or arms following a car accident when she was a year and a half. Still, she loves to dance, moving her chair to the music or simply bopping her head to the beat.

“I would love to have a real boyfriend, but that hasn’t happened yet,” said Anna, who last year went to homecoming with her teacher’s aide’s son, Desmond. “My sister says when the time comes … but I always tell her time will never come. Everyone in high school always has a boyfriend except me.”

Anna travels in a specially equipped van, so she’ll meet Lawrence at the dance, wearing one of her favorite African dresses she expects will match his bow tie.

She admits to having a bit of a crush on Lawrence, whom she had noticed even before she approached him last spring.

“His girlfriend is pretty nice to let me go with him,” says Anna, who hopes to be an actress one day. “I thought that was really cool. At first I was like, `You don’t really have to go with me if you have a girlfriend.’ He said, ‘She’s cool about it.’ I think it’s going to be a lot of fun.”

“I think it’ll be fun for both of us,” says Lawrence. “I think we’ll have a good time.”