The team performed well above its predicted finish, and smacked several national powerhouses with their play, says coach Ken Long.

About 1,500 players from 39 states competed in Columbus.

“They work hard to be strong players, support each other when a match does not go well, and display proper sportsmanship in victory and defeat,” says Long, who is also Huron’s social studies department chair. “To be good, the students practice nearly every day, study puzzles and printed materials, and participate in competitions as often as their busy schedules allow.”

Huron senior Jeffery Zhang is president of the chess club and has been playing the game since elementary school. In fact, for the past two years, he and fellow chess club members Franklin Bromberg, Taimor Williams, Justin Chen, and Yuyi Li have been volunteer chess teachers at Mitchell Elementary.

Chess has taught him valuable life skills, he says.

“The greatest virtues of chess in my opinion include patience, deliberation, foresight, sacrifice, and perseverance,” he says. “A person needs all these skills, not just intelligence, to be a strong player. A final addition to the list would be good sportsmanship, and respect for one’s opponent. I am also thankful because the game of chess has led me to meet and become friends with a great deal of people.”

The Chess Club holds open meetings every lunch period, and between 25 to 35 students show up on any given day.  Twelve students make up the Huron Chess Team to participate in state and national tournaments, while another 50 or so participate at either matches against other schools, our in-school tournaments, or just play casually at lunch.

The team has won Michigan’s High School Chess Tournament for three years in a row now, and a total of five times in the last nine years. 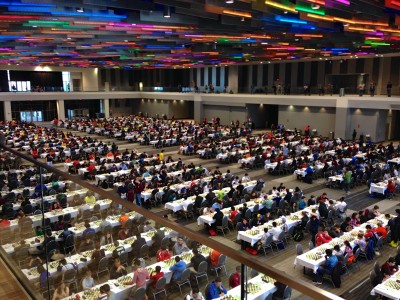 About 1,500 students competed in the National High School Chess Tournament.