It’s a sunny fall day at the Fox Preserve gravel pit, and the second graders are super excited about all the rocks they’re collecting in their plastic milk jugs.

“Mr. Szczygiel!” shouts a classmate. “Look what I found!”

“Mr. Szczygiel! Is this granite?”

For AAPS Environmental Education Consultant David Szczygiel (pronounced SEE-gul), this field trip is just one of the many hundreds he has led over the years.  Yet somehow his enthusiasm for a little bumpy rock in a seven-year-old’s hand seems genuine.

“I really am a big kid!” says Szczygiel. “I am just as excited teaching about natural curiosities today as I was when I first discovered them for myself as a child.”

As for all those questions coming his way day after day?

“I am constantly learning from friends, volunteer naturalists, teachers and students,” he says. “Every day I get questions about the world that I can’t fully answer. I like that challenge. It keeps me thinking all the time.”

For 55 years, the AAPS Environmental Education Program has educated K-6 students about the natural environment by taking them on field trips that enhance classroom curriculum.

Szczygiel has been at the helm for the last 20 of those 55 years, and says he has one of the best jobs in the district.

“Teaching about the environment, the out-of-doors and local natural curiosities never seems to get old for me,” he says.

In a technological age, environmental education is more important than ever, Szczygiel says, smiling at the thought of so many “ah hah” moments.

“I’m a teacher on special assignment for 20 years,” he says, sitting in the sunshine at Green Acres Farm in Scio Township, a frequent field trip setting. “I am so lucky to be able to teach in the purest way I have ever found, immersed in nature every day with a rich variety of beautiful places to visit with my classes, and a wealth of  help from dedicated community volunteer naturalists.”

A naturalist from way back

Szczygiel is an Ann Arbor native and Pioneer High School  graduate whose love of the outdoors goes back to the days he would sit for hours picking fossils out of a gravel driveway on his walk home from Wines Elementary.

“The people who lived there must have thought I was nuts,” he recalls. “I guess it paid off for me in the future.”

Szczygiel, who figures he’s the longest-standing member of the Ann Arbor Y, has had every job the Y offers, from teaching racquetball to bus driver.  After he caught the teaching bug,  he got his degree at  Eastern Michigan University and taught life science at Forsythe and Clague middle schools for 10 years. After earning his master’s degree in general science at EMU,  he became the EE consultant.

Since then, he figures he’s led 24,000 K-6 kids on field trips. He sees nearly 10,000 kids each year, and though he obviously can’t get to know them well as he once did as a classroom teacher, he doesn’t miss grading all those papers. And of course, he loves being outside.

He and his 94-year-old father share that love of nature.  Every Thursday, they watch “Wilderness Journal” and “Michigan Out of Doors” together. And when he tells his dad about his last hunting or fishing adventure, he can see the gleam in his eyes.

In fact, for seven years, he and his wife and the oldest two of their three children lived in one of the 600-square-foot cabins at the Y’s Camp Birkett, where he worked before he became an AAPS teacher.

It was so cold that on some days, the dog bowls of water would freeze. With no running water, he would shower at the Y before a shift.

He and his wife now live on a dirt road in an Ann Arbor subdivision that “looks like country,” he says. Szczygiel’s garage is a testimony to two interests—lapidary and scavaging— and is filled with rocks that he cuts into useful objects, and stuff that University of Michigan students throw out at the end of semesters that he gives away to those who need it. 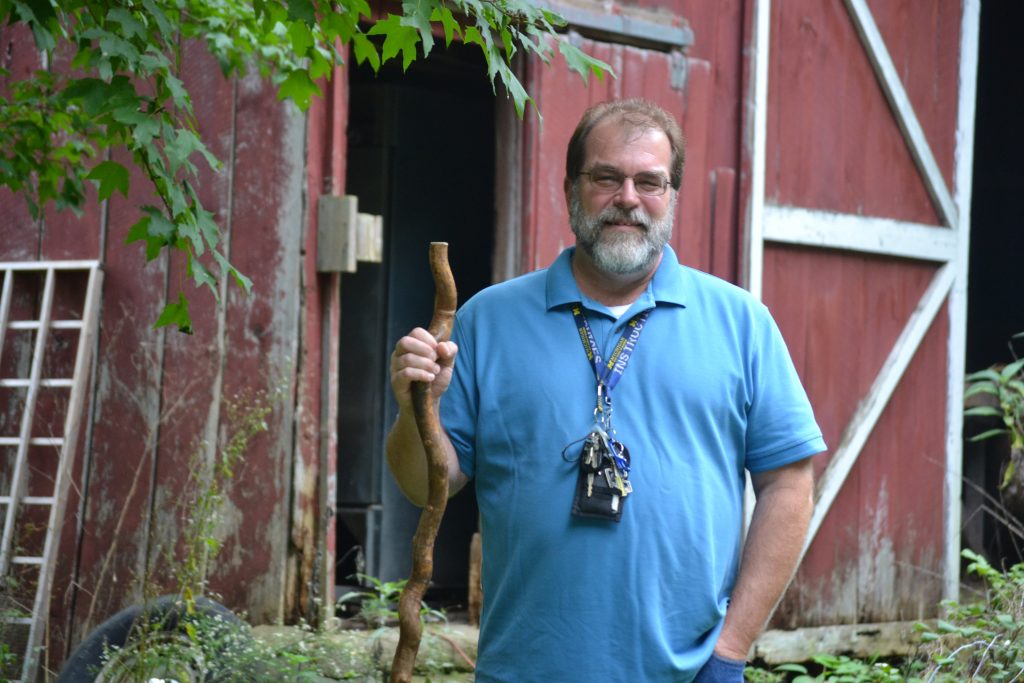 One of AAPS’ exceptional educators

Bryant Elementary teacher Michael Hagen calls Szczygiel “the best educator in the district.” Hagen says he was a kindergarten teacher when he first realized Szczygiel’s genius with kids.

Environmental Education is a year-round program

AAPS Environmental Education is a year-round program.   Kindergarten visits are conducted in December, while grades 1 and 5 go on winter trips conducted between December and March.  Spring trips include third grade pond trips, as well as the remainder of second, fourth, and sixth grade trips begun in the fall.  EE also includes 7th grade Climate and Forestry field trips when there are enough volunteers available.

The fall field trips going on now include:

AAPS EE depends on many community volunteers to exist

An important piece of the EEP is the amount of community effort it takes to make it happen, says Szczygiel. He says the district is lucky to have so many available resources to explore, as well as volunteer naturalists and people who donate their time, expertise, land access and money to help keep the EE program alive and well over the last 55 years.

“One of our naturalists has helped on field trips 2050 times, and he’s 82,” says Szczygiel. “People from the university come, parents, a variety of folks. They give their time in the field to teach the kids about the outdoors. And that’s a valuable program because everybody’s invested in it.”

He says some of the volunteers are AAPS graduates who enjoyed the same field trips years ago.

“So they know what they got out of going out on a walk with somebody knowledgeable, so it’s not just a walk in the woods,” he says. “You’re along with a naturalist, somebody who knows about nature and can teach you about what’s there. And that’s a valuable piece.”

District Webmaster John Stahly, who accompanied Szczygiel on field trips as a trip leader for 10 years, agrees that the program is especially important now.

“As young people spend less and less time in outdoor activity of any kind, their level of natural literacy really suffers,” he says. “Dave and the EE program provide a connection to nature for every student across the district that is an essential part of their education.”

In addition to the volunteer naturalists, Szczygiel is grateful to those who manage parks and properties for the state of Michigan, Washtenaw County, the city of Ann Arbor, surrounding townships, as well as to the private land owners who welcome the students.   He also credits his wife of 30 years, Thurston Elementary teacher consultant Margaret Szczygiel, for her support.

“She does all the work at home—raised the children, chops fire wood, grooms and cares for the dogs, paints the house, and puts up with all my projects, hobbies and natural curiosities,” he says.

Szczygiel says his job would not work out for those who mind being outside in all kinds of weather.

But he doesn’t mind the changing weather conditions. On the contrary.

“It’s just the flavor of the day,” he says. “My classroom is the outdoors.”