Pioneer High School Band Director David Leach says his job is not to turn students into professional musicians—although quite a few have done just that.

Rather, it’s after something more basic; something that every one can take with them no matter what direction they take.

“I want them to understand both the pursuit of excellence; the incredible feeling of giving over to arts,” he said. “But what more than anything else, I want them to live in the moment.”

It’s a concept many don’t grasp at first.

“Usually by the time they’re seniors, they say, `We get it,’” said Leach, sitting in his office off the band room. “many of them will write papers before graduation that says, `Mr. Leach said to live in the moment, and now that makes a difference.”

“You have to be able to say, `Look, I can learn from the past. And I can prepare for the future. But if I’m not living in this point in time, enjoying my friends, enjoying the work, enjoying this experience, then I’m doing a disservice to my own existence.”

Leach was treated to one especially fine moment recently when he opened an email and learned he was named one of School Band & Orchestra’s 17th annual “50 Directors Who Make a Difference.” The award honors outstanding music educators across the country who were nominated by students, parents, colleagues, and others.

Leach says he’s been lucky his entire career to teach kids from supportive families. To learn about this latest award was, he says, “an absolute blindside amazing moment.” And he’s had quite a few of those.

Leach says he had a “marvelous” experience as a student at Huron High School, which led to an “incredible” experience at Eastern Michigan University, which has led to a “series of amazing events” within his career.

“It’s because I like to try to live in the moment,” he said.

The Ann Arbor native focused on trumpet and voice all the way through Clague Middle School, Huron High School and Eastern Michigan University for both his bachelor’s and master’s degrees. At Huron, he had the lead in a musical Lil’ Abner and played trumpet in orchestra and band.

“They were powerful, intelligent, sensitive men who were big influences in my life, along with my trumpet teacher, Ben Duff, and so I gravitated towards them as strong role models,” he said. “Tom Milard, who retired a few years ago from Clague, is to this day a very important mentor to me.”

“Those men were indispensible in terms of allowing me to believe that music is masculine and music is amazing and can be spectacular if you pursue it with some form of integrity.”

Leach was director of bands at Ypsilanti High School from 1988 to 2002, when he took over for Pioneer High School’s retiring band director, Robert Albritton. Albritton, in fact, had been Leach’s first band director when he was a fifth grader at Northside Elementary.

Though he was happy and successful working in Ypsilanti, touring Europe with the students three times and performing at all the major conferences, Leach was also pleased to return to Ann Arbor schools.

Asked to name the most difficult part of teaching, he says it is never the kids, the administration, or the community.

“And it never has been,” said Leach, who was a quarterfinalist for the 2014 Grammy Music Educator Award. “I had a great experience in Ypilanti, too.”

The most difficult thing is what goes on in Lansing and Washington D.C., he said.

“They have continued to vilify public school education on both sides of the aisle,” he said. “What’s been transpiring from Washington D.C. is equally as punishing as what’s going on in Lansing. The Reach for the Top money or all these things with strings tied to standardized testing—and that’s federal—has painted public education and music particularly as villainous.”

He said a squeeze coming from federal and state graduation requirements also means students don’t have room in their schedules for 4 years of the arts.

“With all the changes in graduation requirements—with kids now being forced to take four years of math, which is detrimental to kids who aren’t mathematically-inclined—and multiple years of foreign language which are now pushing down to middle school and elementary school—kids are forced out of music,” he said; In most cases that they don’t want to. But they can’t take band or choir for four years or six years if they’re starting in middle school and get all their graduation requirements in, without making a financial sacrifice of taking summer school or taking sports outside of school that qualifies for credit.”

He’s not seeing fewer students. But many music departments are not attracting from a broad spectrum anymore, he said.

“We’re lucky enough in Ann Arbor that arts is still a big foundation for who we are,” he said. “As I look across the state, it’s abysmal, what’s happening to arts education … When you judge a society, do you judge it on its ability to make money, or on what it left? And right now, we’re not leaving very much artistically.”

Arts education is important because it allows the mind to be creative, he said, He said Diane Ravitch, author of “The Death and Life of the Great American School System, has stressed the importance of instrumental music in elementary school.

“That’s primarily because if you’re learning an instrument, you’re not just decoding a letter and putting it together,” said Leach. “You have fingers to put down, articulation, pitches. There are all these things we do, which allows the mind to be able to decode all forms of reading better. Thus, musicians happen to also be better readers.”

And unlike most sports teams, which are usually separated by gender, musicians, he said, form “one big cooperative collaborative coagulated group of folks that have a common interest.”

He just got a new recording of Claude Debussy’s Clair de Lune that he deemed “spectacular,” particularly on his Klipsch speakers.

Leach and his wife, Mary, live in the Dexter School District just outside Ann Arbor, but when it was time for their son and then daughter to go to high school, they knew they wanted them at Pioneer High School.

“We were adamant about them having the Ann Arbor experience—the openness, the acceptance,” he said, noting that he refers to their closest friends as “the rainbow of Ann Arbor” because they’re so diverse.

Leach, whose high energy level is immediately apparent, studies martial arts, and has switched from skiing to snowboarding, which is kinder to his knees.

“I have an amazing wife who is incredibly patient and guaranteed a spot in heaven because she puts up with my schedule,” he said, referring to Mary, a kindergarten teacher in Dexter.

Their son Tyler is a sophomore at Washtenaw Community College. Daughter Marisa is a junior at Pioneer, and is in symphony band and orchestra. Tyler was in symphony and jazz band when he was in Pioneer, and got to travel to China. Marisa has traveled to Europe with the band.

Leach, obviously, thinks band kids are pretty much it. And so he was outraged on Jan. 1 when CBS sports commentator Jim Rome tweeted :“Is there anybody not in a marching band who thinks those dorks running around with their instruments are cool?”

Leach called that tweet a case of blatant bullying.

“To say that when he has no clue about how much those kids sacrifice to be part of that amazing experience at the Rose Bowl,” he said. “Can anybody in collegiate football imagine a Saturday without a marching band on the football field? Nobody can, especially in this town. “

“So I’m a proud dork. And I think most of my kids are, because we serve so much more. It goes well above and beyond that, and most professional musicians do it until they’re 80. Most professional athletes are out before they’re 30.”

High school band is a family, a safe haven, a home, he said.

“Band, choir and orchestra are four years together. That’s four years of band camp, four years of traveling every year. That’s such a tight bond. It’s more than just a class for one semester.”

“Whenever he’s conducting, he’ll be very into it, and you can tell just be looking at him, and that inspires you to do it yourself,” she said.

Kumer said students know that he cares about them, and their lives.

“You can always talk to him about anything,” she said, “whether it’s band or not band.”

Leach said that he never compares one group of students to another, which goes back to his philosophy of living in the moment. 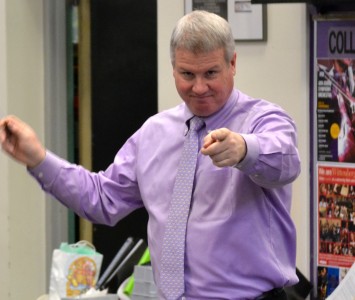 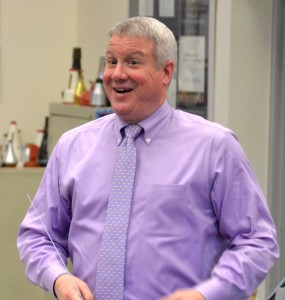 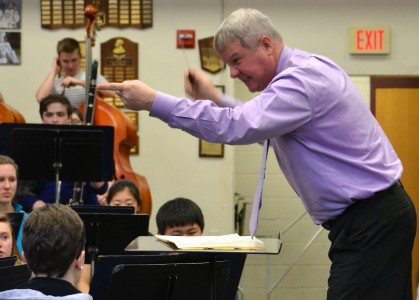 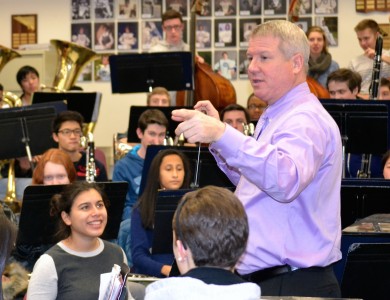 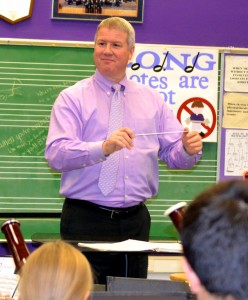