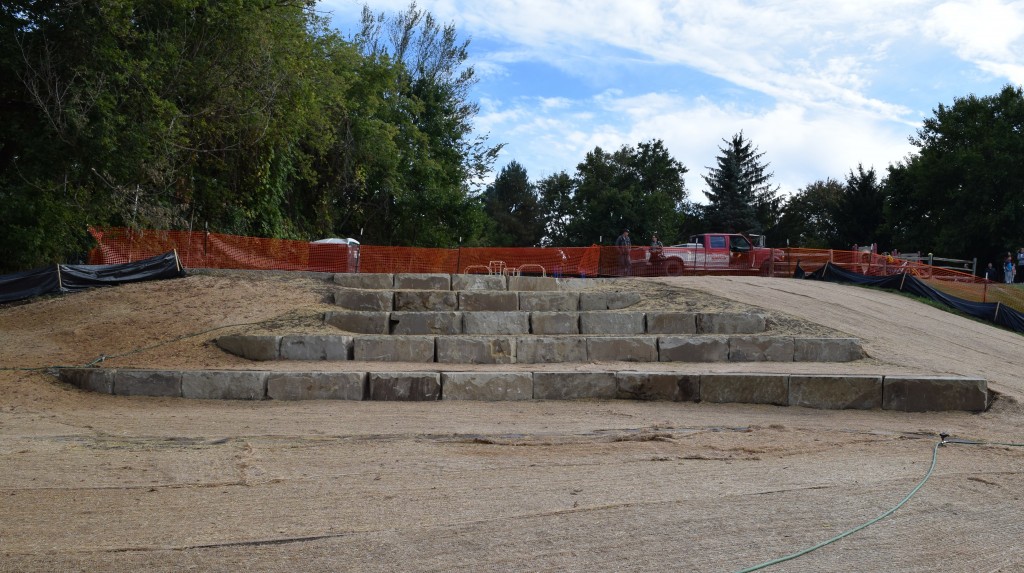 Later this month a new outdoor performance space will open on the big playground across from Bach Elementary. Stephen’s Theater is a tribute to Stephen Easter who members of the Bach community say had a big personality, loved to perform, and was the type of kid people remember. Easter died in 2013 in the summer after he completed second grade, but will be remembered for years to come thanks to the efforts of Bach students, parents, staff, and the entire community.

Bach 5th grader Patrick thinks his friend Stephen would like the theater project built into the hill overlooking Bach’s soccer fields. “He loved being outside and he loved arts and music,” Patrick says.

Bach parent and landscape architect Shannan Gibb-Randall based her design on input from Stephen’s classmates. The theater includes five rows of stone seating in honor of Stephen being born on May 5, 2005 or 5/5/5. The performance spaces at the top and bottom of the theater are shaped in a “S” for Stephen. Having performance spaces at both the top and bottom of the hill were crucial in the project getting approval by state officials concerned about barrier free access.

Stephen’s classmates at Bach were also instrumental in raising over $40,000 for the theater project. Bach 5th grader Owen says it feels good knowing he helped pay for the theater to remember his friend. “Every University of Michigan football game we had lemonade stands and made over $500,” Owen says. Bach students also sold hot chocolate, handmade bracelets and necklaces. Students also donated money from allowances, doing various chores and asked for theater donations as presents. The project also received a $10,000 donation from the Buhr foundation.

As the school board formally approved the construction bid to Michigan Hardscape they also thanked the students and community for the effort. “I think this is a lovely gift from the families to our school district, it’s just so nice, we have such a great community,” says School Board member Susan Baskett.

The timing of the completion of the project was also important to the School Board and the Bach Community. School Board member Christine Stead says, “It’s just wonderful to have this fifth grade class, this is Stephen’s class and it’s their last year at Bach Elementary, and so it’s a really important project to have up and ready for them.”

A ribbon cutting ceremony and the inaugural performance at the amphitheater is planned for October 22nd starting at 5:30.