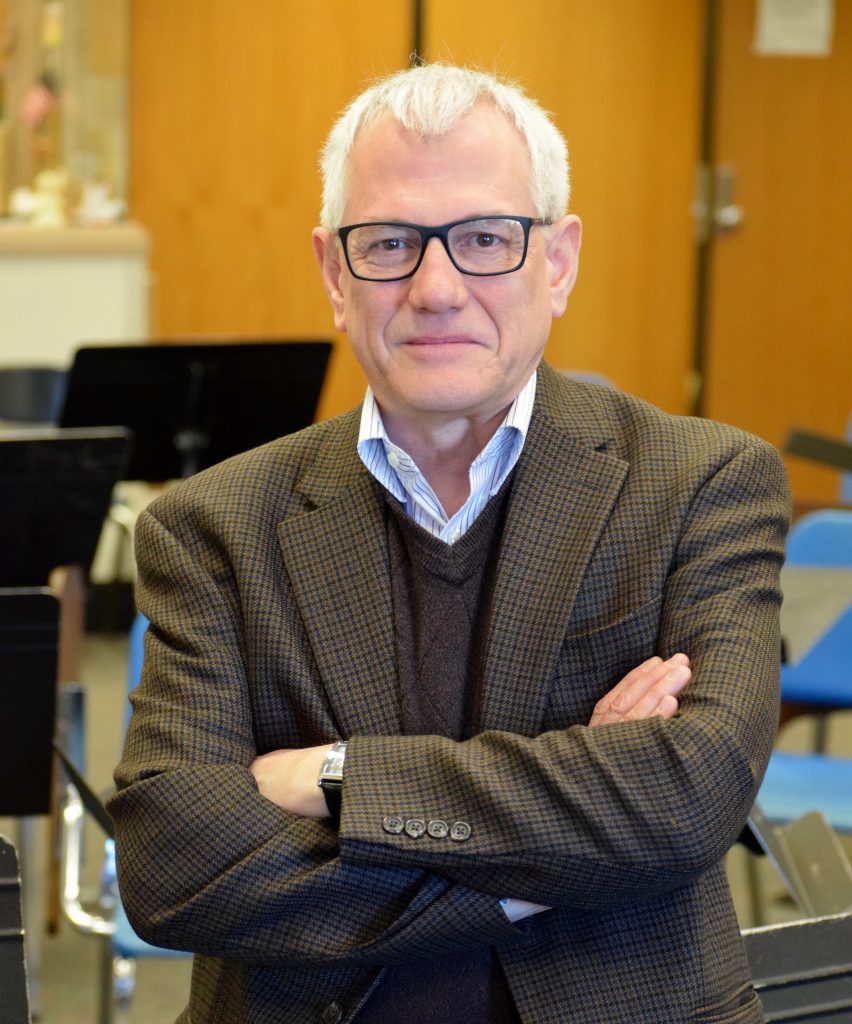 Luckily for Tappan Middle School music students, Joe DeMarsh broke the vow he took 35 years ago that went something like this: “I will never ever teach again.”

DeMarsh’s first teaching job was in a tiny district up north in 1981. Not only was he the sole music teacher in the entire district, he was the fifth music teacher hired in five years.

“I’d sent out 45 letters and only got one interview and they offered me the job, so I figured I better take it,” said DeMarsh, recalling that awful year teaching high school band, junior high band, sixth grade band and general music grades 1-6.

After he turned in his notice, DeMarsh began a seven-year adventure that took many directions before leading back to the classroom.

Deciding to switch from music education to performance—which had been his original plan leaving Seaholm High School in Birmingham—DeMarsh returned to the University of Michigan as a graduate student in tuba performance.

Then came five busy years performing in three brass quintets as well as the Flint, Warren and Lansing symphonies, while holding down one part-time job after another, including newspaper deliverer, custodian, courier, taxi driver, and U-M projectionist.

Eventually, he realized that Ann Arbor was a community that supported the arts, and that maybe teaching here wouldn’t be so bad. It was a hunch confirmed when he started subbing. With a wife and baby on the way, DeMarsh needed a steady income, and was relieved when part-time teaching jobs slowly but finally led to a full-time job as the Tappan Orchestra Director in 1990.

In June, DeMarsh will retire as the school’s acclaimed orchestra director who has time after time led his students to honors for musical excellence.

His departure is a loss for the students entering Tappan next year, says eighth grader cellist Natalie Chapel, who has studied under DeMarsh for three years.

“He’s a great teacher,” says Natalie, noting that he was a huge help to her performance in orchestra. “He is so kind and amazing.”

DeMarsh, who has a strong preference for teaching orchestra over band because of the type of music performed as well as the simplicity of teaching strings versus a larger array of instruments, also teaches 6th grade Exploratory Music and 8th grade Music Technology, which is composition using Garage Band.

Eastern Michigan University student Vanessa Kestner, who is DeMarsh’s student teacher this semester, says DeMarsh is clearly there for the kids.

“Joe would do anything for them, and he does,” she says. “He spends hours outside school preparing for class. And when he’s here, he does everything he possibly can. He gives everything he has to this.”

“The students love him. The younger ones especially are going to miss him terribly when he leaves. You can even tell now, they ask him: ‘Why are you leaving? Who’s going to replace you? What are they going to be like?’ They’re really nervous about that, and that’s a testament to how much of an impression he’s had on them.” 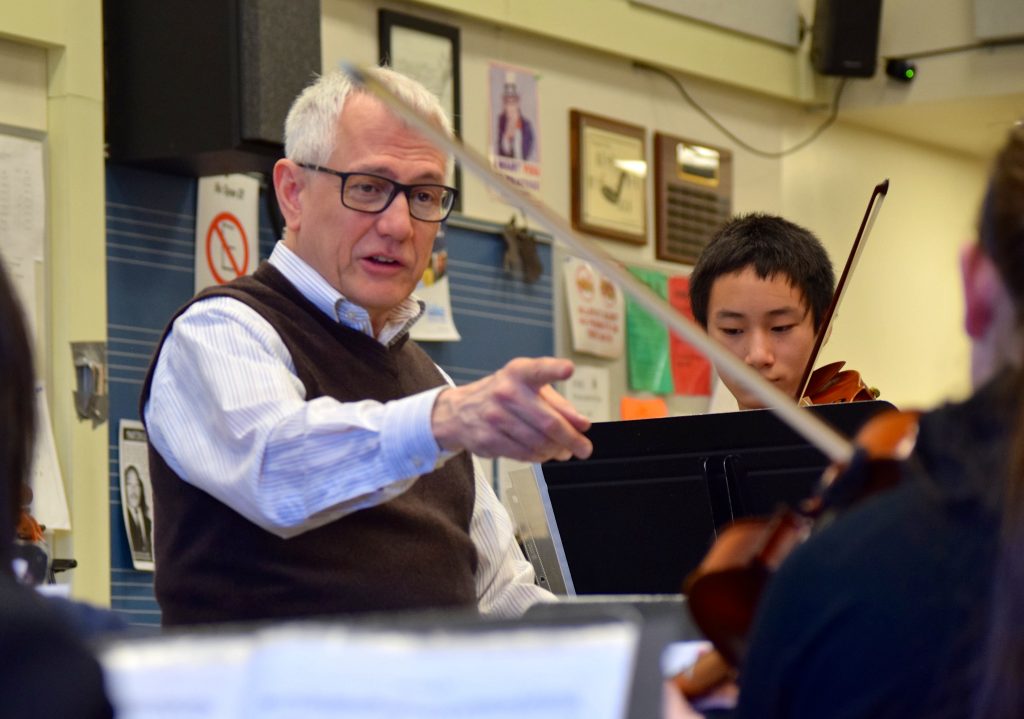 Pioneer High School Band Director David Leach says DeMarsh is one of the reasons AAPS enjoys the reputation as the flagship K-12 music department in the country.

As president of the Michigan School Band and Orchestra Association, District 12, Leach was charged several years ago with filling the vice president position—the most time-consuming, detail-oriented job of all.

He chose Joe DeMarsh, who held the position for three years.

“I needed someone who is outrageously organized,” says Leach. “That’s Joe. He’s the energizer bunny.”

Leach says the joke is that DeMarsh is so OCD, he would put the letters in alphabetical order to make it CDO.

“Every great tuba/baritone player I’ve ever had at Pioneer has been in Joe’s studio,” said Leach.

“A privilege to guide them”

While some believe middle school is the toughest age to teach, DeMarsh enjoys seeing the tremendous musical, social and physical growth that occurs between fall of sixth grade and spring of eighth.

“And that’s been our privilege to guide them through that,” says DeMarsh, sitting in his office lined with thank you notes from grateful students over the years.

Getting the kids ready for a concert has been the most fun part of the job.

In January, Tappan’s 8th Grade Concert Orchestra was chosen after a rigorous application process to perform at the 12th Annual Michigan Music Conference in Grand Rapids.

“That was the biggest highlight of my teaching career, to receive that recognition from a state-wide organization for an exemplary ensemble,” says DeMarsh, who was named the Michigan School Band and Orchestra Association District 12 Orchestra Director of the Year for 2015 for excellence in the classroom and on the concert stage.

In 2014, DeMarsh was asked to become vice president for the MSBOA District 12 Solo & Ensemble Festival, the largest student music event in Michigan.

“I thought that was a real compliment for them to trust me,” he says. “If you screw that up, you’re messing up thousands of people.  We had a rough time because the rollout of a new computer system did not go well. But it all went smoothly in the end because the District 12 directors are an awesome group of professionals and know how to work together to provide these experiences for our students.”

No chance of boredom during “retirement”

Though he knows he’ll miss the kids, there’s no risk of a retired Joe DeMarsh becoming bored.

As a member of several professional ensembles, including the Flint Symphony Orchestra, Toledo Symphony Concert Band, Today’s Brass Quintet, the FSO Brass and the Dodworth Saxhorn Band, he loves nothing better than to get together with his friends to create beautiful music for others to enjoy.

“I want to spend more time preparing for those and showing up well rested instead of just showing up,” says DeMarsh, noting the rigorous schedule an orchestra director maintains. “Given the fact that I qualify for my pension and I’m still only 58, there are a lot of things I still want to do.”

DeMarsh and his wife of 31 years, fellow musician Nora Schankin, have two children, Helen, 26, and Nicholas, 24. Helen is a graduate student at Johns Hopkins University, and because her classes are online, she’s able to live in Ann Arbor and work part-time at the University of Michigan. Nicholas is the kitchen manager of NeoPapalis in downtown Ann Arbor.

He’ll continue giving tuba lessons in the living room of his northwest Ann Arbor home, where his wife gives bassoon lessons in her basement studio.

“The time is right”

Retiring with 30.44 years spread over 36 years, DeMarsh is convinced the time is right to leave public education.

“There seems to be a lot of anti- public education people out there, and that’s disheartening to see,” says DeMarsh, noting that his pay is less than it was four years ago. “School funding has declined to the point where cleaning, maintenance, and building repairs are an issue. That’s really disheartening.”

While many say DeMarsh will be hard to replace, he knows the school will end up with a top-notch director.

“I don’t think we’ll have any trouble attracting young, energetic people with a lot of skills,” he said. “This is an attractive program. We hope it’ll happen before school ends in June.”

“Joe has always been a steady, collaborative contributor to the AAPS music department and his colleagues,” she says. “We wish him well as he pursues other passions in his life post AAPS.”