Todd Osborne was flying an Army Chinook back to Michigan last week after eight days of Hurricane Harvey recovery work when his veteran flight engineer got a text.

Bottom line: “Get ready for Irma.”

Osborne, 31, may yet be deployed for his second hurricane recovery mission in a month. Until then, he’s happy to be back at work with Ann Arbor Public Schools.

“I was humbled to be selected to go,” he says of the mission. “I signed up for the Guard to help my fellow Americans state-side, and this was an opportunity to do that.”

He was authorized a military leave of absence to go to Houston, where his job with the Guard was to fly the Chinook over flood-ravaged land, delivering much-needed food, water, and medical supplies.

Osborne said that seeing the flooded roads was something he’ll never forget, as he tried to imagine Ann Arbor with no access to US-23 and I-94.

“Incredible,” he says, sitting in his office in the lower level of the Balas Administration Building.

One of his most important missions was to deliver hay to the 10,000 cattle stranded on 75,000 flooded acres. Many were in failing health after eating plants drenched in salt water. Cattle are vital to the Texas economy, and it was satisfying to come to their aid, says Osborne.

As the water receded, the roads became usable, and air relief less needed. So the Guard returned to Michigan on Sept. 8, several days sooner than they had expected.

Osborne, a Saline native, earned his teaching degree from Eastern Michigan University and taught second and third grade in Toledo for a couple of years. Needing some supplemental income, and inspired by his father’s military background, Osborne signed up for the National Guard.

Always interested in aviation, he passed all the tests for admittance to flight school in Alabama.

Two years later, he was a pilot. Back in Michigan in 2015, he and his unit were deployed to Afghanistan. While training for deployment in Fort Hood, a UH-60 Black Hawk crashed into a tree, killing all four crew members on board.

Osborne was conducting training that turned into a real life search and rescue.

“It was pretty traumatic,” he says, noting that he had trained with the four men killed that day. “Before we were even deployed, we experienced that.” 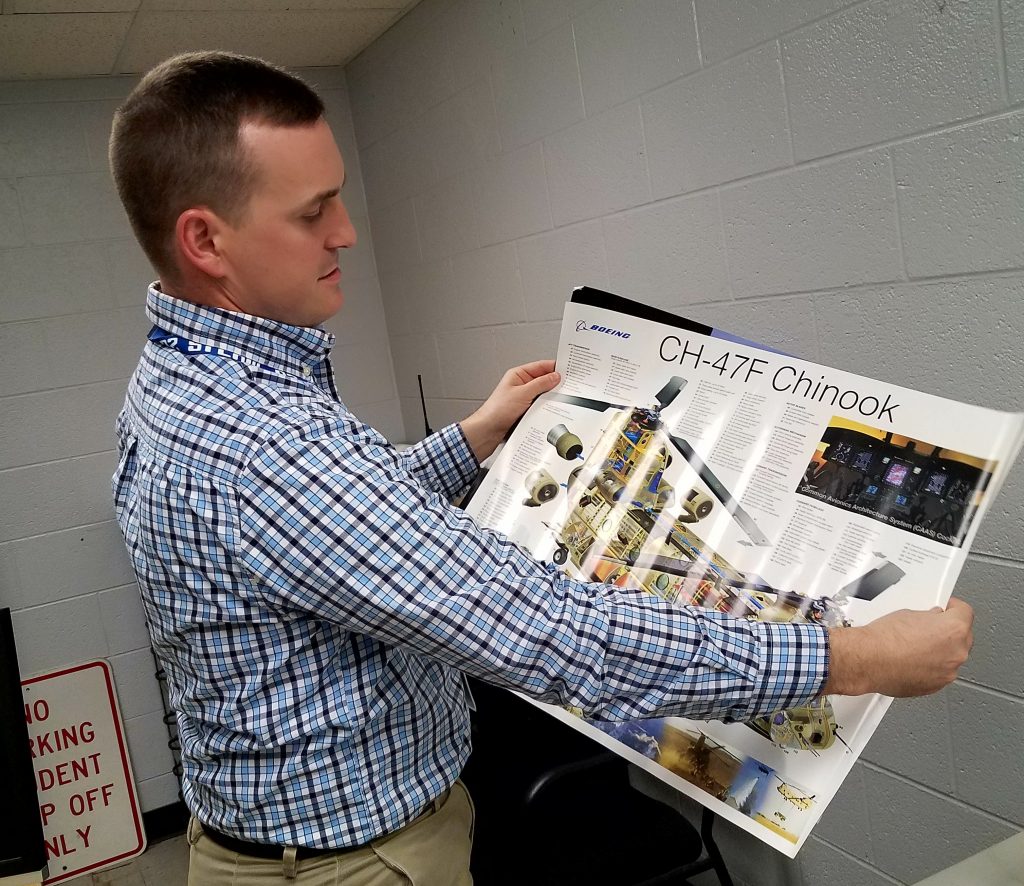 Following nine months in Afghanistan, Osborne returned to Michigan and soon found a job with AAPS, using skills honed in the military.

“You have 32 schools and everyone has different issues you’re trying to solve,” he says. “I try to look at it that I’m helping kids in a different way (than teaching).”

He’s under contract for six years beyond the end of flight school, which was March of 2015.

“As long as I’m still having fun and my family’s not suffering, Ill continue to be in the Guard,” says Osborne, who is married and the father of a three-year-old son.

Being in the National Guard requires a large time commitment, with weekly flight training at Selfridge.

As a part-time soldier, Osborne believes he has a certain mindset and way of looking at things.

His training in the Guard helps him in his job with AAPS, as he takes with him wherever he goes the Army’s leadership doctrine—purpose, direction, motivation.

Written on a sign in his office are words he lives by that he learned in military training:

Learning your job includes continuing to grow, he says, noting that his job with AAPS includes a lot of problem-solving, and working with contractors, getting them the equipment they need to be successful.

“You owe it to yourself and everyone around you to develop and continue to grow and bring new thinking and new abilities to the table,” he says.
“Because you never know what’s going to happen. You never know when a Hurricane Harvey is going to come with a back-to-back Hurricane Irma.”

Not wasting time on things beyond your control is also important, he says.

“When you’re in an environment with so many different factors going on, you have to be able to say, `I cannot affect this and have to let this go,’” he says. “We couldn’t control that the hurricane was going to hit. We could control how we were going to react to it.”