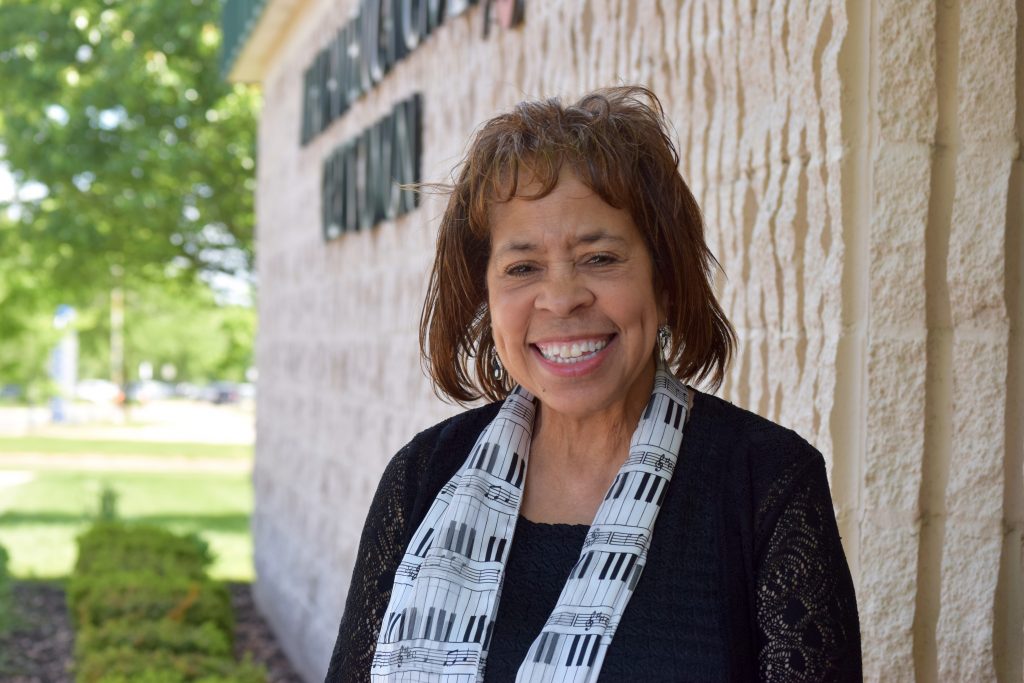 When Linda Carter’s first piano teacher tried to get her to sit down and practice for an hour every day, her parents knew that wasn’t going to work.

Linda Carter does not sit still for long.

Nor does she easily focus on any one thing for an entire hour.

So they found a new piano teacher who was fine with Carter’s preferred method of “drive-by” practice—standing over the piano for 10 minutes at a time, time after time.

Carter was just 10 when she decided that she would teach music herself. One music education degree from the University of Michigan later, Carter was Forsythe Middle School’s new orchestra teacher—and so youthful, a fellow teacher mistook her for a student and asked her to please get out of the teachers’ lounge.

Though she says she will always be a teacher at heart, Carter is mostly known as the tenacious, feisty president of the Ann Arbor Education Association—the teachers’ union.

On June 16, she takes on an entirely new role: retiree.

“I’m a 65-year-old woman still having a lot of fun,” says Carter in her Jackson Road office she figures will take weeks to clear out. “I still have a lot of energy. And it’s time to do something else.”

Carter is hoping “something else” involves work at the college level after so many years as an instrumental music teacher at 15 AAPS schools. In fact, she recently read about the University of Michigan’s Wolverine Pathways program, and would love to be part of helping U-M enroll more students from Ypsilanti.

“Even if they don’t pay me,” she says. “But if they want to throw a little money at me for driving Bart to Ypsilanti …” 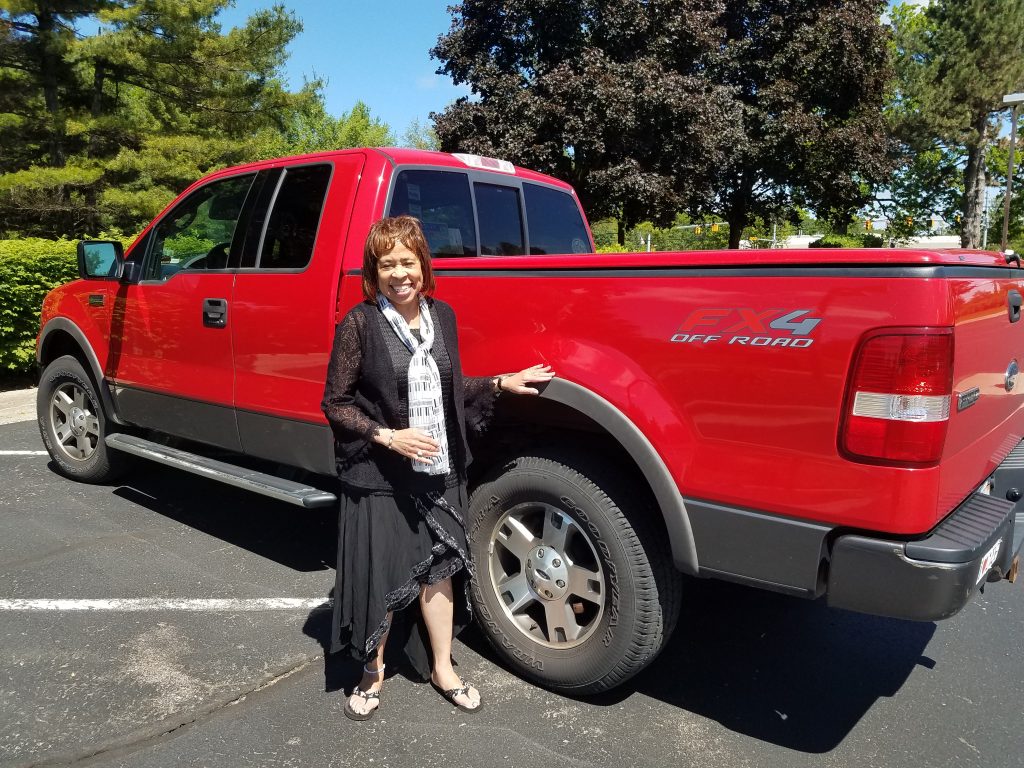 One thing’s for sure: Linda Carter will be missed.

He fondly recalls when Carter was his orchestra conductor for All City Music Night.

“My favorite Linda story is when she was a first or second year orchestra teacher and she was conducting us middle schoolers for the 1812 Overture,” recalls Klein, who was a Slauson student at the time. “They had a cannon that they fired several times during the piece which caused the entire orchestra to jump in their seats.  As a trumpet player, I was seated at the back of the orchestra so I could watch everyone jump each time they fired it.  It made me laugh so hard I couldn’t play my part, but Linda stoically continued conducting to the very end.”

“She can fill a room with her laugh which is actually contagious,” says Klein. “When she laughs, it makes everyone else smile or laugh.”

Retired Forsythe Middle School PE teacher Jim Dick says if he had to sum up the fun-loving Carter in one word, it would be “mischievous.”

He recalls the pranks she used to play years ago when they were co-workers, and how much fun she would bring to any setting. 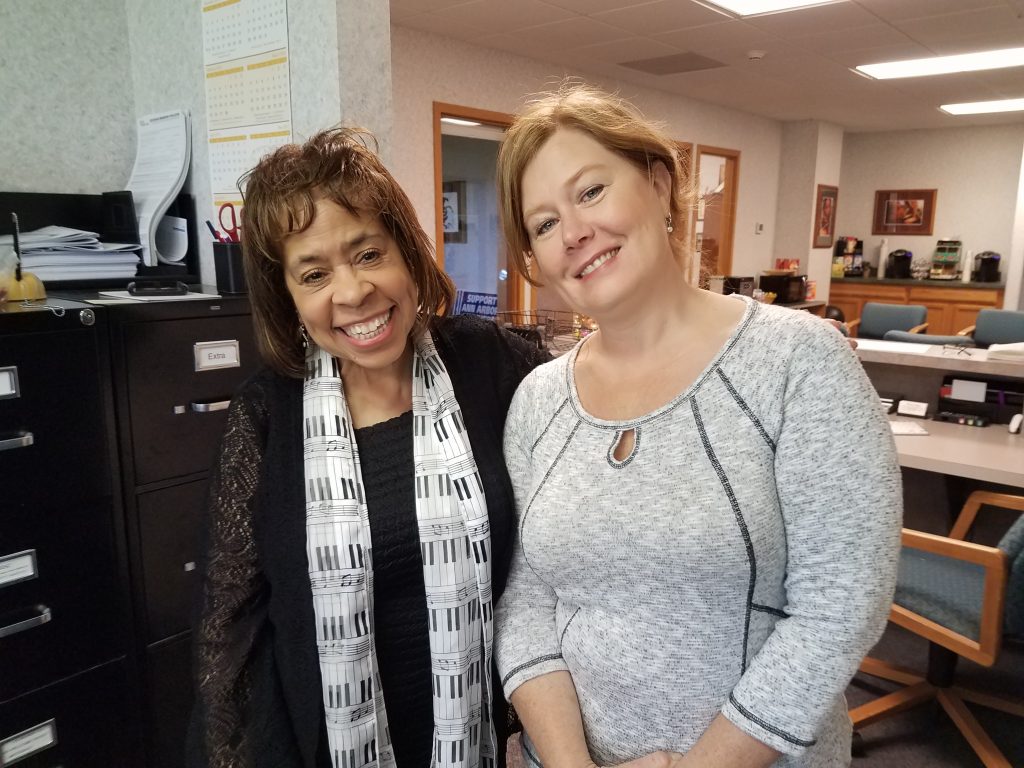 AAEA office manager Sheri Laidlaw has worked with Carter for 30 years, and says her boss is known for being high-energy, loyal (she once made a teacher apologize to Laidlow for being rude to her on the phone), unpredictable, and loads of fun.

“She has had my back for 30 years, no matter what,” said Laidlow. “They tried to get rid of my job. People being mean to me. Anything. She has just had loyalty.”

Carter also has a spicy vocabulary, she says.

“But never in front of a child,” says Laidlow. “Never! I don’t know how she does it.”

Growing up in Detroit, Carter won an audition to play string bass at Cass Tech High School (though McKenzie High was in her back yard). Next came a scholarship to the University of Michigan, where she earned two music education degrees. Her career took off from there. After teaching in every middle school, and many of the elementary schools, Carter became vice president of the union in 1990, and has been the president since 1992.

Carter most often answers to her last name rather than her first, although some call her “Wonder Woman” after that other Lynda Carter, and her entire family calls her by her middle name, Sheryl.

Carter says the hardest part about her union job is attending what she calls “a naughty teacher meeting.”

The day after those discipline hearings, she visits the teacher at school to make sure that teacher is doing OK—a carryover from the days she would make sure a student was adjusting to the disappointment of not making first chair.

Also hard has been attending funerals of teachers she’d grown to love and respect.

Fighting for the teachers

A significant part of her job, of course, has involved contract negotiations, and making sure to always mobilize the AAEA membership with useful information about contract talks.

Carter believes she’s gotten along well with each of the 13 superintendents she’s served under during her 43 years with AAPS. But Superintendent John Simpson was a challenge back in 1994.

She recalls that the two were driving together to visit a building during the early spring of 1994 when he looked through the AAEA contract and said that the AAEA contract was very rich in contract language, and that he couldn’t believe the AAEA salary schedule.

In August of 1994, teachers went on strike for two weeks. When the strike was over, Carter told the media that she would not say anything to Superintendent Simpson for the rest of the school year.  When her mother Flossie, heard that comment, she called her daughter and said: “Linda Sheryl, you and I and the superintendent are going out to lunch!”

“Like hell we are!” retorted Carter. The three did go to lunch-though Carter recalls wanting to throw her BLT at Simpson the entire time.

Though she’s been known to harbor a grudge against a relative or two, when it comes to work relationships, she believes it’s important to be approachable. Wherever she goes, teachers feel comfortable walking up and talking to her about what’s on their minds.

What does Carter say to critics who believe the teachers’ unions protect teachers who don’t belong in the classroom?

“We make sure that teachers have due process,” she says. “And on my watch in the last 30 years, there have been several tenured teachers who’ve been ushered out,” she says. “When the administration does their homework and documents, and it looks as if this person has not done a very good job with kids, is not as knowledgeable as they need to be in their subject area, and with the way the law is now … if you get three years of ineffective evaluations, you’re out the door as a tenured teacher. “

Tenure used to be a two-year track, but now it’s five years.

“Although I firmly believe that after two years—actually one year—you know whether this person is going to stay another 42 years as I did,” she says.

She recalls the teacher who was struggling quite a bit, and the discipline in her classroom was horrible—in September.

So Carter drove over to the school to talk to the teacher.

“I got there, and it was chaotic,”she says. “I said to her, `I’ve been at this a long time. Where do you see yourself as a teacher five years from now?’ She says, `Miss Carter, I can’t see myself in this profession five more minutes from now!’” I said, `You don’t? Let me help you write your resignation letter.’

“It’s all about being passionate!”

Proud of her “kids”

She’s especially proud of her “five kids”— current AAPS music teachers who were at one time her students: David Leach at Pioneer, Abigail Alwin at Clague, Tim Wilkins at A2 STEAM, Jeff Willets at Eberwhite, and Lauren Stout, who is in her second year as band director at Tappan and has caused Carter an uptick in “mama pride” while attending her concerts. In the first row, of course.

“Miss Scarlett, I don’t know nothing about birthing no babies!” says Carter, quoting a famous line from “Gone with the Wind” before noting that she’s birthed all sorts of musical talent for generations to come.

Even though she’s ready and eager to retire, Carter has no intention of slowing down—whether or not she moves on to another career.

She figures she’ll have more time now to run every morning. She will serve on the Ann Arbor Youth Chorale Board of Directors and the Ann Arbor Concert Band. And she’ll remain active with the AAPS Employee Bowling League she now heads.

And she’s made so many good friends among teachers and staff, including students she mentored and watched as they eventually became coworkers, she knows she’ll never be lonely or bored.

Although she can’t say she’ll miss the Wednesday night Board of Education meetings, she was happy to have attended them for so many years.

“We bargained to get a seat there,” she said. “Having a voice at those meetings is really important.”

Asked to sum up her decades with AAPS, Carter said it’s simple.