It would be easy to mistake 95-pound, five-foot Diane Wahl for a fifth grader as she runs around the Wines Elementary gym, laughing and tossing bouncy balls at the kids.

But in fact, Wahl is the longest-serving teacher in the Ann Arbor Public Schools. The Ann Arbor native got a job as an AAPS physical education teacher right out of college 46 years ago. And while people often ask her when she’s going to retire, she has no answer for them because she just doesn’t think about it.

She loves the kids. She’s in good health. So what’s the hurry?

“When I first started teaching, I thought I’d only last 10 years,” says Wahl, who has taught at about half of the AAPS elementary schools. “I didn’t know what I was thinking. And then all of a sudden, it was 25. Thirty. Whatever. I like the kids. They keep me young; keep me in shape and on my toes. They keep me motivated. I don’t know what I’d do if I retired.” 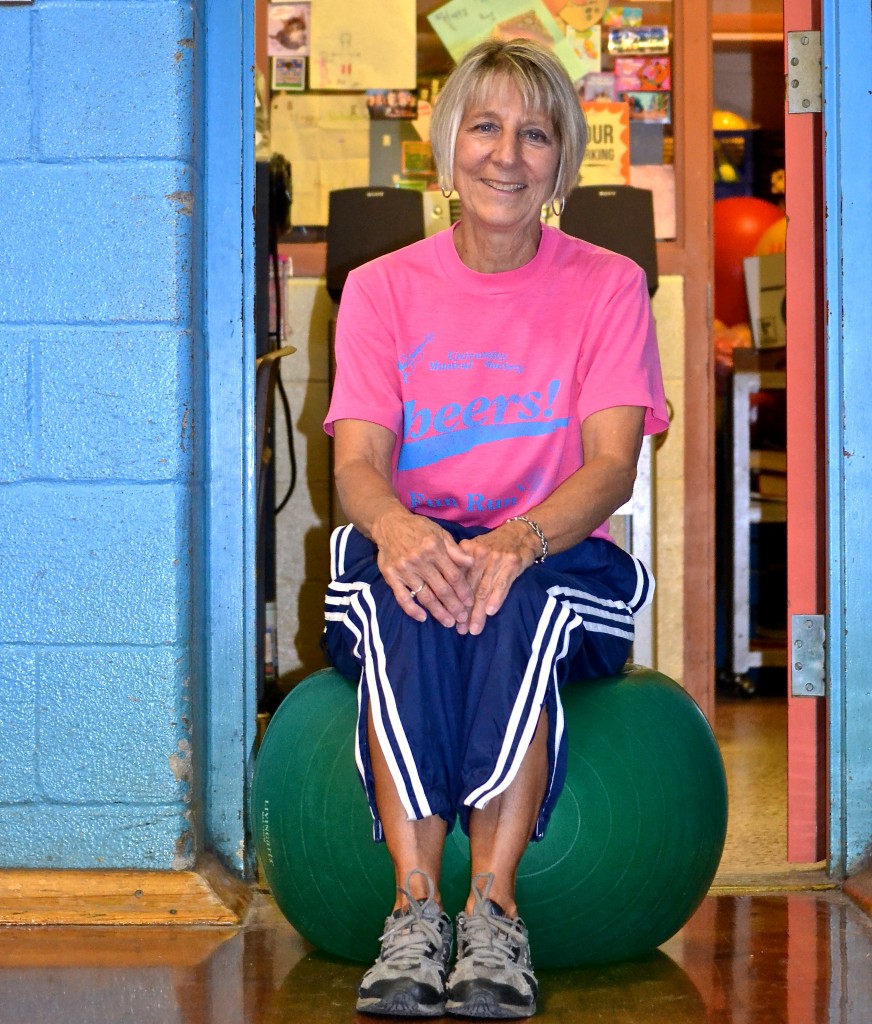 Nobody has closer ties to Wines than Wahl.

The Ann Arbor native attended Eberwhite Elementary until her family moved a few miles west and she attended fifth grade at Wines Elementary the first year it opened in 1957.

She was also among the first students to attend Forsythe Middle School when it opened.

Some of her favorite memories are as a cheerleader at Ann Arbor High School, from which she graduated in 1965.

“We really didn’t have sports for girls unless you did after-school stuff and I wasn’t interested in that,” she says. “Being a cheerleader was a lot of fun. Probably the biggest things I remember most was doing a back flip off a mini tramp in the lobby at Pioneer during basketball season.”

Because the girl who usually spotted her wasn’t there, she chickened out halfway into it and hit her head, fracturing her skull. She was whisked to the hospital in a police car.

“That was probably the highlight of my high school career,” she says, smiling.

After high school, she majored in physical education at Western Michigan University with the intention of teaching gymnastics. But when she got her first job teaching p.e. at Eberwhite, Burns Park, and Carpenter, she realized she’d found her niche.

Wahl spend her first years as a teacher working at nearly half the schools in the district, and has been the main p.e. teacher at Wines for the past 35 years.

“I’ve been through a lot of principals,” she says. “I’ve outlasted them all.”

“I have millions of fond memories of Diane as my teacher,” says DeYoung.
“Now that I am principal at Wines, it is an absolute pleasure to work with her. As the PE teacher, she knows every child in the building. They all love her. She is the head of our safety patrol. She takes students on mile walks every Monday and Wednesday for “Wahl’s Walkers.” She is out directing traffic before and after school every day. The number of things Diane does for our school are innumerable.” 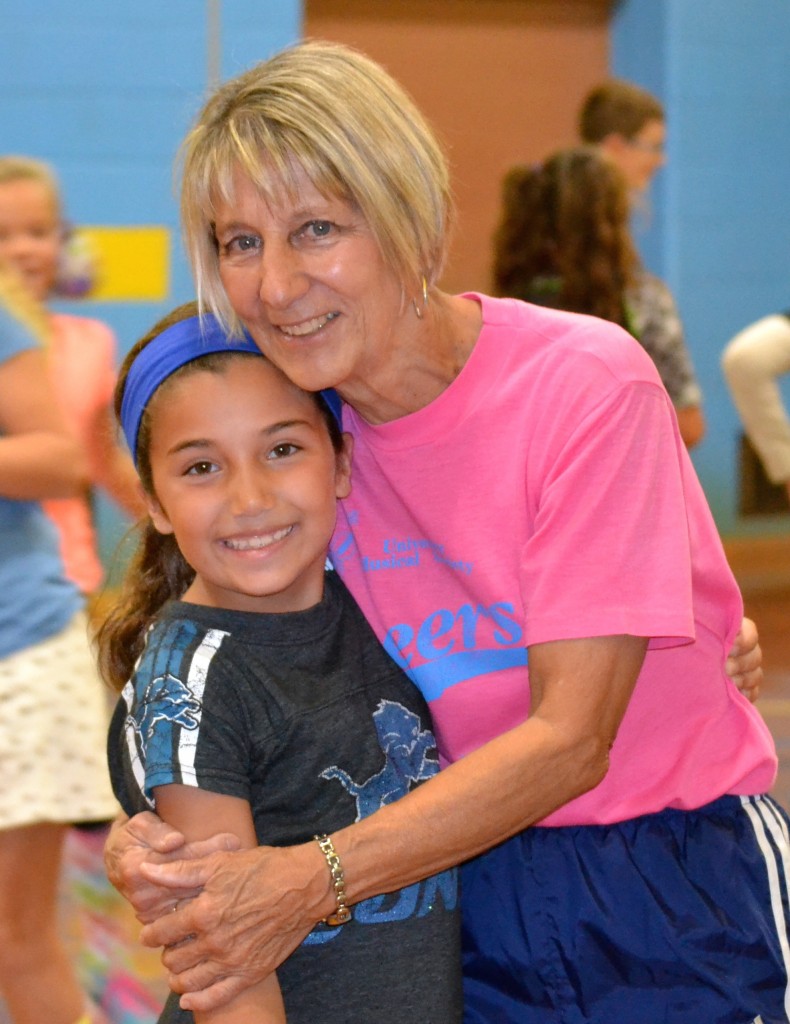 As much as she enjoys her job, Wahl says it’s not as easy as some people may think.

“(They think) you come in nd throw a ball out and that’s it,” she says.

But she has to remember which child has what special need, such as asthma, or diabetes, which child may need an Epi-Pen, or may have a seizure, and which children don’t work well together in the same group.

“You can turn your head and someone can get hurt like that,” she say, snapping her fingers.

In a recent gym full of 28 students, Wahl spotted a girl about to start crying because her feelings had been hurt. She then tried to soothe her amidst the din of the gym.

“I enjoy seeing the children who are less skilled succeed,” she says. “They are so excited when they improve.”

And there are other perks, such as her casual work attire of warm-up pants or shorts, and often a Wines sweatshirt or T-shirt, which makes it simple to decide what to wear in the morning.

But the biggest advantage of teaching physical education is that she gets to know all the kids in the building, says Wahl, who learns every name of every child.

Twice a week on the lunch hour, she and about 50 students in grades 2-5 who call themselves Wahl’s Walkers walk a mile, rolling down hills and “penguin sliding” if there’s enough snow.

She’s been doing it at least 30 years just because she loves it and wants to share her love of walking with the students and parents who also show up.

Wahl lives in a three-bedroom ranch in the old part of Dexter that is similar to the one she grew up in on Hatcher Crescent. On weekends, she walks, lifts weights at the gym, and gets together with extended family in Tecumseh many Sundays for supper and games.

Over 46 years, of course, Wahl has been through a few teacher strikes. She once picketed for two weeks, which ended up being a good thing because she took an interim job on her cousin’s pickle farm that turned into seasonal work ever since.

Every summer morning, she drives to the farm, bags sweet corn, and brings it back to the stand where her niece Missy sells it at Little Porky’s.

Also every summer, Wahl plays softball on a team with players ranging in age from 22 to 72. She serves as the manager and catcher, a role she can easily fill because she is flexible enough to jump up from a squat and throw to first base time after time.

“I can also still stand on my head,” she says, smiling.

She figures it’s all in the genes. Wahl’s mother died two years ago at the age of 96, and was able to stay in her own house til the end because Wahl and her sisters, Sandy and Roxanne, checked in on her every day for years.

David DeYoung can vouch for her energy level.

“I can say that Diane has the same amount of energy today,” he says, “as she did some 35 years ago when I was running around in her gym.”

So if you’re wondering when she’s retiring, forget about it.