The project is the culmination of studying habitats – animal, human and fairy – with their teacher who, along with her illustrator husband, Jonathan, shares life in Ann Arbor with the fairies, also known as the little people.

This should not be confused, of course, with the term “kidpeople,” which is how Kathleen Wright refers to her young students at Ann Arbor’s Lakewood Elementary School, which she says “helps build class spirit.”

But, we digress … back to our fairy story.

The Wrights first “discovered” miniature fairy doors around downtown Ann Arbor in 2005, leaving journals in which visitors have written and drawn pictures. And, although the tiny entryways have become a fixture to many who visit, to Wright’s kindergarteners, a recent trip to view the doors was new and magical.

Parent Christopher Cerda said his daughter was so excited that she spent the evening before the tour making her own fairy house. On the tour, she sported a special fairy shirt.

“She just can’t get enough of it,” said Cerda who was one of a dozen adults who came on the field trip this month.

Kathleen Wright has a special “in” with the fairies: Her artist-designer husband, Jonathan, is the author of the 2007 “Who’s Behind the Fairy Doors?” and operates the Urban-Fairies.com Web page that chronicles the urban doors that have been in Ann Arbor since 2005. Together, the two are writing fairies-themed storybooks, and creating an “Urban Fairies Field Journal” as their next projects.

During the recent trip downtown, the group ended the morning at Sweetwaters Café where Kathleen Wright is filling cupcake holders with miniature cookies, raspberries, the tiniest of other treats and plastic thimbles with “fairy lemonade. “This is as much fun for me as for them,” she noted. 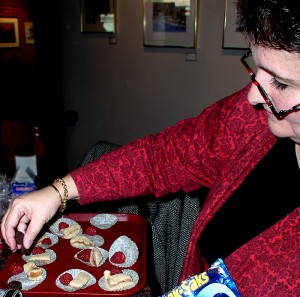 Retired Ann Arbor teacher Jan Brimacombe came on the trip with her grandson who is in Wright’s class. “It’s been fun for me to get back with kindergarteners and reconnect,” she said. Brimacombe taught at Bryant Elementary School for 20 years.

Cerda said Wright and the staff’s approach at Lakewood Elementary has inspired him. “It’s a joy to see so many teachers and staff in the district work so hard to make a great experience for the kids,” he said. “It’s heartwarming.”

Kathleen Wright said the fairies and other elfin beings have been part of how she keeps learning magical for her students.

Fairies, leprechauns, unicorns and other fantasy beings have been a fascination of Wright’s since a trip to her family’s homeland of Ireland at the age of 4. Her childhood was spent with the joy of being allowed to explore her thoughts freely, she said.

She met Jonathan while attending the University of Michigan and the two married 22 years ago. The first fairy door entered the picture while Kathleen ran a preschool in their home; Jonathan found just the spot for the tiny door which inspired the young students. “They wrote, they created things. It was hugely popular from the get-go,” she said.

One thing led to another, and pretty soon, Jonathan created more fairy doors at businesses downtown. He left guest books at each location, inviting visitors to write and draw in them. He used original illustrations and his interpretations of them for his “Who’s Behind the Fairy Doors?” book.

Kathleen Wright’s life evolved from 15 years of preschool teaching into professional storytelling and, eventually, to her life in the Ann Arbor classroom 11 years ago and, now, her involvement with the fairy project which she ties into her teaching.

Throughout it all, she has had a love of literacy and a general love for words. As she puts it: “The gift of gab – I’ve put it to use.”

In Jonathan Wright’s case, “I was steeped in the arts” having a father who loved to draw and a mother who was immersed in music. “I was always encouraged when I was drawing something,” he said.

As for the fairies? The Wrights stress that they’ve never seen them.


Occupations: Kindergarten teacher at Lakewood Elementary and freelance graphic designer and illustrator, respectively. Both have been part of creating the fairy doors around Ann Arbor and chronicling them in writing and illustrations. She is a professional storyteller and also does training and workshops for teachers. She has a track on the Ann Arbor Storytellers’ CD Signature Stories.
Education: They attended the University of Michigan together.
Ages: Both are 49.
Residence: The city of Ann Arbor.
Family: Two daughters, Samuelina, 16, and Delaney, 14.
Pets: A rather large Yorkie named Popeye.
Community service: Much time is devoted to chronicling the fairy doors in books and stories and following the journals that visitors write in and the gifts that are left for the fairies by visitors. Monetary donations left for the fairies are given annually to the Food Gatherers.
Favorite books: Both enjoy picture books and have a collection of them around the house. Recent favorites of Kathleen’s have been Kelly Corrigan’s “The Middle Place,” Patrick Taylor’s “Irish Country” series, and “The Guernsy Literary and Potato Peel Pie Society” by Shaffer and Barrows.
Life philosophies: “If you’re gonna do something, do it with gusto! – Kathleen Wright.
“Imagination is key to the fairies and that should be integrated into one’s life too.” – Jonathan Wright.
Find the fairy doors: urban-fairies.com/

The field trip is just one example of how the Ann Arbor Public Schools’ humanities curriculum for elementary students works. […]

An exciting project at Lakewood Elementary is bringing creativity and collaboration to a whole new level. […]