The University of Michigan softball team is pretty busy these days. The team just won another Big Ten Title, their sixth in a row, and are set to play at the next Big Ten Tournament in Nebraska this weekend.

But today the players took the time to visit their pen pals in two fifth grade classes at Abbot Elementary and to do some community service cleanup together on school grounds.

The players wrote back and forth with their fifth grade pen pals for three months. Players sent the students posters about particular themes, such as leadership or motivation. The fifth graders sent their own posters back.

When the players met their pen pals, students took the chance to ask some pressing questions, such as: What’s it like to be a Big Ten athlete? and Are you ever nervous on the field?

The players also talked about working together as a team and balancing their busy schedules. (When they’re not at practice or playing a game, they’re studying.)

Then the players helped students clean up the school grounds. The gathering ended with the players running through a student tunnel and “Hail to the Victors” (see video above). 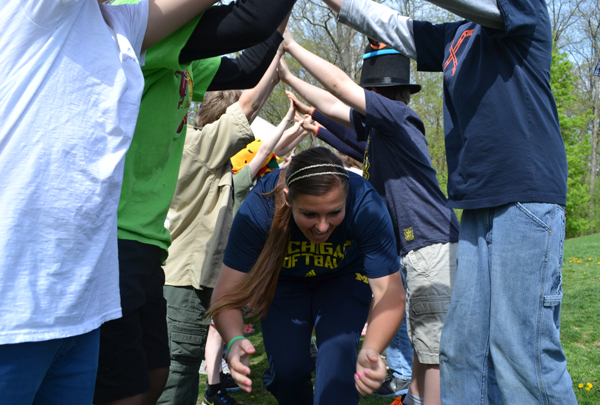 Hundreds of colleges and organizations gathered in the Pioneer High School cafeteria for the school’s 28th annual College and Career Fair. The event attracts over 1,000 high school students, said Joyce Williams, one of the […]

WITH VIDEO: Assistant Secretary the the U.S. Dept. of Education Peter Cunningham met with teachers, government students and administrators, telling them “there’s no big, bold new agenda” in terms of dollars, but that the department is promoting teaching as a profession. […]