An upcoming garden tour and reception on Sunday, Sept. 20 will highlight six prolific gardens in the Ann Arbor Public Schools. All are the result of many hours of volunteer labor by parents, children, staff and neighbors.AAPS District News

And nobody knows more about that than Dicken Elementary garden coordinator Carolyn Herrmann, who in two years has helped turn a small, under-utilized vegetable garden two years ago into an edible organic garden complete with an outdoor classroom, raised beds tended by all classes, and wood chipped paths that allow children to tromp through the woods in the fresh air, learning about butterflies and foliage.

The garden is integrated into the classroom curriculum in all grades and subjects, starting with the youngest children learning about colors in the rainbow garden.

“This has been almost like a fulltime job for me,” says Herrmann. “People are very busy these days and gardens take a huge amount of physical labor. But it’s such a great thing for the body to be so active and out in the fresh air and sunshine.”

Dicken Elementary received the following grants last year to expand the garden into what it is today:

Herrmann said the main goals are to educate students on living healthy and growing organic food; teaching them to respect and care for the earth and each other; provide students with a hands-on way to learn lessons that complement curriculum and beyond; and be a model for families that may want to explore growing their own produce.

Herrmann spent weeks leading up to the big spring work day prepping the site; securing supplies; meeting delivery people at the site while working on edging out the reading garden and Little Free Library sunflower area.

She said a lot of credit goes to Michelle Loewe, who started and ran the program before she recruited Herrmann to take over. Working together this past school year, the two were able to oversee the transformation. Hermann also expressed thanks for all the Dicken parents who helped, especially Peter Arendall, whose assistance was integral to many of the infrastructure additions, including the pole bean house, fencing, gates, trellis and chalkboard. 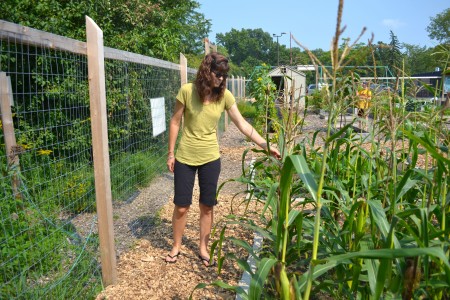 “It’s fun to be around all the plants and be outside,” said Jonah, whose favorite part of it all has been learning about the various plants.

Jonah is proud of the fact that his family actually came up with the name of the garden.

“Its name is P.L.A.N.T., which stands for planting, learning, and appreciating nature’s treasures,” he said.

“Everyone’s so committed to it, and it’s so beautiful,” he said.

Asked to name his favorite part about volunteering in the garden, he said: “Just seeing it change from what it was at the beginning to what it is now.”

Nikki Klein said her family likes to garden, but doesn’t have much space for one at their house.

“We were involved in a community garden through our synagogue for several years, and when the Dicken garden started up, we jumped right on because it’s so much more convenient,” she said. “We can see it every day, and the kids can really appreciate it. And having four kids going through Dicken, we’re very invested in the community and the school.

“A lot of the kids who go to Dicken live in apartments and communities around here that don’t have anywhere to garden. The kids enjoy it so much.”

She said the garden about four years ago started with she and another parent digging a patch of soil and placing some seeds in it.

This past spring, because of the grants, there were rapid and dramatic changes.

“I’m very thankful for Carolyn,” said Klein. “She’s made it what it is.

Principal Mike Madison said the school was blessed to have Herrmann and Loewe in the Dicken community the past few years.

“The transformation from just a few plots of wild flowers to a comprehensive interactive educational garden … leaves me speechless,” he said.

This is Herrmann’s last year as garden coordinator because her daughter just started at Slauson and her son is in his final year at Dicken.

So one of her jobs this year will be to find a few parents to step in and take over.

The hardest part about running a school garden is getting enough bodies in the garden to help with upkeep and help run programs, she said.

But she wants everyone to know what an enriching and valuable experience it is for Dicken students.

“Everyone who volunteers gets to witness the students reconnect with nature while they enthusiastically help in the garden,” she said. “It is very rewarding to have the opportunity to view the world through children’s eyes.”