At the Community Budget Forum Thursday night at Huron High School, the crowd of parents and staff listened attentively as the administration laid out the 2013-2014 budget and the suggested cutbacks. The atmosphere was civil, constructive, and most of all concerned.

There is plenty to be concerned about. The Ann Arbor Public Schools district is facing a $8.6 million shortfall next year, and large budget deficits are projected to continue in the coming years.

AAPS Superintendent Dr. Patricia Green asked the crowd to understand the source of the cutbacks, and to offer constructive feedback.

“This is a serious situation, and it’s not new,” Dr. Green said. “Tonight’s not about: Don’t cut this, or don’t cut that. Folks, I’m being as honest as I can: Things are going to be cut. We don’t want to do it. But we have to balance the budget by law.

“So we need you to join with us in your very best thinking, to help make sure the survivability of the Ann Arbor Public Schools, as we know it and love it, goes on for many, many years.”

As per-pupil funding has not increased, other costs have increased, such as transportation and health care.

To address the budget deficit for the coming year, the administration has made the following recommendations for instructional services, totaling a reduction of $6,246,068:

Overall, 52 staff would be removed in the listed cuts to instructional services.

The administration has made the following recommendations for athletics, totaling a reduction of $512,685:

The administration has made the following recommendations for district operations, totaling a reduction of $1,230,000:

Overall, 17 staff members would be removed in the listed cuts to district operations.

The administration has made the following recommendations for district-wide reductions:

Overall, 6 staff members would be removed in the above cuts.

In addition to these recommended cuts, Hoover outlined concessions that have already been taken this year to address the deficit: teachers and three bargaining units have agreed to a 3 percent salary reduction. 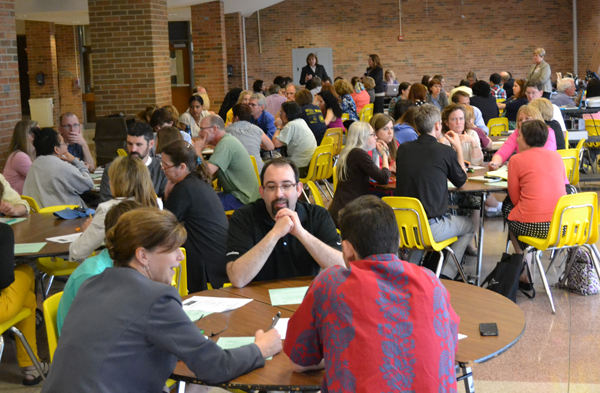 After Hoover’s presentation, attendees talked at tables about ways to address the budget and their concerns about next year’s proposed cuts.

Many of the concerns surrounded equity, especially in regard to eliminating high school busing and reading intervention specialists.

Communications Director Liz Margolis said that this year the district gave students AATA passes for three bus routes. “It worked very well, but I will tell you the AATA service is limited. Where we need it the most is in the rural areas and AATA does not provide service there.”

Deputy Superintendent for Instruction Alesia Flye said that the elimination of reading intervention specialists means that the additional reading support would need to be provided by teachers, and some schools with Title I funding might be able to provide extra resources for the students who need the support.

A group of Huron students who attended the meeting suggested that eliminating some middle school sports is also an issue of equity. The students whose parents can afford paying for non-school club and travel sports during middle school will get more experience, so by the time they are in high school they will be more likely to make sports teams than the students of lesser means.

Many were also concerned that the elimination of seventh hour would affect students’ course options or even increase class size. AAPS Director of Student Research Jane Landefeld said that class sizes would not be affected by eliminating seventh hour. “If we need to move to having seven classes during the day, we would do that,” Landefeld said, but the extra seventh hour would not take place after school. Instead, seven hours would be offered during the regular hours.

Although the attitude of the evening was civil, attendees were clearly frustrated with the lack of state support for public education.

“These people are just trying to do their jobs,” said Michael Elliott, a parent of a Huron junior. “We should put the pressure on Lansing.”

Chuck Hatt, the AAPS coordinator for literacy and social studies, said he hoped the community could work together in distributing the sacrifice.

He also added that the pressure should be directed at the state: “If we don’t act now politically, this is just the beginning.”

The next Community Budget Forum takes place at Pioneer High School on Tuesday, May 7 from 7-8:30 p.m.

Related on the AAPS News:

Ann Arbor’s Partners for Excellence program has been in place for 25 years. Today, there are more than 30 formal partnerships with local businesses and civic groups around the community. […]

Mitchell Elementary students learn more while reading, thanks to a better selection in the school’s Listening Library. A grant from the AAPS Educational Foundation made the project happen. […]

WITH VIDEO/SLIDE SHOW: The Leslie Science and Nature Center visits the school weekly for the club, which includes both work and play. The center also partners with the Wolf Family Foundation to provide larger, student-driven projects at Carpenter, King and Northside elementaries each year. […]