Rita Hepner was one of about a dozen older residents who had sat patiently on the patio of Clare Bridge Memory Care facility in Ann Arbor one recent sunny afternoon waiting for the busload of A2STEAM @ Northside third graders to show up.

Their expressions brightened the moment the students walked through the door and found their “elderbuddies.”

Within minutes, each elder was listening to his or her biography written by the students who have visited them several times.

“I think it’s wonderful!” said Hepner, holding the book full of pictures and prose chronicling her life. “The best part is, they wrote it with their hearts.”

A2STEAM third grade teacher Rachel Toon was inspired to create the Biography Project after listening to Nell Duke, author of “Reading and Writing Genre With Purpose,” at a conference at Hillsdale College two years ago.

She first tried the project last year at Bryant Elementary with her second graders, after connecting with Clare Bridge because the facility specializes in memory care.

Toon says that the elderly in America are often feared or regarded with revulsion by young people.

“This can be changed through personal connection with the elderly,” she said.

While teaching them about Alzheimer’s and memory loss, Toon hopes the students understand the urgent need for preserving memories.

“And what better purpose to learn how to write an effective biography?” she asked.

And because the curriculum focuses on life cycles in science in second and third grade—“What better way to understand the human life cycle than to learn someone’s life who has been through every living stage?”

Ebony Adams, the activities coordinator at Clare Bridge, was excited by the idea.

“They’ve created bonds with the residents that have been amazing,” said Adams. “Last year they did this program, and when they came to deliver the biographies, the residents cried. And for weeks, even though they couldn’t remember specifically what happened, they would say, `The kids came to see me. The kids are coming back.’ So they look forward to this. It touches a part of their mind that never leaves, which is amazing.”

Moving to A2STEAM this year allowed Toon and her third grade team colleague Nate Hattto to take this project to the fullest potential.

“Using Duke’s model of teaching reading and writing, plus the Buck Institute of Education’s model for Project Based Learning, my students this year had a robust framework to learn and the urgency and agency to create a real-world product,” she said, noting that she invented the word “elderbuddies” to capture to relationship she hoped would form between the generations.

Andrea Wilkerson, whose daughter, Chelsea, is one of the third graders, believes the program has been a great way to get the kids out in the community.

“One of her most exciting trips was a week ago, when they came and played their ukuleles for their elderbuddies,” she said. “And they’re very excited to share their biographies today. She talks about it all the time. It’s a great partnership.” 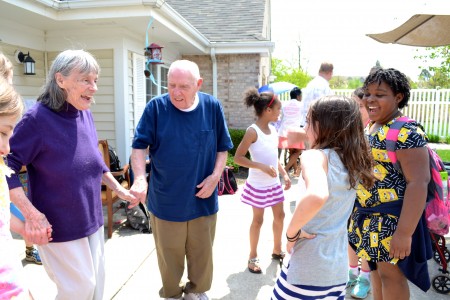