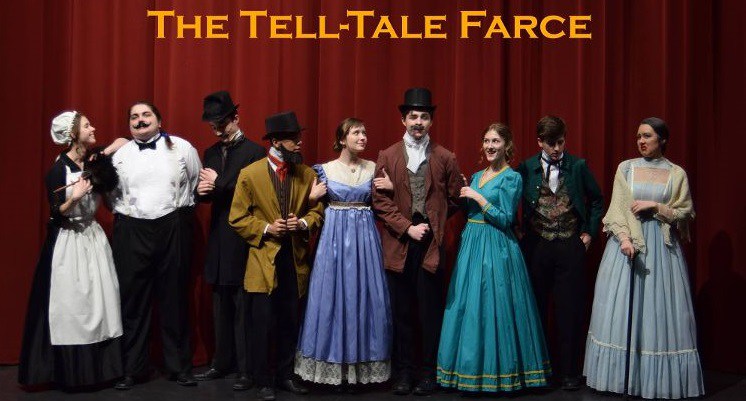 While this visit is temporary, going back indoors will be nothing short of a laugh fest this weekend (and next) if those doors lead you to “The Tell-Tale Farce” at Meyers Auditorium, where a cast of nine and crew of 17 Huron High School actors will bring the comedy to the Huron Players stage.

The year is 1848 and Edgar Allen Poe is in a jam; in spite of its incredible recent success, The Raven hasn’t exactly been a gravy train, and Poe can count the few dollars he’s earned on two hands. So as he’s wandering weak and weary – not to mention flat broke – the poet gets wrapped into a twisted hoax of mayhem, mischief and not-so-mistaken identity when an impersonator steals his name and his spotlight.

In his third production with the Huron Players, Sam Klinich is the phony Edgar Allan Poe, Richard Muffinbridge. He’s having fun with his role.

“This is the most hilarious show I’ve ever been in,” says the 16-year-old Huron junior. “If you like facial hair, door slamming and are tired of Shakespeare, this is the play for you.”

He identifies with his character in a real-life way.

“Richard and I both come up with ideas that may or may not work, but we go for it anyways. Sometimes these ideas don’t really work out and another half-baked idea is required. I definitely see some similarities with myself.”
Senior Mary Collins is wrapping up her high school acting career portraying Sarah Dowling, a woman in her early 30s who, she says, is considered to be a hopeless spinster, but has actually fallen head-over-heels for the Poe imposter.

“It’s hilarious,” she says. “There’s something funny in it for everyone.”

Lots of laughs, she admits, come from a lot of work preparing for The Tell-Tale Farce.

“So much effort has gone into this show,” Collins says. “It’s been an absolute joy to work on it alongside eight other cast members who are each incredibly talented and hardworking. Also, [at Huron] we do all of our own student-run technical theater, so there’s been a lot of thought put into everything from lights, to costuming, to painting. When you come see a Huron Players show, you see the combined efforts of dozens of students who are learning important theatrical skills and passing them on to the next generation.”

The Tell-Tale Farce is the tenth production for 18-year-old Collins, who finds the small cast of this one enjoyable because it gives her more time to focus on little details that she doesn’t necessarily get the chance to within a larger cast.

Sam Kinich says that he continues to learn from his director, giving the instructor extra praise for his guidance along the way.

“Mr. Stringer is probably the best person to be your first director and producer when you are first going into theater,” he said. “He is open to anything that could make the show better. You find that he teaches you things without even noticing because you’re either laughing too hard or too focused on learning your lines.”

“He encourages everybody to contribute their own ideas and he’s good at balancing them and making thoughtful directorial decisions. He is good at allowing actors the space to try things different ways and bring their own take to their characters,” Collins says. “He never tells us one specific way that we should read a line. Instead, if it isn’t coming across the right way, he’ll help us figure out what the line is supposed to be conveying in the context of the scene, so that we realize how it would make the most sense to say it.”

Stringer, who is Huron Players’ adult sponsor and director, loves working with actors who are not afraid to try new things and bring their own ideas into rehearsal.

“Many of this show’s funniest moments materialized right there on the spot while we were working the scenes,” says Stringer, calling the show “two hours of rollicking goofball comedy.”

“It’s always fun to have the last mainstage show of the year be a comedy. You know, close the year out with bang and a laugh,” he says. “I do love a good farce. I am also a gigantic Edgar Allen Poe fan, but you don’t need to be an Edgar Allen Poe fan to have a blast watching this show.”

“Best night out you’ll have all year.”