It was supposed to be just another (glorious) day at the week-long Pioneer Band Camp at Interlochen Center for the Arts.

Then it got really interesting.

It all started when the PHS students were about to begin their afternoon music rehearsal at the Interlochen Bowl.

Pioneer Director of Bands David Leach took the podium to set-up his scores and put the seating announcements in order when Lady Antebellum’s keyboardist and music director, Jonathon Long, walked up to introduce himself and a few other members of the band.

Long then explained that he had brass parts written out for one of their songs and asked: “Would some of your kids like to perform on stage with us tonight?”

Leach’s response was an immediate and hearty: “Heck yes!”

He considered the five players he knew were all good readers and could handle the added responsibility and recruited Vaughn Hajra, Georgia Zender, Ryo Morita, James Farmer, and Josh Weiner.

“Jonathon and I exchanged cell numbers and email addresses so he could forward me the parts,” says Leach. “At the conclusion of our rehearsal—part of which Jonathon attended— he was waiting with music in hand. One of our counselors—Max Housner—took the kids in a practice cabin to help the students prepare as I want on to Marching Drill rehearsal.”

At 4 p.m., Leach and the students met with Lady Antebellum to rehearse on stage.

“It was a thrill!” Leach recalls, adding that each student was provided with a backstage pass as well as a ticket to the concert.

“That evening the students and I met back stage to wait for their big entrance,” says Leach. “As members of Lady Antebellum passed the students each one gave the students a high five and a thumbs up!”

The rest, he says, is history. 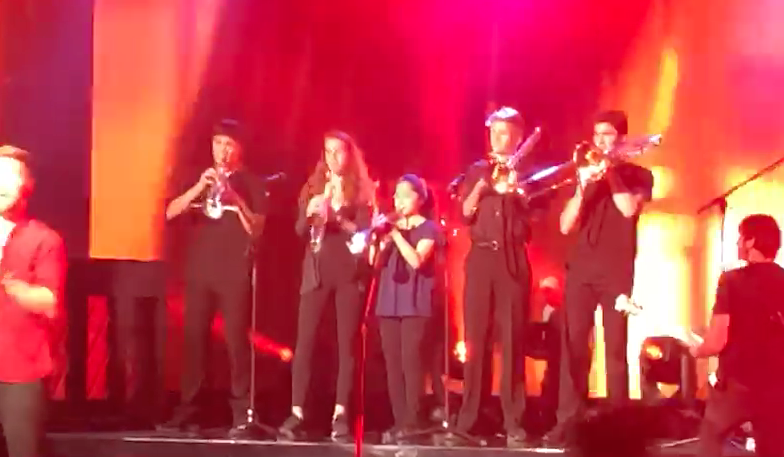