But the two are clearly on the same page. 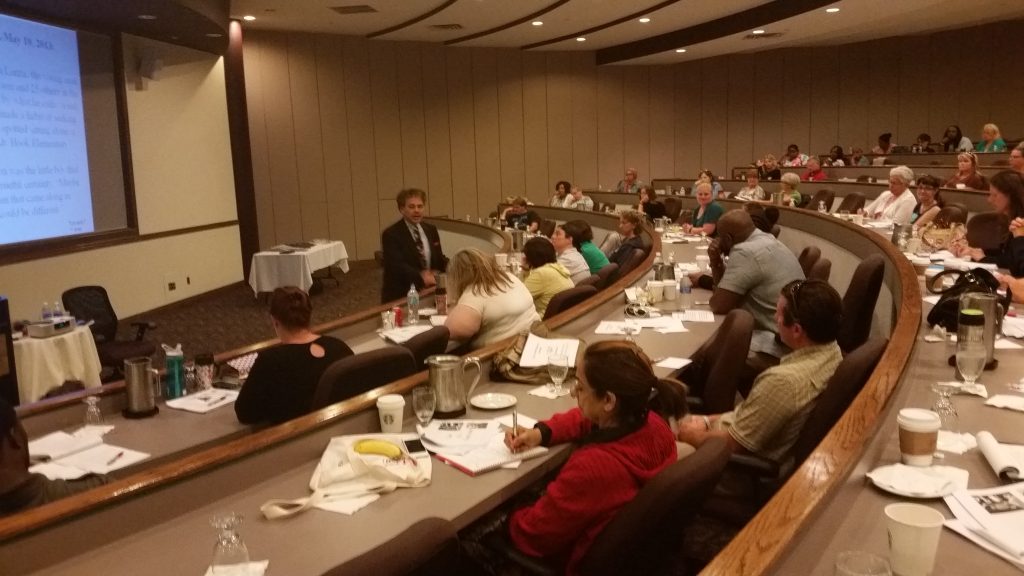 Two days after Swift spoke to building principals and other AAPS administrators about the importance of working together for the good of every student, Appelstein told the Student Intervention & Support Services community that there is no such thing as a bad kid; that kids succeed when the adults around them believe they can succeed – with no exceptions.

SISS Executive Director Elaine Brown said staff learned several strategies and interventions to support students who do not yet have the appropriate tools in their social emotional tool box to interact well with others.

Brown said that when Swift asks, “How are the children?” Appelstein’s strength-based principles and techniques will help ensure that more than ever, the answer is: “The children are great and living the dream.”

Appelstein, who has worked in child welfare for over 25 years and is president of Appelstein Training Resources, LLC in New Hampshire, talked about the three major parts of the human brain: logical, emotional and survival.

He noted that children traumatized by neglect and abuse overuse more primitive brain systems, and that their survival brains are chronically stimulated, and they are at high risk of behavior harmful to themselves and others.

Teachers should stop worrying about saying the perfect things all the time, he said.

Kids need to know their teachers believe in them. He said that 20 years from now, students won’t remember much of what you aid to them.

“But they’ll all remember how you made them feel,” he said.

Appelstein said that to be successful as a parent or a professional, you have to be a great actor and a great liar.

“Anybody think this job is about being honest every day, raise your hand,” he said. “You lie through your teeth all the time!”

Showing a slide of Tom Brady, the New England Patriots fan said, “I love him!”

Appelstein told a true story about a “hellatious” fourth grade class that no teacher could handle.

Two teachers quit in September they were so horrible.

In October, he hired a teacher with no experience, without telling her the class was the most difficult in the history of the school.

The entire staff was worried she wouldn’t last a day “with those monsters.”

Four weeks go by. Not only are there no problems, but the kids start showing up on time and more often.

After two months, when the staff thought she must be doing something illegal in that room to keep the kids from getting in trouble, the principal went into investigate.

That’s when the teacher said, “I want to thank you for what you did on my first day of teaching!”

The principal couldn’t image what she meant.

“You knew I’d be nervous and anxious, having never really taught in a big school before,” she said. “So what did you do that first day? You came into my room before the students arrived, you went up to my desk, and took out a big piece of paper. On that piece of paper you wrote down the name of every child, and next to it, their IQ.”

“My very first class, and you gave me the honor students!” she said, thanking him for trusting her with the best and the brightest.

The principal looked at the young teacher and said: “Those were their locker numbers.”

It’s all about attitude, he said. 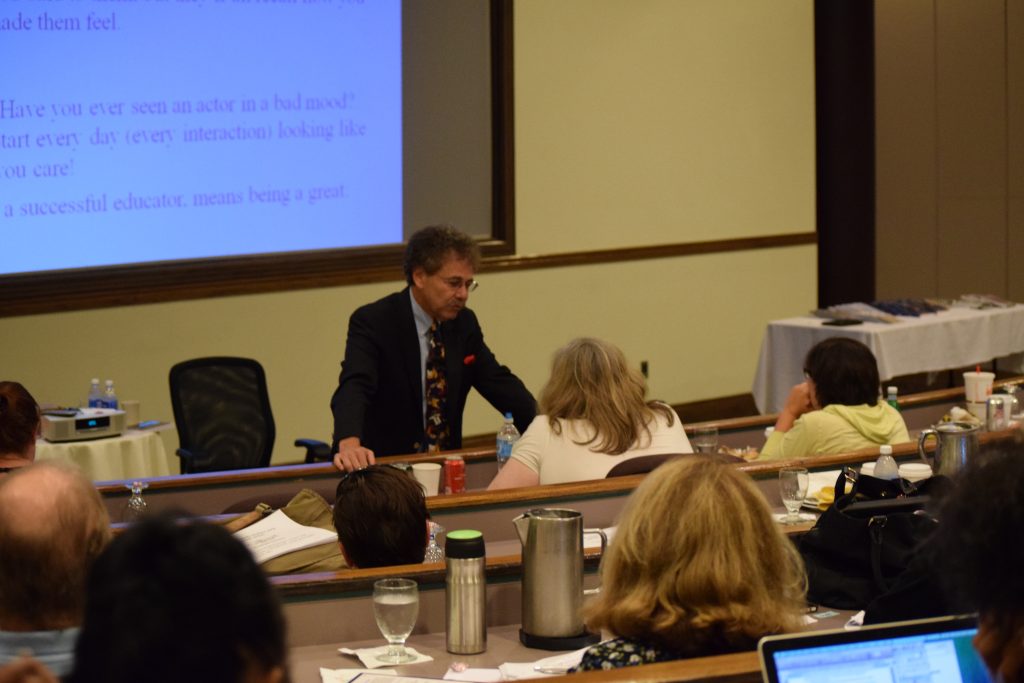 Appelstein stressed the importance of keeping cohesion among the educational community, and said there are probably fractions in every school in the world.

He said that when his own daughter had a “really mean” teacher in third grade, they identified the problem, and then consistently took steps to make sure they all got along.

The goal is to make sure there is no split in a relationship, he said, adding that instead of calling someone a derogatory term, just say, “He’s a good guy. Everybody comes from a different place.”

“One of the worst things you can do, whether you’re a parent, teacher or administrator, is to foster a split,” said Appelstein. “Never say anything negative about someone you’re working with or dealing with.”

He said there’s a scene in the movie, “Stand and Deliver” when a teacher says he wants to teach calculus the next year.

The idea is shot down. “Our kids can’t handle calculus.”

When he shows the clip to audiences, everyone always praises the teacher for having faith in the kids,

“It makes me sick what I see in that clip!” he said.

He said the teacher should have brought the idea to the department chair first, not a general staff meeting.

“You have to go through the stages, or otherwise you create splits,” he said.

Brown said that throughout the day-long retreat, educators were constantly reminded of the power of relationships and the importance of supporting students’ to have high self-esteem.

As participants examined the reality of what a student with social emotional challenges may look like or think about, they faced their own reality of how staff/adults must change their mind sets to engage students so that they are encouraged to make changes in their behavior and make appropriate choices, she said.

“The possibility of change is there for every student,” said Brown. “Everyone in AAPS should have the opportunity to experience Charlie Appelstein so everyone can have the same language to take the journey into changing the way we support the social emotional needs of our students.

Lakewood Elementary Principal Michelle Seals said she was impressed with Appelstein’s insistence that there is hope for every child.

“He talked about how when children don’t have hope, their brain chemistry shuts down,” she said. “When a child has hope, all things are possible.”

Seals said that more than ever now, she is eager to welcome every student back to school.

Marci Harris, Slauson Middle School’s world languages department chair, said that Appelstein was one of the best professional development experiences she has attended in AAPS.

“I will remember many, many things from today,” she said at the end of the one-day retreat held at the Eagle Crest Convention Center.

She said the ideas that stuck with her most include:

Harris agreed that his message aligned with Swift’s earlier in the week, when the superintendent told district leaders that school must be a safe place for all students and staff without exception.

“We must deepen a determination to keep the focus on teaching and learning, meeting the needs of all our students; every day, every child,“ Swift said. “And we must support our parents and our community in understanding how best to support their children. “

Each participant at the Appelstein conference was given a bracelet from SISS to reinforce that message. Brown said the hope is that the inscribed bracelets will remind teachers to “Commit to Excellence.”