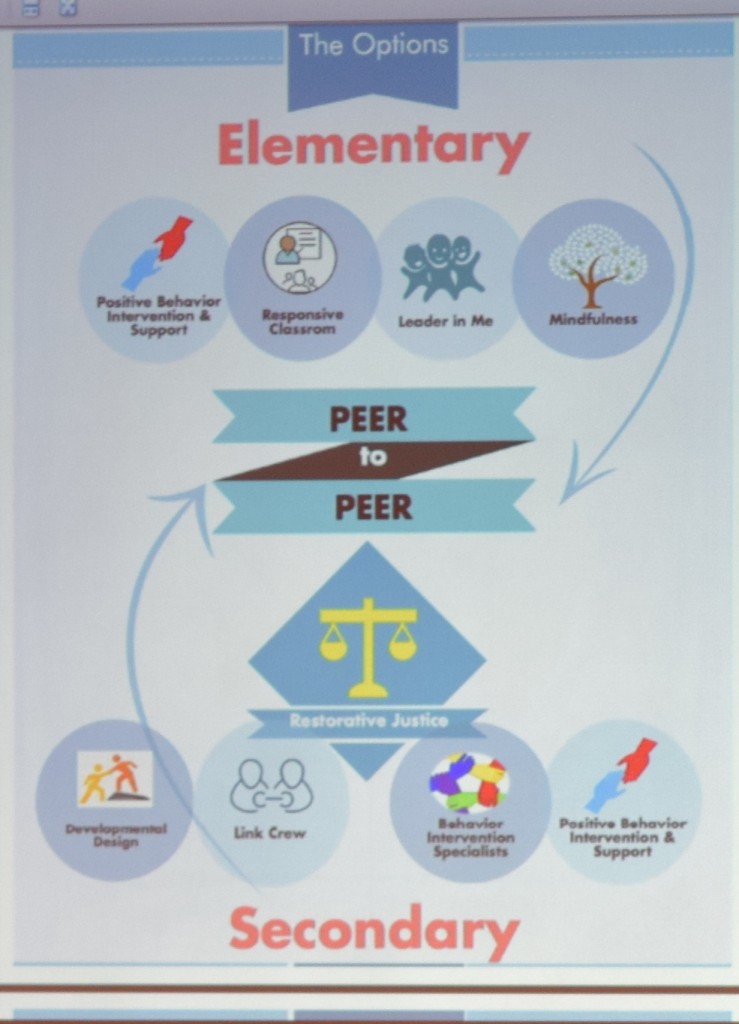 Suspensions continue to decline for all groups of students in the Ann Arbor Public Schools. That’s the big take-away from the Annual Student Conduct Report shared with the Board of Education this week. Superintendent Jeanice Swift says the report illustrates the positive impacts from all the efforts the district has made over the last several years.

When comparing the 2010-11 school year to 2014-15, the number of high school students that were suspended at least once is down 48 percent. At the middle school level that reduction is 75 percent, and a 74 percent reduction for elementary school students.

The trend of lower suspension numbers continues when looking at the four categories of students that have the highest suspension rates.   Fewer African-American students, special education students, economically disadvantaged students, and boys at both the high school and middle school levels are being suspended.

While AAPS has successfully reduced suspensions across the board, Swift says work remains to be done. That’s because the percentage of African-Americans, special education, economically disadvantaged, and male students that have been suspended remain higher than overall student suspension rates. She believes keeping students in the classroom is a critically important step for the district in efforts to close achievement gaps.

For School Board member Andy Thomas the 75 percent reduction in middle school students that have been suspended at least one time is especially important. “Middle school holds an important role in the arc of a student’s performance,” Thomas says. “These are still very young students at middle school age, 12, 13, 14 years old. These are not young adults, at that point they are still children.”

Swift credits work started by former Superintendent Pat Green for the suspension reductions. The district is now offering more tools to change student behavior before turning to suspensions. Programs like Leader in Me, Responsive Classroom, Link-Crew, Behavior Intervention Specialists and Positive Behavior Intervention and Support are some of options AAPS buildings are using to improve student conduct. By having a variety of tools available, each principal can choose the program or programs they feel will work best for their particular building’s culture.

Initially School Board member Simone Lightfoot had concerns that the district didn’t have a uniform approach to reducing suspensions, but has since come around to support giving different buildings more choices. “Once I saw the work, all the moving parts, I’ve come to appreciate the options,” Lightfoot says. She’s also excited that many of the programs are serving as resume builders for students who get to take leadership roles as they work with younger students and special needs students.

While a variety of programs are being used across the district to improve student conduct and reduce the need of suspensions, there is one area that greater efforts at being consistent is helping. “There has been in the past a concern and a perception, probably an accurate perception that a particular behavior on the part of a student belonging to one group would result in a suspension whereas a similar behavior by another student in a different group would result in some lesser form of discipline,” says Thomas. “So consistency in applying discipline I think is a huge part of this.”

School Board member Susan Baskett is excited to hear the district is focusing on relationship building as a way to reduce the number of suspensions that in the past have been issued for insubordination. “So glad that you recognize that and that we as a district are working on the adult side of it. It’s one thing to say parents have to work at home with the kids, but the adults also have to work on the relationship building,” Baskett says.

Read more about some of the programs that are helping improve student conduct without using suspensions here.