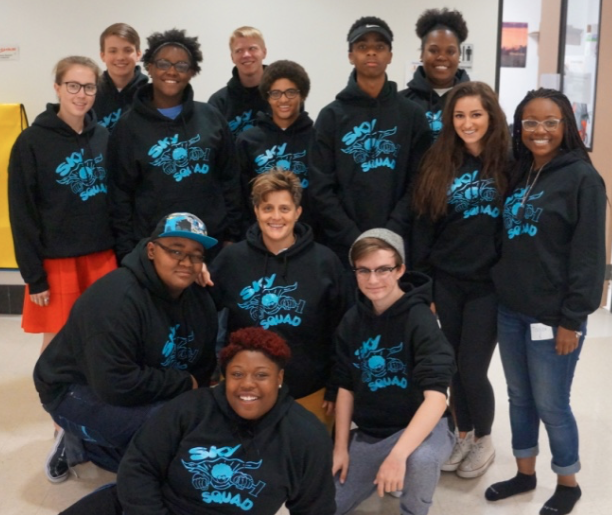 When the Skyline Anti-Bullying Club revives its once-monthly meetings in the coming days, it will be just one in many initiatives that school administrators, teachers and students have undertaken to face the issue of bullying head-on.

Skyline junior Brynne Bolick, 17, has volunteered to lead the jump-started Anti-Bullying Club, which had lain dormant for the first few months of the school year after the student leader of last year’s group graduated. There are several Skyline groups and norms that make up a culture conducive to promote anti-bullying, but Bolick saw a further need and asked Anti-Bullying Club Sponsor Cheryl Haller – Skyline’s College and Career Advisor – if she could get the club started again.

“At our age, we have a lot to deal with anyway, and if you add bullying on top of it, it can lead to some terrible things – depression, suicide, these are real dangers. And, if we can catch bullying problems before they become huge issues, then that’s what we’re trying to do.”

Haller didn’t hesitate when Bolick volunteered to lead the Anti-Bullying Club. Skyline promotes a zero-tolerance policy when it comes to bullying, and any student support in that regard is welcome.

“The culture of a building can be set, a norm can be established, by the students who are not being bullied,” Haller said. “If they step up, speak out against it and make it clear that it won’t be tolerated in their school, then that’s a huge step toward reducing the problem.”

Bolick (photo insert left) won’t be alone in leading the Anti-Bullying Club. She’ll have a strong supporter and co-leader in Liz Moore, a 17-year-old junior at Skyline. Moore was a victim of bullying two years ago, so she knows how important it is to deal with the issue.

“It can have a very negative effect on a kid,” Moore said. “You feel alone, isolated, if you feel like there’s no one to turn to. That’s why groups like the Anti-Bullying Club are so important.”

Moore feels so strongly about the issue that she has formed a non-profit group called #StepOut – not affiliated with Skyline — that deals with bullying. She hopes to bring together kids who have bullied and those have been bullied, and have them work together in various activities and volunteering excursions.

Besides the Anti-Bullying Club, there are other steps at Skyline already in place. For instance, Sky Squad is component of the Restorative Justice Program that is student-led, but involves counselors getting involved when bullying is witnessed or reported.

It is different than the Anti-Bullying Club in that it deals directly with a specific bullying issue and is in the business of immediate resolution – often by a counselor.

“It brings partners together in a tribal component,” Haller said. “The idea is to bring everybody back into the tribe – both the bully and the one who’s being bullied. It’s important to understand that you can’t shun the bully either.”

There are six community assistants throughout the building at Skyline. These are adult employees who monitor the hallways, looking for situations that need attention. Bullying isn’t their sole focus, but it is among the things they look for. Haller herself is a former community assistant, and she understands first-hand the role of relationship-builder a community assistant can play. This, in addition to providing safety and security.

There also is Skytime, a quasi-homeroom atmosphere that offers non-academic topics. Each year, one of the Skytime topics centers on bullying.

“This year, one of the Skytime topics was on empathy, which is important when dealing with bullying,” Haller said. “If we educate the students on the importance of caring for one another, that’s a big step.”

There are other programs at Skyline that either directly or indirectly can reduce bullying. For instance, Link Crew Members connect upper classmen with incoming freshmen. The more experienced students show the newcomers around the school, offering them help. And there is the Peer Connections Program, which is another way to bond students who have varying issues.

“It’s about bringing kids together any way we can,” Haller said. “Bullying can just destroy a kid. We aim to set up a culture that can prevent that.”