Most elementary schools have a logo. No big deal.

But somehow it’s fitting that A2STEAM at Northside—a school that focuses on science, technology, engineering, the arts and mathematics—would boast a logo designed by one of its students.

Sixth grader Matthew Y. is the creator of the new logo which was unveiled Thursday night at the school’s first Fall Expo, “Catalyst: The Spark.”

“It’s cool!” said Matthew, whose winning design started out as a doodle in his notebook that he photographed and sent to his teacher. “It will represent our school, and be on T-shirts. It’ll be my logo on the outside of the building. Cool!”

Art and Design teacher Rachael Van Dyke led the K-6th grade students through the logo design process, and had them evaluate STEAM and STEM logos across the country.

Students them developed their own logos, and each class voted on the top two before the A2STEAM staff narrowed those down to three finalists: Second grader Moses S; fifth grader Leo K., and Matthew. The three finalists collaborated with an A2STEAM teacher to create a professional logo.

Those three logos, along with three teacher-designed logos, were placed on a voting ballot and the 400 students at the new STEAM school voted for their favorites.

Principal Joan Fitzgibbon said she is thrilled that the students participated in the logo design process, and that they all had the opportunity to vote.

“Part of the STEAM theme is about participation in real-world experiences,” she said, “which I believe we satisfied in this project-based logo design process.” 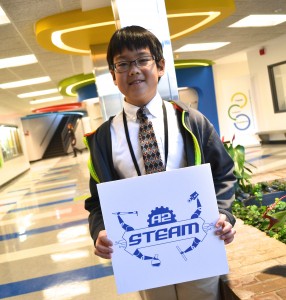