The event featured the annual student talent show; which showcased the art, music, dance, and performance works from students from all of Washtenaw County school districts.

NAAPID, or National African American Parent Involvement Day, was founded in 1995 to urge African-American parents to celebrate the success of their children in education, and to highlight the achievement gap of African-American students in the nation.

“NAAPID is a national call of action to get all parents in general – and African-American parents in particular – to be more involved in their children’s education,” said Event Chairwoman Shoshana DeMaria. “NAAPID was really designed to address the serious achievement gap that faces African Americans, but realistically, all cultures could fall through the cracks.”

NAAPID allows parents to accompany their children to class during the second Monday every February during which Black History Month in celebrated. NAAPID has grown to 47 states and internationally as well – flourishing around the globe in countries such as Japan, Canada, the Bahamas, Puerto Rico, and the Virgin Islands.

According to DeMaria, this year marked the 15th anniversary since the organization was created. 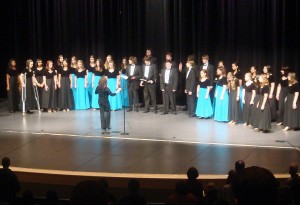 “NAAPID at Night,” however, has more recent roots, according to NAAPID Committee Member Danah Greer. “NAAPID at Night was founded six years ago for parents who couldn’t be at NAAPID [with their children] during the day because of work or other commitments. So, they come at night.” Greer said. “The whole event is countywide, with students coming from as far away as Milan to participate.”

DeMaria adds, “Our committee welcomed this opportunity. ‘NAAPID at Night’ was designed as a response to parents who did not have the flexibility to leave work during the days to visit their children in school.”

The Skyline High School cafeteria blossomed into an area abuzz with the mingling of parents, students, and staff members. Reception music was performed by the Skyline High String Quartet and refreshments were served by student volunteers.

Joi, a Scarlett Middle School student, has been participating in NAAPID every year since the first grade. She said “NAAPID is fun because you get to meet new people and see the performances – and the performances are usually really cool. I’m most excited tonight to see the different performances in the show – especially step dance, that’s my favorite.”

Meanwhile, other guests explored the featured NAAPID poster contest winners. The poster contest, held annually, was an effort made by the NAAPID committee to create more student involvement in the organization. “Students have to be involved in all aspects – totally involved – in NAAPID,” DeMaria said. “We thought, ‘what should we include in NAAPID at Night’ to present all student talent?’ And, the poster contest was born, open to all schools.”

The poster contest was established, in part, to promote awareness of NAAPID, as the winning posters will be used to advertise the “NAAPID at Night 2011″ event. Entries from all Washtenaw school districts were considered by age division – from kindergarten to high school; with six winners in total.

Winners received educational savings bonds of values up to $200.

Skyline High School students served as ushers for the event, and nearly all displayed their excitement of the show. “I really didn’t expect so many people to be here tonight. I think it’s really cool so many people showed up,” said Skyline freshman Kaavya Puttagunta. “They have good food, and the show was really great. The variety of talent was amazing.”

Additionally, closing remarks were made by Joseph Dulin, the founder of NAAPID.

DeMaria reflects on this year’s event as having been “beautifully done. It was a huge success,” she said. “The setting was right. Skyline is architecturally designed for that type of event and everyone was happy to be there.”

As for “NAAPID at Night 2011,” DeMaria expresses hopes for even more student involvement.

If established, student participation would consist of two or more high school student representatives from each school. DeMaria would also like to “incorporate two additional schools to the “NAAPID at Night” event,” she says, “Chelsea, Dexter, Manchester and Whitmore Lake have not yet been a part of NAAPID, so I would love to see them join. I have no doubt that next year two of the four or maybe all four of these schools will be participating.”

The 2011 event will be hosted by Saline High School.

Carlina Duan is the News Editor of The Optimist, Pioneer High School’s student newspaper. She also reports and writes for the AAPSNews.

A series of briefs from in and around the Ann Arbor Public Schools including: Reading month activities at Pittsfield, CHS teams participate in mock trial competition, Lakewood hosts major fundraiser event, robotics at Skyline, WISD moves forward on superintendent search and hosts event about IEP goals. […]

Congratulations to all of the graduates in the Ann Arbor Public Schools Class of 2013! The slideshow includes photos of the five graduation ceremonies that took place June 3-10, 2013. […]