Skyline High School is different. Its building is green and environmentally friendly. It’s programs include academic magnets and student “neighborhoods” that are called small learning communities. It opened in fall 2008 with just one grade, allowing the school to grow in a unique way.

“Our goal is to create a model high school,” she added. “When we were doing our research for Skyline, this we couldn’t find one in Michigan.”

The school is on trimesters and uses a “mastery” approach to teaching and learning. If students do not reach an 80 percent level of mastery of an objective, it is retaught and students are given another opportunity. Teachers work together in interdisciplinary teams from different subject areas – different from the traditional approach where teachers work in departments only, such as math, science and language arts, Jackson said.

“Here (at Skyline,) we put our egos aside,” she added.

Skyline is also the only one of the district’s three main high schools to offer open enrollment; about 125 students are accepted through the open enrollment process each year, Jackson said. Because of that, the school represents a cross section of the city. “We represent all areas of Ann Arbor,” she said.

‘Here (at Skyline,) we put our egos aside.’ – Principal Sulura Jackson

Jackson noted that the inaugural classes of students have unique opportunities. These underclassmen get to take on leadership roles in areas such as athletics, yearbook, music, theater and student government. These programs would normally be reserved for juniors and seniors.

Those who work at Skyline believe their approach will help students develop according to the schools motto: “Agile Minds, Big Hearts, Deep Questions.”

In Kathe Blue Hetter’s (ACIS 2 Accelerated Integrated Science) physics class, sophomores on a recent day were learning about lasers, colors, lights and prisms. Following a few discussion questions, teams moved to lab tables where they worked together on various experiments and conclusions.


Hetter came to Skyline after teaching at Community High School for 14 years and was part of the team that developed the new program. She said she was excited about what a new school would offer to students and was drawn to creating a new approach to learning, even with added state requirements. “It was a whole clean slate to start with,” she said. “We made the (state) standards work for us. They didn’t control us.”

Hetter said she likes the focus on student progress. “It all comes down to what’s best and what works for kids,” she said. “We all have to remember that it’s a work in progress.”

Skyline’s four magnet programs have been a draw for many students. The school offers magnets in Business, Marketing and Information Technology; Communication, Media and Public Policy; Design Technology and Environmental Planning; and Health and Medicine.

One ACIS 2 physics student, sophomore Jeffrey Robbins, said he was disappointed not to be picked via lottery for the health and medicine magnet at Skyline. He said as an athlete, he is interested in pursuing a health career, possibly in physical therapy and he thinks there should be a different way to select students, such as GPA. “But I can take the classes as electives. I might as well try them all and see what I like,” he said.

Fellow sophomore Patrick Conway is in the design magnet. It was one of the reasons he came to Skyline, he said. He plans to pursue a career based on science and chemistry or engineering. “I like it,” said Conway. “There’s a lot of hands-on. You get to build,” he said.

Sara Duvall, lead teacher for media and technology, was also one of the core teachers who helped to design the Skyline program. “The Skyline thing caught me,” she said, adding that the school was set up with an entrepreneurial focus. “We should be leading our profession,” she said. “We have to be cutting edge, pushing ourselves hard.”

Duvall said the school’s approach is to “assure goodwill” in relationships be they with students, staff or the parent community. “At this school, you have to set your ego over here,” she said. “It’s not about you, it’s about the student.”

Jackson said Skyline was designed to allow lots of natural light to come in, which offers a healthier environment. “It keeps us all connected,” the principal said. “We hear, we see things through multiple floors.”

Students spend much of their day in core classes that are conducted in their small learning community, or neighborhood. Jackson said these four neighborhoods help students and teachers stay connected and don’t allow students to get lost in the maze of a large school. “You don’t get to hide here,” she added.

“It is the largest silver-certified high school in the country,” said Randy Trent, the district’s executive director for physical properties.

Trent said the open approach and green properties used to construct Skyline has been great. “The magnets and classrooms are functioning the way it was meant to be,” he said. 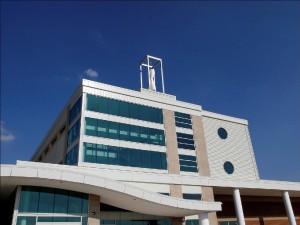 Skyline sits on a 109-acre parcel that is about 60 percent developed. The undeveloped portion of the property is encouraging student study as well as partnerships with the city of Ann Arbor and the University of Michigan studying animal habitats on site, Trent said.

“As the program with the number of students grows, the knowledge of the whole building will expand,” he said. “The more that it’s used, the awareness will spread more and more.”

Trent said the building is 42 percent more efficient than a standard building. It uses a geo-exchange system for heating and cooling, a storm water system that captures runoff to use for irrigating athletic fields and landscaping and has sensors for lights and heating that adjust depending on how spaces are being used. Floors are made from recycled rubber, which cuts down on noise.

On another green note, Skyline will soon be offering the first Sustainable/Green Chemistry course in the state of Michigan, something Hetter said she is looking forward to. She said it ties in nicely with the school’s green approach to operating and teaching.

Skyline operates as more than a high school. Trent explained that it was designed to be used by the community and rented out by other groups as well, bringing revenue to the district. Its location with easy access off of M-14 has drawn several large groups to rent it for events.

A 100-member Michigan School Business Officials meeting met at the school recently as well as a regional entrepreneurs convention. A state and national robotics event is scheduled in April and other groups are being courted for events this summer.

Skyline’s unique approach is an asset to the Ann Arbor area, Jackson said. “The addition of Skyline gives Ann Arbor Public Schools the competitive edge it’s going to need,” she said. Next year, athletics at Skyline will be 100 percent in place, music ensembles will be offered and the school will start to come into its own, she added.

A series of briefs including: Pioneer Theatre Guild does “Hairspray;” student numbers up this fall; Community High raises dollars for Food Gatherers. […]

Ready or not, here comes a summer of fun at Rec & Ed camps

The popular Green Adventures Camp is being offered for a third year in The Ann Arbor Public Schools. Its offerings are among 200 being offered by the district’s Rec & Ed Department this summer season. […]

WITH VIDEO: Seven schools are taking part in the ThinkStretch summer learning program this year. The programs are funded through PTOs and the AAPS Educational Foundation. […]