Program enhancements are coming next year to all Ann Arbor Public Schools under the plan the Board of Education discussed at this week’s study session. Superintendent Jeanice Swift says the theme this year is to bring improvements to every classroom in the district.

The enhancements include expanding world language options and implementing Project Lead the Way in all middle schools, high schools, and five elementary schools. These efforts are an expansion of initiatives started last year in targeted buildings that had capacity for student enrollment.

Board President Deb Mexicotte says it’s always been the goal to add educational options district-wide. “There’s always been this plan to make sure that we had as broad a reach in terms of these enhancements for our students so that no student is left behind when it comes to having great educational choices, opportunities, and these kinds of enhancements in their own neighborhood schools,” Mexicotte says. 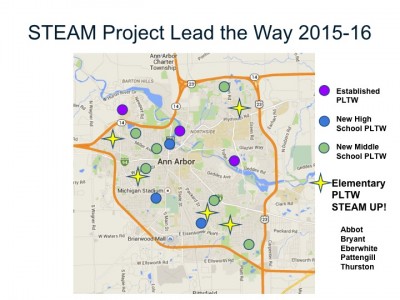 The expansion of Project Lead the Way is designed to offer additional science, technology, engineering, arts, and math or STEAM classes in schools throughout the district.

The improvements will include Gateway to Technology courses for sixth grade students. Additional Project Lead the Way classes will be offered as electives for seventh and eighth grade students.

Project Lead the Way will also bring STEAM offerings to Abbot, Bryant, Eberwhite, Pattengill, and Thurston Elementary Schools. Swift says these schools were chosen to create coverage across the district and in buildings that have space for additional students. “We are really STEAMed up in 2015-16,” Swift says.

The World Language enhancements are being targeted for schools to create corridors where specific languages will be offered. These include Arabic, Chinese, and American Sign Language. Swift says ideally the district would offer every language in every building, but using this corridor approach gives the best coverage at this time. “This is just the first emerging phase of a feeder pattern,” Swift says. 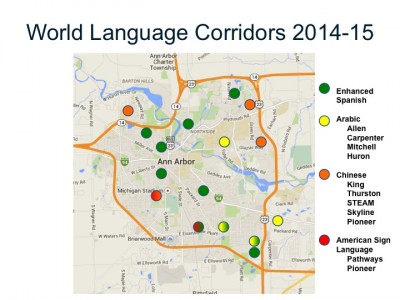 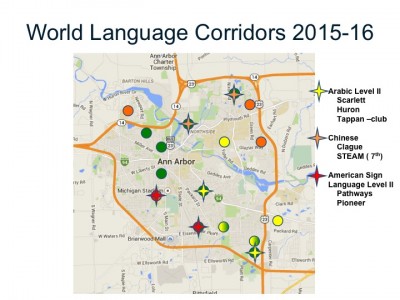 According to Mexicotte, the expansion of STEAM and language programs are a result of community requests.

“No question the initial round of enhancements came directly from the community through the Listen and Learn Tour and reinforced by the Board,” Mexicotte says.

The discussion of enhancements is part of the process of developing a budget for the 2015-16 school year.

A budget that’s not going to include teacher lay offs, increases in class size, or additional cuts in transportation, performing arts, electives, or athletics.

“We have stabilized the district and have very conservatively budgeted for another 100 students next year when we know last year we were able to net about 350 extra students,” she says. “Now we know that can’t go on forever, however we do know that by stabilizing this year we have the opportunity to grow into, at least the next few years and beyond, as it relates to these kinds of enhancements.”

In addition to these program enhancements, the district plans to offer several other improvements next fall. Thanks to the technology bond, every classroom will have document cameras. The tech bond is also providing funds for additional mobile technology, such as new laptops and iPads. The district also will reopen middle school pools.

Mexicotte says overall these improvements are designed to maintain the district’s educational quality and give students and families more choices.

“A refocusing on educational innovation, we’ve always had excellence thanks to our teaching staff, and now are expanding to allow more and more paths to success,” Mexicotte says.