Trombonist Max Hully, a Community High School Advanced Combo member and a Pioneer High School Jazz Band member, was recently selected as “outstanding” at the University of Michigan Jazz Festival. Though a non-competitive event, the faculty did ask Hully and two other outstanding high school soloists to play with the U-M Jazz Ensemble in the evening concert, said Jack Wagner, jazz program director at Community.

“Making the occasion even more special was the last-minute announcement that the guest bassist Christian McBride was going to play with the kids onstage at the Power Center,” Wagner said. “McBride is inarguably one of the top three upright bass stars in jazz today. It was a real thrill for Max and all of our kids.

“The whole day was wonderfully inspiring, and our three combos that attended played beautifully in the workshops. The students got to rub shoulders with a lot of big folks in the business, and learned a ton.” 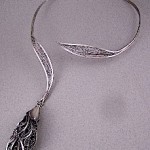 Monroe will receive $500 worth of jewelry supplies and a trip to Las Vegas to accept the award. A poster will also be made featuring her and her jewelry piece that will be included in Rio Grande’s catalog. Pieces are judged on the innovation and uniqueness of the design and the quality of workmanship. Pictured here is Monroe’s jewelry design and work.

Two Ann Arbor Public Schools employees were recent recipients of the district’s Celebration of Excellence awards. The awards are sponsored by the Ann Arbor Board of Education and the PTO Council. Both Patrick Dombrowski and Beth Bernacki received awards at the March 10 school board meeting.

He has been called an “invaluable” member of his school team who works with the students in both self-contained classrooms and in general education to support inclusion experiences. Acccording to his nomination, Dombrowski “easily makes adaptations/modifications to help our students participate and interact with general education peers.  In the process of including our students, he forms relationships with the peers.”

Known as “Mr. D.,” Dombrowski is dedicated to students with disabilities and outside of his time in the district works with adults with disabilities.  He helps students achieve their potential and encourages them to be independent using a calm and quiet approach.

Bernacki, a history teacher at Skyline High School,  was nominated for an Outstanding Customer Service by Katy LaCroix, a fourth-grade teacher at Logan Elementary School.

“While Beth happens to be my sister and best friend, I am nominating her because of her diligence and dedication to her work,” LaCroix said in her nomination.  “… There is no limit to the amount of time that she puts into her role as a teacher. … Beth is the epitome of a teacher that goes “above and beyond” her calling.”

‘Read to Feed’ under way at Allen Elementary

At Allen Elementary, students and families are encouraged to give back through this year’s theme “Read to Feed”  as part of March is Reading Month.

Four teams will compete to record the most minutes read with the final goal being 100,000 minutes for the entire school, according to information from the school’s Web site. The reward for the school will be to support Heifer International and purchase a heifer.  This nonprofit provides families in need with a cow to provide milk and income, helping families to become self-sufficient.

To this end, classrooms are divided into reading cow teams  to promote a healthy competition. A visual display of the progress the cows are making toward the reading goal  will be on display in the school’s front hall. The school will celebrate on March 26 with a “Milk and Cookie” party. The Allen Parent Council contributed $250, allowing them to purchase the heifer.

The Ann Arbor Public Schools has four Presidential Scholar candidates for 2010 and all are from Pioneer High School, according to information from Superintendent Todd Robert’s office. They include: Spencer O. Johnson, Daniel J. Kriz, Leah A. Latterner and Jacob C. Postema.

The Presidential Scholars Program was established in 1964 by Presidential Executive Order  to recognize and honor some of our nation’s most distinguished graduating seniors. Scholars are chosen on the basis of their accomplishments in many areas – academic and artistic success, leadership and involvement in school and the community – and represent excellence in education. The 2010 Presidential Scholars will be announced in June.

The 11-question online survey will remain open until March 18. Those taking the survey can remain anonymous, but those that provide an e-mail address will be entered in a drawing to win a $100 gift certrificate to the Chop House.

“As you probably know, the Ann Arbor Public Schools need to reduce their budget by $20 million for the 2010/2011 academic year,” said AAPSEF Executive Director Wendy Correll in a recent e-mail notification about the survey.  Your input is very valuable in helping the board of directors to determine areas of funding.  We will also seek input from AAPS administrators and staff.”

Here is the link to the survey
http://survey.constantcontact.com/survey/a07e2qb7g3lg5nxr4zn/start

The crop provides space for scrapbookers to spread out materials for the day. Registration includes an individual table, scrapbook supplies, a catered lunch and an opportunity to make some progress on projects while connecting with friends.  The event is planned for March 20, from 9 a.m. to 4 p.m. at Pittsfield Elementary. Registration is $45 per person, or $40 each if signing up with a friend or friends.

There will be three demonstrators – all seasoned scrapbookers – onsite to assist those attending. Cricut machines will be available to use and more than $500 of stamping and scrapbooking products are up for raffle. Pittsfield Elementary is looking to host the event annually, Farnham said.

Haisley collects a ton  – of shoes – for Haiti

The staff of Ann Arbor’s Haisley Elementary School discovered an opportunity to teach children about the power of giving by supporting an event that collected 1,704 pairs of gently worn shoes – weighing nearly one ton – to be sent to the Haitian people.

“We were thrilled at the overwhelming response we received from local residents and school children,” said Mike Bell, who co-owns Foot Solutions Ann Arbor with his wife, Dana. The local store collected the shoes for Soles4Souls, a Haitian relief agency, and worked with the Haisley community in the effort. The shoes are shipped to the charity’s distribution center, then sorted and delivered to the Haitian people.

The Bells plan to continue the collection of gently used shoes. Donations may be dropped off at the Foot Solutions Ann Arbor store, 3780 Jackson Road. Details: 734.998.3668 or visit www.footsolutions.com/annarbor.

Angell Elementary School hosted its annual International Night on Feb. 4. Following are some photos shared by the Angell staff and parents from the event, one of the largest the school hosts during the school year.

Mitchell-Scarlett balanced calendar to be reconsidered for 2013-14

The calendar remains a future option, but officials want to try out programs in the K-8 partnership with the U-M School of Education before suggesting a change. The partnership program will launch this fall. […]

Board of Education announces two finalists in superintendent search

After two days of interviews, the Ann Arbor Public Schools Board of Education announced two finalists in the search for the next AAPS Superintendent. […]

Dozens of young kids could be seen sprinting over tires, jumping over walls and crawling under nets in a challenging half-mile obstacle course at Scarlett Middle School’s field one summer morning. And they were having the time of their lives. […]