The seventh annual event will feature student art and other projects and well as displays of student talent. Winners of the NAAPID Poster Contest also will be on display.

Displays may be tabletop or floor, and should be creative, attractively arranged, and free standing and should include the student and/or class name, grade level, teacher, school name and district. Transporting displays is the responsibility of the parent or school coordinator.

International Night is a longstanding tradition at Angell Elementary School. The multi-faceted, homegrown event is different year-to-year because up to 30 percent of the school’s families may change from one year to the next.

Angell PTO Council representative and PTO Council Chairwoman E. Martine Perreault calls the event is one of the “highlights of the academic year at Angell” and said many neighborhood families visit long after their children have grown and left the school.

Jan Mackenzie was recently lauded by her peers for her outstanding service to The Ann Arbor Public Schools. The Slauson Middle School counselor was nominated and received the school district’s first Celebration of Excellence award for the 2009-10 school year for her outstanding customer service.

She was nominated by teachers Toni Burton and JanaÈ Townsend, who stated in their nomination: “For Jan Mackenzie, offering the support and love that her students and colleagues need always comes first. Her work touches both students and adults in her building. She is never too busy to listen, smile, or cry with anyone who comes to her door.”

The nomination said that in handling tough situations in the district, Mackenzie demonstrates “care in a time of crisis.” She was honored by the Ann Arbor Board of Education.

Nominees for both innovation and customer service are considered for these awards, which are selected by a Celebration of Excellence committee. The award for innovation recognizes staff members who have demonstrated creative and innovative approaches to their jobs. The award for customer service celebrates those staffers who provide outstanding service to their customers.

Clague is located at 2616 Nixon Road, north of Plymouth Road and west of US-23 in Ann Arbor.

Rosenberg will speak about ” Free the Children: Inspiring Youth to Become Agents of Change!” She will discuss the Free the Children program and how it has helped students at Clague, Tappan and Scarlett middle schools make a difference, both in their local community and abroad. The program is part of Project Healthy Schools.

Free The Children is a network of children helping children through education, with more than one million youth involved in innovative education and development programs in 45 countries. 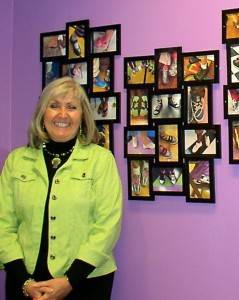 Eberwhite Elementary School Principal Debi Wagner shows off a wall in the school that has the title “One Small Step. The wall was designed and added this year using photos of student feet and shoes.

Wagner said the project was designed to encourage students and let them know that small efforts can lead to even bigger things.

Of the 40 competitions in which Michigan students can enter, the Huron Chapter placed first in 20 of those events that include both individual and team competitions. A list to recognize those students who won at BPA Regionals can be found on the Web.

On Jan. 19, two fifth-grade classes from Haisley Elementary attended Wayne State University’s Dr. Martin Luther King, Jr. Tribute at the Max M. Fisher Music Center. The keynote speaker was Dr. Benjamin Carson, a world-renowned neurosurgeon. Students were enthused to hear Dr. Carson’s story of growing up in a single parent home in Detroit, being challenged by poverty, poor grades, and other challenges.
A signed copy of Carson’s book “Gifted Hands” is now displayed in Haisley School’s Media Center. The trip was arranged by Cee-Jay Davisthrough his contacts at Wayne State University. Haisley students were the youngest to attend the event.

To kick off Logan Elementary School’s MLK Day assembly, “Pennies For People” was introduced to the Logan community to participate in a relief effort for Haiti. Special area teachers organized the event. By the end of the assembly, parents had donated more than $300. Students brought in pennies through the rest of the month with proceeds to be delivered to the American Red Cross.

News of note from around the district:

• Thirteen Bach Elementary School fifth-graders and four fourth-graders placed first in Michigan in the Knowledge Master Open on Jan. 20. The K.M.O. is a team academic contest that tests students’ ability to answer questions about all the school subjects. The Bach KMO Team scored 466 of a possible 1000 points. The average score in Michigan was 420 and the mean nationwide was 466. Nationally, Bach placed in the top half of all teams. Learn more about the KMO at www.greatauk.com.

• A team of 10 Forsythe sixth-graders scored in the top 20 percent in the Knowledge Master Open, placing fourth in Michigan among 17 teams. The Forsythe team scored 636 points of a possible 1,000. That was well above the state average score of 544. Coach Dan Ezekiel says that this is a good finish, and the team hopes to do even better next time. Ann Arbor’s Tappan team scored 587 and came in sixth in the state.

• Jane Nixon was named National High School Field Hockey Coach of the Year for 2010. She has been the head coach at Pioneer High School since 1990 and has won 16 state championships.
• Skyline High School teacher Jason Smith received a technology grant from the Technology Institute for Music Educators for a project to integrate technology into the music classroom. The mission of the group is to assist music educators in applying technology to improve teaching and learning in music.
• Karen Metzger, Logan Elemenary School art teacher, was selected as an “2010 Educators To Japan” participant. Karen will be in Japan from June 27 through July 8. She said she is excited about the impact this culturally rich opportunity will have on her K-5 art classes.

• Pioneer Band students received 111 first division and 23 second division ratings in SOLO competition, as well as 119 first division and 18 second division ratings in ENSEMBLE competition on January 16 at Livonia Franklin High School. Students throughout the state performed in this state qualifying event. The following Pioneer High School Band students participated in the Michigan School Band and Orchestra Association District Solo and Ensemble Festival on January 16. Students prepared a solo and/or an ensemble and performed for an MSBOA Certified Adjudicator. Their performance was evaluated and a rating between “I” (Excellent) and “V” was assigned. The symbol (2) after a students name indicates that they had two events receiving that rating in the same category.

As you go up the stairs to see the exhibit, what you’ll likely notice first is a huge, 10-foot tall tree.The decoupaged tree is a three-school project, showing art from Bryant Elementary second graders, King Elementary fourth graders, and Pattengill fourth graders. […]

By Tara Cavanaugh, AAPS News Service A few times a year, libraries clean out their inventories and get rid of excess books. But those books aren’t just tossed into the trash. Instead, materials at the […]

You can help a special needs student win an adaptive bike that’s perfectly suited to his needs. […]