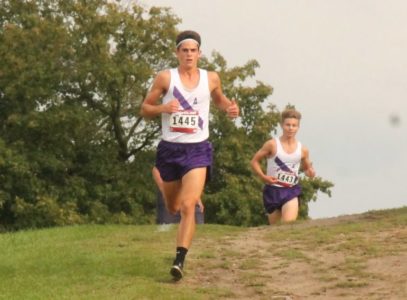 By Terry Jacoby/weloveannarbor.com
Pioneer’s John Florence paid a teammate one of the best compliments you can when it comes to cross country. Earlier in the year, the senior runner said of teammate Nick Foster: “You can only run with him for as far as he will let you,” said Florence, himself one of the best runners in the state.
But Foster is at a completely different pace when it comes to cross country as he chases his second individual state title during his senior year at Pioneer High School.
Foster went 15:16.1 to finish first at last year’s state finals to lead the Pioneers to a Division 1 state championship title. Pioneer finished with 107 points, three points better than Plymouth. Foster outkicked rival Cole Johnson of Rockford, who finished in 15:18.2. Johnson graduated but White Lake Lakeland’s Harrison Grzymkowski (third, 15:18.4) and Plymouth’s Carter Solomon (fifth, 15:24.2) both return.

This year, Foster has returned to the starting line of dominating every race. He has taken first place in all of Pioneer’s seven races with his personal best time of 15:03.1 coming in the Jackson Invitational on Sept. 22. Since then he’s been on cruise control – if you consider 15:12.7 (his time on Friday) cruising.

Like for many great athletes, the season begins in the off-season. And for those rare athletes at the head of the class, that means training every day because there is always someone trying to catch you – not that Foster is hearing footsteps.

“We did some two a days and tried to get some long and consistent runs in,” Foster said. “I was a lot more consistent than I’ve ever been. I made sure I got out and ran every single day and ran the most miles I’ve ever run in the summer. I wasn’t focused too much on workouts but just on getting some solid runs in every day. It was my best summer of training.”

So how does Foster respond to winning a state title? By training the hardest he’s ever trained in the offseason. That can’t be good news for those trying to chase down the senior runner.

“I don’t really think much about winning the state title,” he said. “I wanted to come into this season with the same excitement I had last year.”

And part of the excitement centers around the team.

“I want to do everything I can so our team can repeat,” he says. “We have had some injuries this year so trying to get everyone healthy and get that excitement level back to where it was last year and go for it.”

Foster is not only the leader on the course this year but also a leader off it as well. It’s a role he is clearly enjoying and taking very seriously. He certainly has earned the respect of his teammates and has been giving back as a role model and leader for the younger runners.

“Obviously I want to lead by example,” he says. “We have some young guys on the team and John (Florence) and I are trying to show and tell them what it takes to win a state championship. We have to work together and run as a team. We are trying to emphasize the team aspect of the team and running your best not just to get a PR but for your team.”

Foster came into the SEC Jamboree earlier this month without any knowledge of the course. Of course, it didn’t matter to him as he won easily.

“It’s fun to run a new course,” he said. “But in a big meet, it helps to have run the course before.”

Foster’s bullseye is obviously the state finals at MLS at the end of the season. Right now the focus is taking the small steps to set him up for the big steps against the best runners in the state on the sport’s biggest “track.”

“I am just trying to compete at this stage and not really focused on a specific time,” he said. “I want to keep improving. I also like to try different things like running fast in the middle or going out stronger and trying to get a feel for how to best run a race. I don’t have that much experience in cross country so I’m always trying to find different ways to race for postseason events.”

As for college, Foster is still chasing a few big schools. At some point, one will cross the finish line as his winner for the next four years. It will certainly be a win-win decision.