News Ticker
Story, photos, and video by Jo Mathis/AAPS District News Editor
Poet and community activist Donté Clark, an Artist in Resident at the University of Michigan, will have spoken at four AAPS high schools by the end of next week.

“I hope they get inspired by some of his work,” said Wade, “and to think in terms of how they can achieve their goals maybe through poetry, the arts, through any other way to see how he has overcome many obstacles in his community to be the success he is today.

Molly Raynor, the new Literary Arts Program manager at the Neutral Zone, said she’s hoping to use a documentary featuring Clark to inspire local teens to get involved in NZ’s spoken word program and find another platform for their voices to be heard.

Raynor, a 2002 graduate of Pioneer, became involved with spoken word at the Neutral Zone when she was 15.
She says that because of her life-changing experience there, she moved to the San Francisco Bay area in 2007 and spent the last 10 years building a performing arts program called RAW Talent with her student-turned-teacher Donté Clark.
A documentary was made about the program called “Romeo is Bleeding”  which followed Clark and students as they worked to address gun violence and spark communal healing.
The film’s executive producer Russell Simmons calls Clark “especially brilliant.” 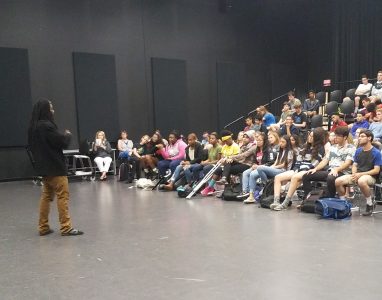 “I just want students to realize they can be agents of change,” says Raynor, “even if they feel like they don’t have a voice as a teenager, or they feel oppressed, or marginalized in that no one cares about them or listens to them. I want them to see someone who came through a lot and overcame a lot to be this leader. And to realize they all have that power within them, whether it’s through music or poetry or sports or anything like that. I just want them to be inspired.”