In her free time, Van Dusen pursues her passion for politics and education at the highest levels. She’s worked at the U.S. Department of Education, C-SPAN and the American Bar Association, gaining experience and connections that she brings back to her classroom. 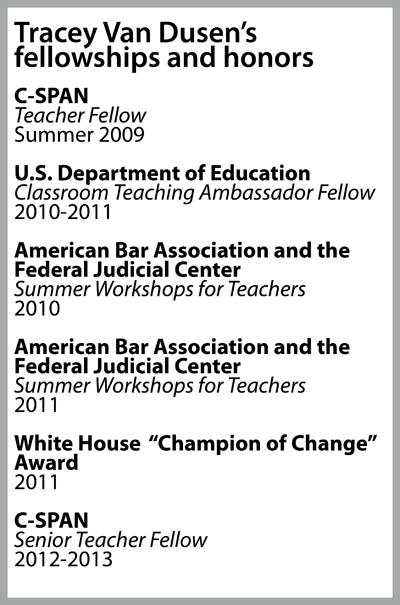 “It’s been really wonderful as a teacher to be able to talk to the kids after I’ve spent some time in Washington,” Van Dusen said. “I don’t know everything by any means, but at least I can talk about it with some understanding of being there and knowing how it works.”

Van Dusen first started working with C-SPAN in the summer of 2009 as a teacher fellow, helping C-SPAN’s educational team develop online resources for teachers. “It’s been a lot of fun doing (the fellowships),” Van Dusen said. “It’s connecting me with teachers around the country, and it’s also provided a lot of opportunities for my students.”

One of those opportunities is StudentCam, a national documentary competition C-SPAN sponsors. Van Dusen’s students have participated since 2009, earning honors and cash prizes every year.

“He’s one of the most accessible, down-to-earth, friendly people I’ve ever met,” Van Dusen said of Lamb.

Van Dusen describes herself as a huge fan of C-SPAN because its mission –– to offer unbiased coverage of Congress and U.S. policy –– fits right in with her everyday teaching.

Her goal is to help students become informed and understand U.S. politics from unbiased sources of information. “My own political views and opinions aren’t a part of the discussion,” she said.

Instead, Van Dusen encourages students to talk to their representatives, such as the time Congressmen John Dingell and Mark Schauer held a forum with her class. Or students follow election races in real time, such as the 2009 Virginia governor’s race, when Van Dusen collaborated on lessons and assignments with a C-SPAN teaching fellow who led an AP government class in Virginia. And this year, her students will make campaign commercials supporting the two presidential candidates.

“It’s very fun to be teaching AP government during a presidential election season,” Van Dusen said. “They’ll be watching the debates and the election carefully.”

Van Dusen can also talk with her students about running into John McCain at C-SPAN’s headquarters and meeting president Barack Obama at his January 2012 speech at the University of Michigan.

These are opportunities she wouldn’t have had without her first C-SPAN fellowship in 2009.

“I can’t say enough about what they offer teachers and what they offer the country,” Van Dusen said. “It’s truly a public service, and I hope to be associated with them for a very long time.”

Click here to see Tracey give a presentation about StudentCam