News Ticker
She plays with a quiet and confident approach – as one can clearly see by watching her play. She plays for not only herself but her team – which is clear when she talks about team-team-team. She spends a good part of her matches working on her game and not worrying about the score – let’s face it, there is nothing to worry about. And the results are off the charts – as one would expect.

Welcome to Kari Miller’s tennis world where the Pioneer junior is clearly one of the best – if not the best – singles player in the state.

Miller won the No. 1 singles state finals as a freshman before taking last year off from Pioneer to play in elite tournaments all over the country. This year she is back to playing tennis with and for her teammates and friends. 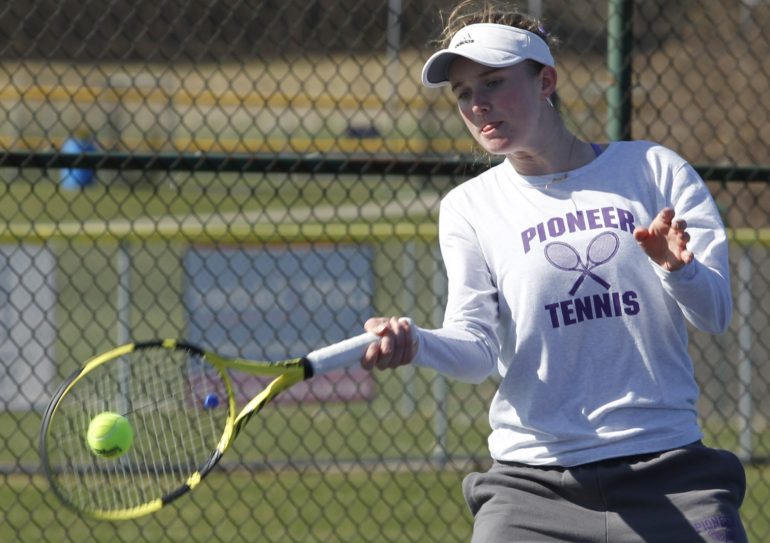 Miller said one of the highlights of winning the state meet as a freshman was the support she received from her Pioneer teammates. “It was a lot of fun,” she said. “We have a lot of traditions we do as a team before and during states and all my teammates supported me. It was a personal goal to do well at states but it still felt like I was part of a team because of their support.”

Miller entered her freshman year believing she “had a chance” at winning it all at states but also knew there would be some challenges to overcome.
“I knew I would be facing some really good players,” she said.

And there are two sides to a tennis court – physical and mental.

“We played two matches a day but I’m pretty used to that because the tournaments I play in are usually two matches so I wasn’t worried about being ready physically,” she said of the state tournament. “I put a lot of pressure on myself to do well and that’s where the mental side of it comes in.”

MHSAA has a rule that prevents tennis players from playing more than two tournaments outside of the high school season and that just wasn’t going to fit into Miller’s plans. Even though she was only a sophomore, she was already serving up plenty of interest from colleges and wanted to get that figured out sooner rather than later so she hit the tournament circuit.

Among her stops last year was a big tournament in Palms Springs, Calif., and others in Atlanta and Grand Rapids. “I did pretty well in all of them,” she said. “I was fifth or sixth in Palm Springs, I was second in Atlanta and third in Grand Rapids. Most of the players I played against were sophomores, juniors and seniors in high school.”

It was all about playing against elite competition for the Pioneer junior.

“I wanted to be playing as many high level tournaments as I could,” she said. “It was a lot easier this year to play (for Pioneer) since I’ve decided where I’m going to play in college.”

And it’s going to be a short trip.

“I’m going to Michigan,” she says proudly. “I looked at a lot of other schools but in the end this is where I always wanted to go. The coaches are good friends and they work really well together and Michigan always has one of the top teams in the country. I like their mindset. They want us to win but they are more focused on players getting better.”

Playing high school tennis is about two things, and neither of them are winning – although if she does the first two, winning will be the “net” result. “I am having a lot of fun but I’m also working on different parts of my game and trying to get better,” she says. “I understand that not every match will be challenging so I want to spend time working on specific things within my matches like coming to the net and attacking and my serve and return.”

“My dad’s sister was a pro and she was ranked professionally and was really good so it was kind of a family sport,” she says.

Miller, who easily took first at Pioneer’s invitational on Saturday, is back with her Pioneer family and it’s easy to see how happy she is to be here. And when she’s done being there – across the street – she hopes to turn professional and follow in her aunt’s footsteps.

“Assuming I have a good college career and keep improving, I will try to join the professional tour after college,” she says.